Connotative miniatures on the Gita

In its pithy communication, the Gita is a matchless piece of literature handed down to us through its ancient oral tradition reflecting on the essence of life. The Mahabharat, Prof Alok Bhalla in his 6th N C Mehta Memorial Lecture at the Institute of Indology observed last Thursday, is a horizontal narrative flowing on to what he called a ‘cataclysmic end’. A tiny part of it in relation to the epic whole, the Gita is a ‘pause’, self-contained with a structure that is non-linear and vertical with no obligation to move on to a conclusion.

Prof Bhalla’s focus was on the 570 miniature paintings on the Gita out of 5,500 painted on The Mahabharat. Commissioned by Rana Jai Singh of Mewar, they are believed to have been painted by an artist named Allah Baksh between 1680 and 1694. A Mewari translation of the respective shloka accompanies each of the selected paintings. In the book by the speaker soon to be published, he has translated it from Mewari, not the original Sanskrit, to English.

There does not seem to be any identifiable logic in the artist’s selection of the verses from the Gita. He has left untouched the entire opening adhyay of the treatise, for example. The whole endeavour, which has no earlier tradition, is primarily prompted by his faith. His second consideration seems to be the possibility of a symbolically rich visualization of what the couplet reveals to him as an artist. An author, poet and former faculty at CIEFL (Hyderabad), Prof Bhalla has an artistic sensibility and impeccable skills of articulation in English through which he has presented in his book his reading of each miniature painting  (37 x 24 cm in size). 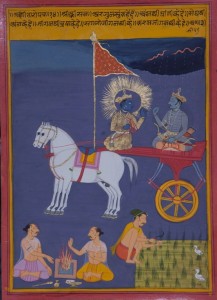 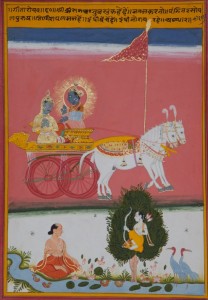 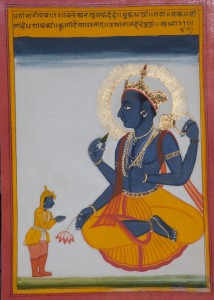 It was a subtly rich talk on the subject where he conveyed to the audience, which was not as large as expected for the event incidentally, his sense of what each miniature in a sample of half a dozen such paintings flashed up on the screen. Each work has two segments, one showing Arjun listening to Shri Krishna’s discourse, both unarmed. The other segment in the same miniature lays out the artist’s visual interpretation of what the text says. The knowledgeable speaker refers to the words, the human figures, the colours, the birds, animals and elements of nature, and the philosophy it represents.

In the visualization of the 60th verse of the 2nd Adhyay, for instance, desires overpowering reason has been suggested economically. In the miniature on the 14th verse of the 3rd Adhyay, the artist presents the celebration the rains bring, the yagnya for them, the food for life on earth and, as a result, the assured co-existence of humans and the animal world. You need an eye to see what the details connote symbolically.