Chandrabharti: conversations in classical and folk

A project by classical vocalist Tarjani Hirani, Chandrabharti is a beautiful meeting of Indian classical and Gujarati folk music. The tastefully arranged performance that opened at Abhivakti edition 2 pushed creative boundaries and emerged a winner. 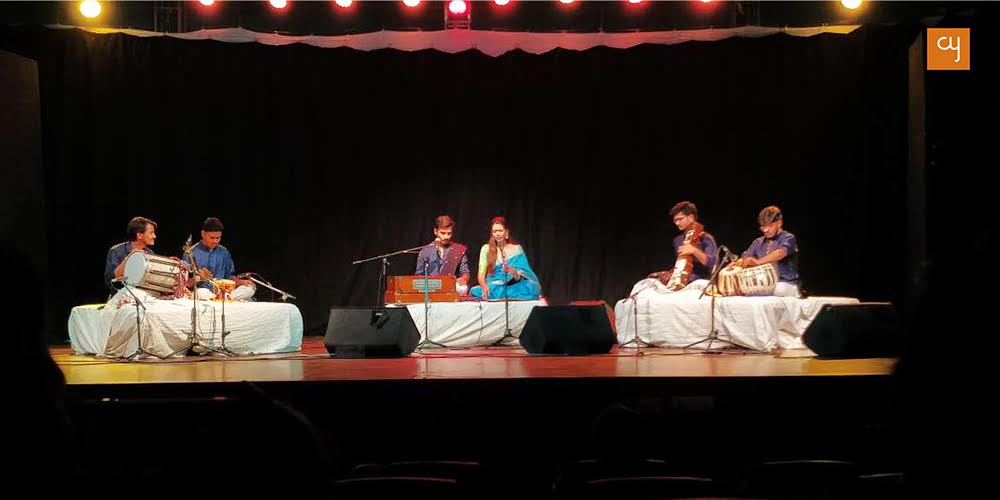 In Chandrabharti Tarjani Hirani skillfully exhibits the beauty that exists in the meeting of the opposites. In folk music, most of the meaning comes from the words while in Indian classical, particularly with Tarana form of composition the communication of emotion is through raag, the syllables that are part of it have no particular meaning. Hirani’s experiment was to use this contrast and give the viewers a completely new musical experience. Her brilliance shown in the manner she could set up a conversation between the classical musicians and folk musicians to make this possible.

The performance was tastefully arranged, with Hirani starting out in Raag Bageshree, a tarana “O De Tana Dere Na,” which blended seamlessly into Bharat Gadhvi’s folk composition, which was lighter and featured more elements of storytelling. The performance reiterated the fact that classical music does have its roots in folk.

One could see the effort that went into arranging these compositions. Hirani was singing the tarana in a 16-beat-cycle, the standard for many classical compositions, and towards the end switched to the more folk-centred 7-beat-cycle, when the dhol quietly took over from the tabla and Gadhvi took over the centre stage. This could have easily become a battle between folk and classical, but in these moments, one could really recognize it as a cordial conversation, a handing-off of a baton. The artists really thought about how to highlight the characteristics of each medium of music in the best possible way.

The audience is equally a part of the performance. When Gadhvi began his performance, the audience assumed an entirely new avatar from just ‘wah, kya baat!’, to shouting with abandon, laughing at lyrics, and appreciating the artist. The performance featured impeccable musicality on the part of the musicians, but this part of it was also quite enjoyable. The dual nature of the performance allowed people to experience a huge spectrum of emotions through music without the fear of being judged.

“Folk music and classical music each has its own identity so we had to work to not infringe on the ethics or rules of either.” – Tarjani Hirani

Tarjani Hirani is a trained classical singer with a masters degree in Indian classical vocals. She is currently pursuing her Ph.D from MS University of Baroda and undergoing music training in Mumbai. It is very evident in the ease in which she arranges and performs the compositions that music is a part of her family. Her father, Dr. Chandrakant Hirani is her guru and mentor. She has performed at prestigious platforms such as the TanaRiri Samaroh as well as the national levels for government youth festivals. The rest of the musicians in the ensemble also had a huge part in the show, each playing their own part to make the conversation flow smoothly. These included folk singer Bharat Gadhvi, Yash Pandya on tabla, Vanraj Shastri on sarangi, Nadim Mir on dhol, and Ishwar on percussions.

Don’t miss the next performance on Friday, May 10th at Bhavans at 9 PM. Open for all, no tickets necessary!