Dedicated to the mythological bird Jatayu from Ramayana, this new colossal sculpture is a ‘towering tribute to women’s safety and honour’. Even though Jatayu could not stop Ravana from abducting Sita, his sacrifice has symbolized valour and sacrifice for eons. 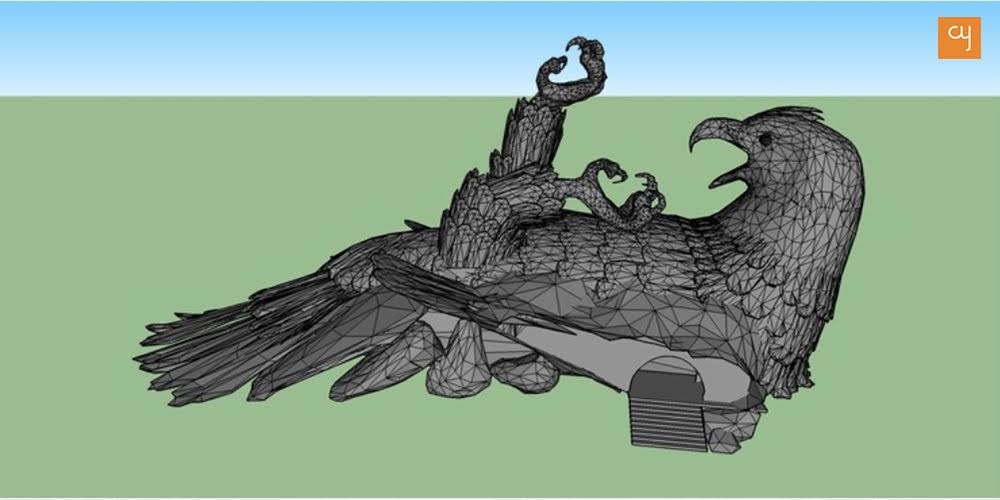 The bird, a vulture, is not standing tall with his head held up. He is lying on his back, defeated, and injured with a broken wing. He is seen shrieking, with curled talons, as he gasps in the final moments of his life. Despite this, he is still fighting to protect the woman Sita from being abducted, as he falls onto a rock. Standing as a symbol for the protection of women, this is how the artist-sculptor-filmmaker Rajiv Anchal envisioned Jatayu at the Jatayu Earth’s Centre in Kerala.

Rajiv Anchal is an eminent name in India’s Malayalam film industry. Back in 1997, his film Guru was chosen to be India’s official entry to the Foreign Language Film category at the Academy Awards (Oscars). The Jatayu sculpture is his contribution towards the larger discourse on women’s safety that is a burning issue in India these days. What Anchal has successfully achieved is to combine Indian symbolism with a contemporary social issue, and create an accessible work of art which has the promise to influence viewers’ mindsets. Anchal, who is also an art director and sculptor, has under his name other monumental works like the 40 feet Sakambhari in Alleppey and the Parnashala lotus at the Santhigiri Ashram, both of them in Kerala.

For the uninitiated, legend has it that Jatayu (a noble soul in the form of a vulture, as per the Indian epic Ramayana) lost his life during a battle with the demon King Ravana when Ravana abducted Sita, wife of Lord Rama. Ravana slit his wing, and it is believed that he fell on a rock in the heart of Kerala. 50 km from Thiruvananthapuram, in the Jatayu Earth’s Centre at Chadayamangalam, is said to be the exact spot where he fell. Here now rests a colossal sculpture of Jatayu at an altitude of 1200 feet, built in honour of his valorous act.

Barring the sculpture’s talons, which are made out of steel, the 200 feet long, 70 feet tall and 150 feet wide sculpture is made out of compacted concrete. This makes it the biggest bird sculpture in the world to get an entry in the Guinness Book of World Records.

As per the epic, Lord Rama receives vital information about Sita’s abduction from Jatayu. He recognises Jatayu’s valour and is said to have given ‘moksha’ (liberation) to the wounded and dying Jatayu. There is a mark of a footprint on site that is believed to be that of Lord Rama. The team behind the park has also built a temple dedicated to Lord Rama in the adjacent compound to retain the religious and historical connotations associated with Jatayu.

The project is a combined effort between Kerala Tourism and Anchal, who always dreamt of bringing this mythological hero to life since his days as a student at an art college in the 1980s. According to a Daily Mail report, although the project was approved by 2008, the work on it couldn’t start before 2011, and it almost took six years to build the statue and open its gates to the public in December 2017. The second phase saw the addition of a helicopter ride and cable car facility, and these were made open to the public in August 2018.

According to the official website, “the sculpture is a towering tribute to women’s safety and honour. Jatayu also represents a bygone era when humans, animals, birds and other living forms cared for each other and fellow beings and lived peacefully on this Earth.”

The statue is at the heart of the 65 acre large landscape of the park, which is also known as Jatayu Earth’s Centre. A major attraction here is the observatory located in Jatayu’s eye, from where visitors can enjoy a view of the nearby countryside that is full of picturesque valleys, mountains and green cover. Inside the sculpture, there is a functional multi-dimensional mini theatre. Within the sculpture, a multi-level museum is being developed, which will open in the next phase. Worth a mention is the world-class gondola facility and helicopter ride service that gives visitors a birds-eye view of the statue.

The makers envision the entire area to be a sustainable eco-tourism spot for national as well as international tourists. Keeping up with this philosophy, the park has a huge rainwater reservoir built on the hilltop with a storage capacity of 1.5 million litres of water. The water is used to develop the flora of the park and to promote organic farming in the adjacent cultivable land. The farmers sell the fresh organic produce to the visitors through a dedicated stall area created in the park. To further the cause of eco-tourism, the park employs solar energy to sustain its electricity needs.

The makers want the park to be attractive for all kinds of tourists and hence have added facilities and adventure activities to augment visitors’ experiences. Some of these activities include zip-lining, rock-climbing, etc. The park is open for tourists, and tickets can be booked online here.