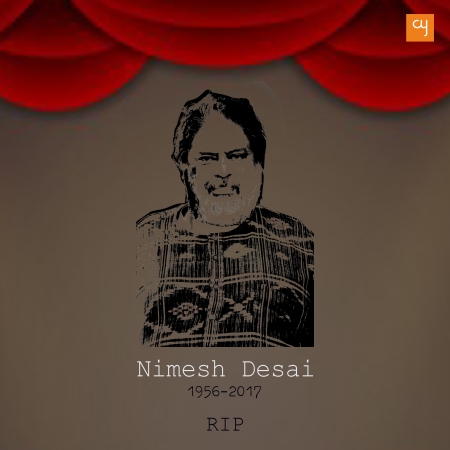 Veteran theatre personality, who invested around four decades of his lifetime uplifting the Gujarati drama industry by his immense contribution of more than 104 profound plays, has left for the heavenly abode on the wee hours of tuesday morning, November 14, 2017.

A product of FTII, Pune, even in his sexagenarian years, Desai, in 2016, returned to the Gujarati Film Industry breaking the prolonged nap of 37 years to present us his second film ‘Kookh’ a stirring societal drama on the topic of surrogacy. Leaving the creative fraternity teary-eyed, stalwart director, producer, actor and vocalist Desai has created more than 16 soap operas, 70 documentaries, four telefilms, including the Gujarati multi-star, eight state award-grabbing celluloid ‘Naseeb Ni Balihari’ featuring Smita Patil, Naseeruddin Shah and Om Puri. With numerous designations and myriad accolades, owner of distinct baritone, Nimesh Desai was honoured with State Excellence ward in 1992. He formed one of the largest theatre troupe in Gujarat inculcating more than 60 recitalists on board. Desai has been prolific in terms of production and direction of plays. He has never shied away from experimenting, commerce has not been kind to him, but his unwavering enthusiasm towards the stage remained undeterred. Some his popular works are Yerma, Exception, Waiting for GODOT, Veronica’s Room and more.

Desai is also loved for his contribution as a theatre ‘guru’. Under his guidance a lot of actors have found knowledge and passion for the craft. The stalwart creator’s enormous legacy will forever stand tall reflecting his stature.