Theatre Olympics comes to the Heritage City of Ahmedabad

After travelling to Poland, China, South Korea, Turkey Russia and Japan the monumental performing arts festivity, Theatre Olympics has arrived in India to commemorate its 8th edition. The 51 days long celebration of dramatics has been brought to us by the National School of Drama in Delhi and was inaugurated on February 17th 2018 at the Red fort in Delhi. The theme of 8th edition is of ‘Flag of Friendship’ and it aims to foster exchange between Indian and International performing artists. Apart from main events in New Delhi, 16 other cities across the length and breadth of India are also playing hosts to the Theatre Olympics. Ahmedabad is one among them.

According to Bhargav Thakkar, the chief technical coordinator of the festival in the city of Ahmedabad, “For the first time Theatre Olympics is travelling to more than 17 cities of various states of India, making it the largest one in the world in terms of expanse. It is expected to touch the lives of more than 25,000 artists who are participating in more than 450 odd performances out of which 75 of them will be arriving from 30 different countries.” The grandeur performing arts festival has listed Ahmedabad among other cities like Chandigarh, Guwahati, Patna, Jammu and others. The citizens of the World Heritage City will be able to witness 15 International and Regional play performances starting from March 24 to April 7 every day at 9.00 pm at Tagore Hall in Paldi. The schedule includes some great plays like Radha Raja Reddy’s ‘Bhagavadajjukeeyam’, which is also the inaugural play, to Bhanu Bharati’s ‘Tamasha Na Hua’  and the popular German play ‘Edith Piaf’. More than 700 people can witness the shows without any entry tickets, but the audience will have to register themselves and get an access pass online.

Apart from the main shows at Tagore Hall, Theatre Olympics will have a host of allied events that will include masterclass, workshops and talks with luminaries. These are scheduled at JG College of Performing Arts, Drive In Road. Popular personalities of Gujarat including Janak Dave, Kumudini Lakhia, Manoj Joshi, Utpal Bhayani, Gopi Desai, and Siddharth Randeria will participate as part of the event.The initiative in the city is made possible by collaborating with the NSD(National School of Drama) New Delhi, Ahmedabad Municipal Corporation and Gujarat State Government.

Suresh Bhardwaj, the Festival Convenor present during the press conference shared, “Our theme for the festival is ‘Flag of Friendship’ and through this, we want to give a message of friendship to the globe.” The festival wants to give its audience a multilingual experience, and so the viewers will be exposed to Marathi, Telugu, German, Bhojpuri, Hindi, Rajasthani, Brij, Mewatim Assamese and Kannada plays. We are keen to see the audience participation for such wide variety of non-gujarati theatre.

Initiated in 1993 in Greece the gathering was meant to create international cultural connections and has now grown to be one of the world’s largest platforms where masters, apprentices and aficionados from across the globe meet to share theatrical exchanges and converse to go beyond the ideological, cultural and lingual bondages. Kicked off on February 17th in Delhi in the presence of Prime Minister Narendra Modi the 8th edition of the Theatre Olympic will culminate in Mumbai on April 8, 2018, in Mumbai in the presence of President Ram Nath Kovind.

The selection of Ahmedabad among other 17 cities is a sign of cities growing interest in global and multi cultural creative content. Ahmedabad has always been on the forefront of economic ties and collaborations with multi cultural entities, it is about time the city sees similar value in cultural exchanges with art and artists from all across. It is a big opportunity at the doorstep of Ahmedabad and citizens should make most of the happenings in fueling their creative energies.

Here is the full schedule. More can be viewed here. 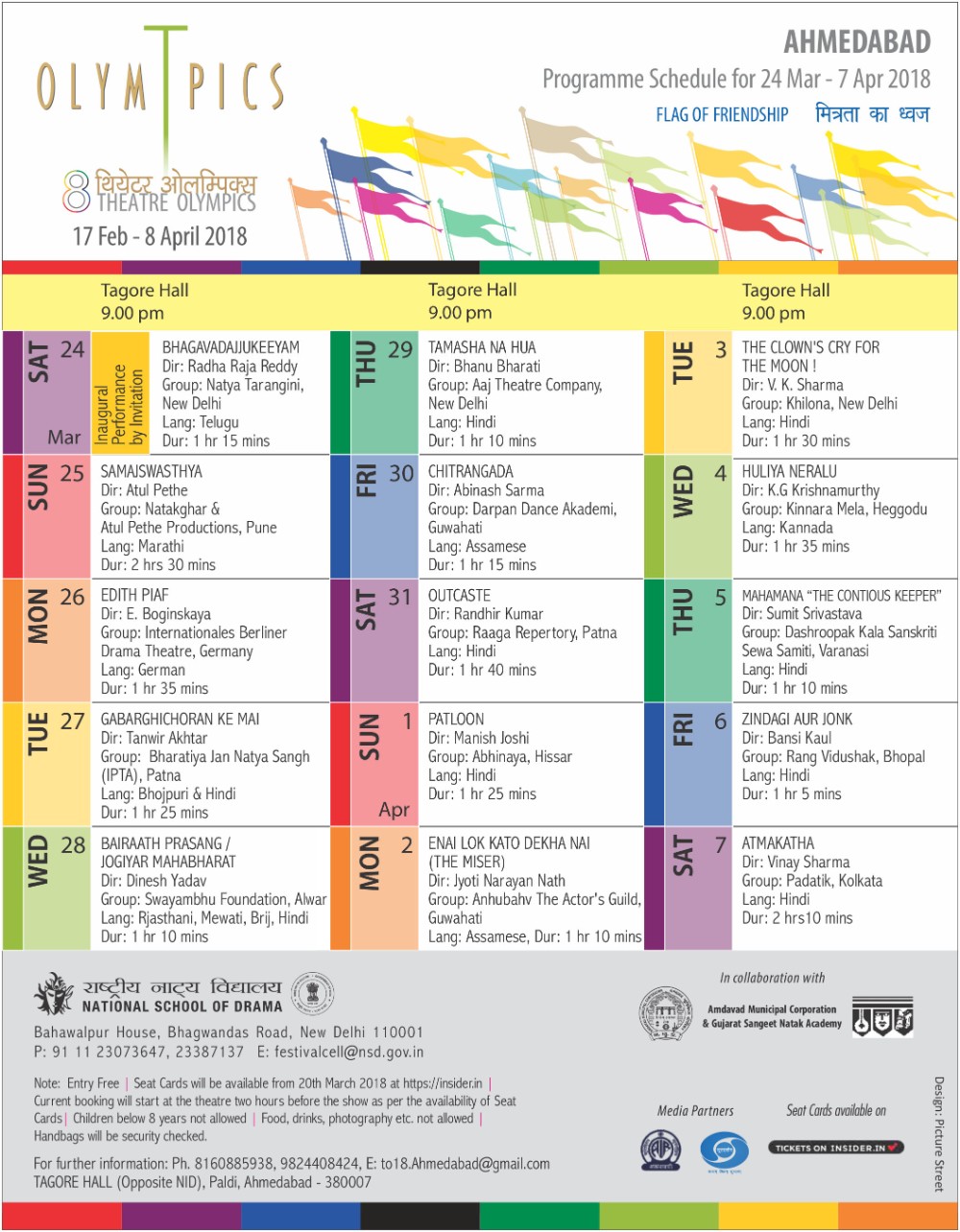