From mental health to governance, social media is impacting your life and safety

Celebrating World Social Media Day, experts from all over India came to ReDi 2018 to discuss the epidemic of fake news, cyber-bullying and digital strategies. Through interactive workshops, people learned how to effectively write, tweet, make YouTube videos and manage websites.

Social Media and the Digital World are inseparable aspects of the contemporary citizen of the world. Like every new step in human evolution, these too have their pros and cons. As wrongly motivated influencers rise in power, and user discretion falls, these two threads beckon urgent attention and dialogue. Only once these are addressed will we make the most of this fantastic human innovation. On the occasion of World Social Media Day on June 30, ReDi Digital Dialogue promoted discussions on how to be responsible digital citizens, touching upon various aspects of social media literacy. Speakers from Twitter India and UNICEF India discussed how social media can be used for good, even in governance and social causes; while creators from GoDaddy and other digital platforms helped people learn how to create effective online content through writing, tweeting and video-making.

The 6th edition of the programme was organised in partnership with UNICEF India by Simulations PR, Communicate Karo and Tej SolPro jointly. It brought together a number of journalists, bloggers, entrepreneurs, marketing experts and social media strategists from all over India at Hotel Crowne Plaza.

The day’s happenings began early with an energetic workshop conducted by Amitabh Kumar of TweeSurfing. TweeSurfing is an online social media platform that popularises the word about safe online surfing, in association with Twitter India. Kumar spoke about how to create productive tweets within the limit of 280 characters, in the simplest way possible. He advised, “Post only single-themed content from a single account. It defines the professional identity of the account. Tweeting more will not get you, followers. One has to tweet right to catch the targeted audience. There are specific timings to tweet on topics. Tweets related to sports and politics are more likely to receive active responses between 6:00 am to 8:00 am, and 1:00 pm to 3:00 pm, respectively.”

A workshop taken by digital media expert Digital Pratik touched upon how to create effective audio-visual content for YouTube. He said, “People spend around 45 minutes to 1 hour every day on social media. It’s they who have to decide what they want to consume. So don’t be a cliché online.” A workshop by Gaurav Nakul of web hosting company GoDaddy encouraged audiences to bring out the secret digital entrepreneurs that dwell within them. Nakul especially highlighted how the services of GoDaddy-Pro help both techno-savvy and non-techno-savvy people operate their websites.

Seats were packed for an 11:00 AM workshop taken by Creative Yatra, called Carving Out an Original Online Identity. Conducted by the platform’s Contributing Editor Niharika Sanyal, and aided by its correspondent Himanshu Nainani, the workshop discussed creative writing for the web. The facilitators emphasised that, instead of following trends, one should seek out an original identity. They urged people to explore ‘what’ they write about and ‘why’. Co-founder & Chief Content Curator of CreativeYatra.com, Mihir Gajrawala also engaged with workshop participants by sharing examples of CY’s curatorial philosophy, which have helped it achieve its unique identity among readers.

The impact of digital trends on mental health and brand value

Post lunch, a speech by the founder of Simulations PR & co-organiser of REDI Digital Dialogue Shailesh Goyal on ReDi’s objectives was followed by a line-up of enriching panel discussions. He spoke about the significance of Digital Media in today’s world and the significance of having a dialogue around it to foster an efficient digital scenario. Mental Health In a Digital World was a panel discussion comprising of Safecity founder Elsa D’Silva, Editor of Bonobology Raksha Bharadia, MICA Professor Dr Falguni Vasavada Oza and psychiatrist Dr Vinod Goyal. Lawtoons founder Kanan Dhru moderated the session. The discussions touched upon how to make safe digital spaces that are free from trolling or ‘cyber molestation’. In Elsa D’Silva’s words,”Anything happening to you online is happening to you in real life. A rape threat should be taken seriously and reported because the cyberspace is an extension of your physical space.”

A discussion on Digital Trends 2018 & Its Impact on Consumers & Brands took place between co-founder of Creative Yatra Mihir Gajrawala, founder of Jolly Food Fellow Niraj Harlalka, The Hindu journalist Mahesh Langa, social media solutionist Gurnoor Kaur Behl and Ciceroni’s Strategy & Operations Head Falguni Patel. The session was moderated by social media strategist Kumar Manish. Promotions can become opportunities for brands to build a relationship with their clients, the panel argued. And brands need to make sensible content instead of following celebrity-driven trends. What also emerged from this discussion was an acknowledgement of the rising popularity of video content and its potential to drive digital marketing in times to come.

Using social media for good, in governance and private life

Stephanie Raison, Communications Specialist of UNICEF India, brought a perspective to the fore that might surprise some people. She feels that children should not be denied access to social media portals. While talking about cybersafety, she argued about the importance of allowing children to have digital access. They not only gain knowledge in this way, but can also communicate with various people with whom they would not otherwise be able to interact. She said,”Instead of refusing children access to social media, parents should discuss their digital experience with them and monitor the access accordingly.”

The keynote speaker of the evening was the Head of Public Policy of Twitter India, Mahima Kaul. Kaul discussed how civic bodies, politicians and semi-government bodies are using Twitter to communicate with civilians. Ahmedabad Police and Mumbai Police, for instance, are trying to manage road traffic by taking online feedback from locals. Kaul advised people to “use Twitter as a workplace and not just a medium of interaction.” Along the same note as this, Harpreet Dhody helped people understand how smart the tactics of online political campaigns are. Dhody is the Communication Advisor to the Government of Chhattisgarh and came equipped to share various digital marketing strategies. He explained that it’s becoming increasingly important to drive positive emotional engagement towards government entities and politicians.

The day’s events concluded on a promising note, with an award ceremony called ‘ReDi4GoodAwards’, supported by Oxyzen Financial. One of the trophies went to Hitarth Sheth, a 15-year-old entrepreneur who has developed 12 apps, including the Gujju Student App. The other trophies went to Rakesh Patel of Masti Ki Pathshala, a Godhara-based school that raised funds through social media; and to Amul.coop, the company that brought the White Revolution to India.

ReDi 2018 became an opportunity for participants to network with experts. For some, the event helped them understand the potential to use social media in a professional manner, by making their accounts more than just platforms for interactions. The official hashtag of the event #Redi2018 trended on Twitter the entire day as people posted their impressions of the event. 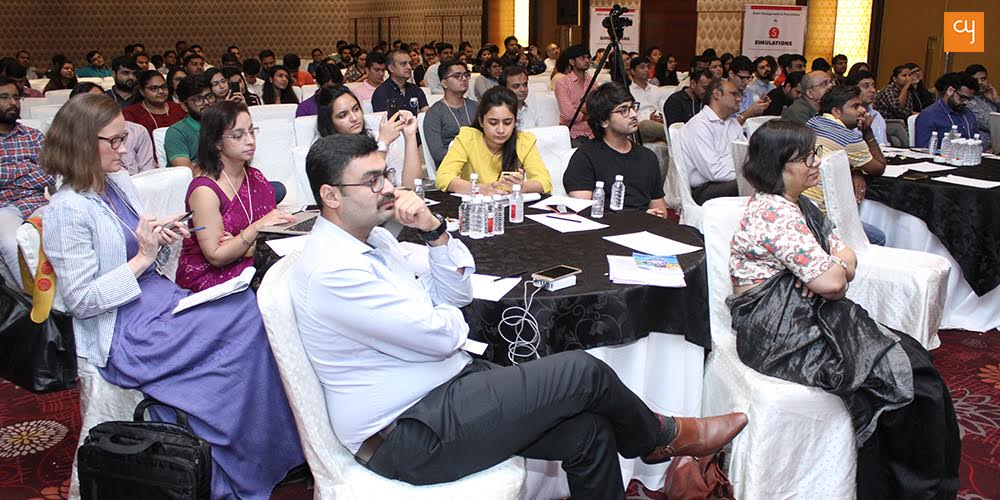 creativeyatra.com was a workshop partner for REDI Digital Dialogue 2018