‘Saptak’ to pay tribute to Pt. Ravi Shankar on its 40th Anniversary 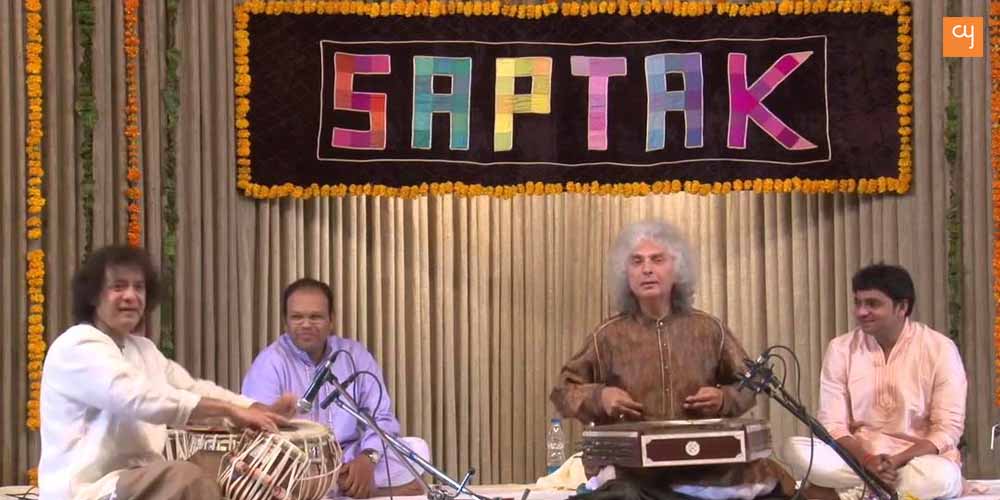 Saptak is an annual music festival that celebrates our rich heritage of classical music. The first edition was held in 1980, this year will be the 40th anniversary of the festival. So, what surprises have they planned for us this year? One of India’s most-prized assets is its Classical Music. Embodying the legacy passed down from our ancestors, classical music has been incredibly well-preserved through time, with its practitioners following techniques and instruments that were developed millennia ago.

To commemorate and rekindle the love for this great art, Saptak School of Music organises an Annual Music Festival which congregates pioneers of Indian Classical Music from all around the country. The festival also becomes a platform for the students at Saptak to showcase their skills.

2020 will mark the 40th Anniversary of the longest festival of Classical Music in India. For 40 years Saptak has been mesmerising, entertaining and inspiring people through the sheer force and elegance of classical music.

Crossing such a big milestone, the organisers are taken back to the first concert which was inaugurated by Pt. Ravi Shankar.

“We are also celebrating 100 years of Pandit Ravi Shankar. His was the inaugural concert in 1980. So, we decided to dedicate this year’s festival to him. We are creating a pen drive comprising audio recordings, video clips and a life sketch on the Bharat Ratna awardee, which will be screened at the venue every evening. It will be released by Pandit Jasraj, who is entering the ninth decade of his life,” said Prafull Anubhai, the Hon. Director of Saptak Archives and a member of the Governing Council of AES (Ahmedabad Education Society), as quoted in Ahmedabad Mirror.

The festival will be hosted from January 1 to January 13 at the L.D. Arts College Campus, Ahmedabad which will include 43 performance sessions divided into morning and evening sessions. Some of the classical music connoisseurs sharing the stage include Pt. Shivkumar Sharma, Pt. Vishwa Mohan Bhatt, Pt. Ulhas Kashalkar, Ustad Amjad Ali Khan and Vidushi Shubha Mudgal.

“We are also hosting the Japanese duo, Takahiro Arai (santoor) and Hironori Yuzawa (tabla), and Josh Feinberg (sitar) from the U.S. Besides, we will have about five Jugalbandi acts. In Carnatic music section, we will have T.M. Krishna, Jayanti Ravi and Vidwan R Kumresh. We will also host eight pakhawaj players,” added Anubhai in the same quote.

Classical music is ingrained in our culture for years yet very often it goes unnoticed. But with festivals like Saptak, we can see the effort towards bringing it back repeatedly to the forefront, a much-needed reminder of the rich history of music for all of us.