Saptak 2018 – Announces its 38th edition with some new offerings 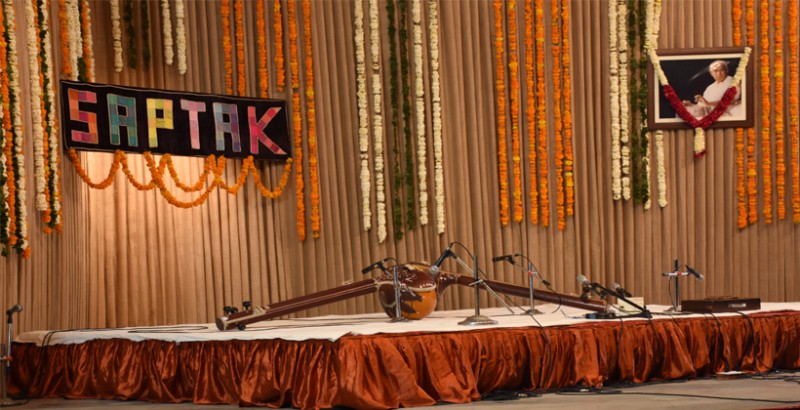 India’s first World Heritage City welcomes the world’s longest classical music festival of Saptak Annual Festival yet again. Unlike the deafening musical revelry across the globe, Saptak School of Music every New Year invites more than 200 maestros of Hindustani Classical Music to perform 56 musical sessions from January 1 to 13 at Amrut Modi School of Management. The 38th edition of the annual music festivity announced additional features this year. Director of Saptak Archives, Prafull Anubhai announced about addition to the the recreational food stalls, in addition to the popular Paan and Kesar Doodh (Saffron Milk) stalls that are a regular at Saptak. The audience will have more options to warm up in chilly nights of January. Winter is predicted to reach its peak, and classical music connoisseurs will be seen relishing the traditional aromatic foods as they indulge in conversations amidst the background scores of Dhrupad, Khayal, Thumri and various genres of different gharana.

The partial artist line up announced during the discussion came forward with a brand new surprise. For the first time in its history of 37 years, Saptak is will have performance from artists like – Sitarist Anupama Bhagwat, Flutist Debopriya Chatterjee and Tabla Player Anuradha Pal. Along with a Thumri show performed by Pandit Channulal Mishra in collaboration with Lt Girija Devi’s students Sunanda Sharma and Malini Awasthi. The 37th edition aims to pay tribute to the contributions by women artists in the Hindustani Classical Space. Last year Saptak gave a tribute to Pt. Omkarnath Thakur, and a special film and recording was played for the audience to relish.

Citizens of Ahmedabad can have a retrospective experience of the Saptak legacy through its newly organised project of documentary screening titled as ‘Saptak Ka Beeta Pal’. The open for all video screening will be conducted from 5:00 pm to 06:30 pm on pre-registration basis along with the restart of Ustaad Fazal Qureshi’s ‘Taal Vadya’ series.

Organizers are delighted to see the city youth enthusiastically engaging in the classical music scenario and thus to amplify the charm of the festival they have brought around eight duet performances including three performing-arts acts of veteran Kathak artist Pt Birju Maharaj along with Kuchipudi performer Smita Shastri and Kashmiri folk artists Gulzar Ahmad Gannie and orchestra. Stay tuned on CreativeYatra to experience the Saptak charisma of 2018 thoroughly.