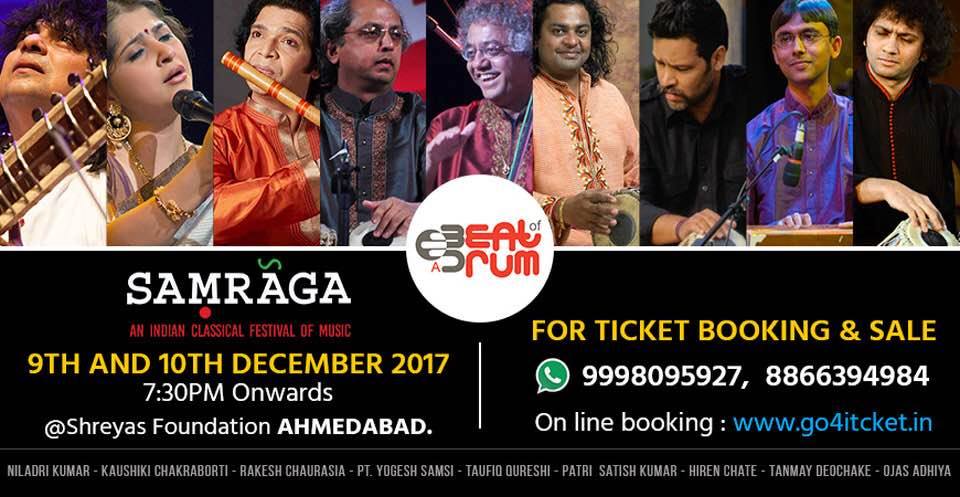 Crraft of Art’s Water Festival and Sufi Festival has already amplified the moods of Amdavadi music lovers, and Samraga is all set to amplify it to the next level. With only three weeks before the start of World’s longest and most extensive Hindustani Classical Music Festival of Saptak, Beat of a Drum is coming with Samraga Music Concert which is also an Indian Classical Musical Festival but with a diverse flavour of artists, aesthetics and vision. Scheduled on December 9 and 10, 2017 in the beautiful amphitheatre of Shreyas Foundation, Samraga is the brainchild of Tabla player Hiren Chate who wanted to spark the minds of Amdavadi contemporary youth with the rich heritage of Indian classical music.

The 1st edition of this culturally affluent concert is lined-up with reputed recitalists and the inaugural sessions on Saturday, will begin with a collaborative performance of sitar instrumentalist Niladri Kumar, eminent Tabla player Pandit Yogesh Samsiji, maestro flautist Rakesh Chaurasiya and Beat of a Drum founder Hiren Chate. Whereas the second day will be garnished with a musical act by Patiala Gharana vocalist Kaushiki Chakraborty, vocalist and virtuoso percussionist Taufiq Qureshi, and Carnatic mridangam player Satish Patri Kumar along with prodigy percussionist Ojas Adhiya and harmonium artist Tanmay Deochake.

The organisers of the event Hiren Chate and Chintan Shah from CS Production House are planning to extend the two days festivity into a four days affair where enthusiasts can have an opportunity to meet the aficionados and performers through workshops, discussions and talks. The vision of creating a traditional music community in Ahmedabad is remarkably thoughtful and eccentric.

Tickets of the Event can be availed from here