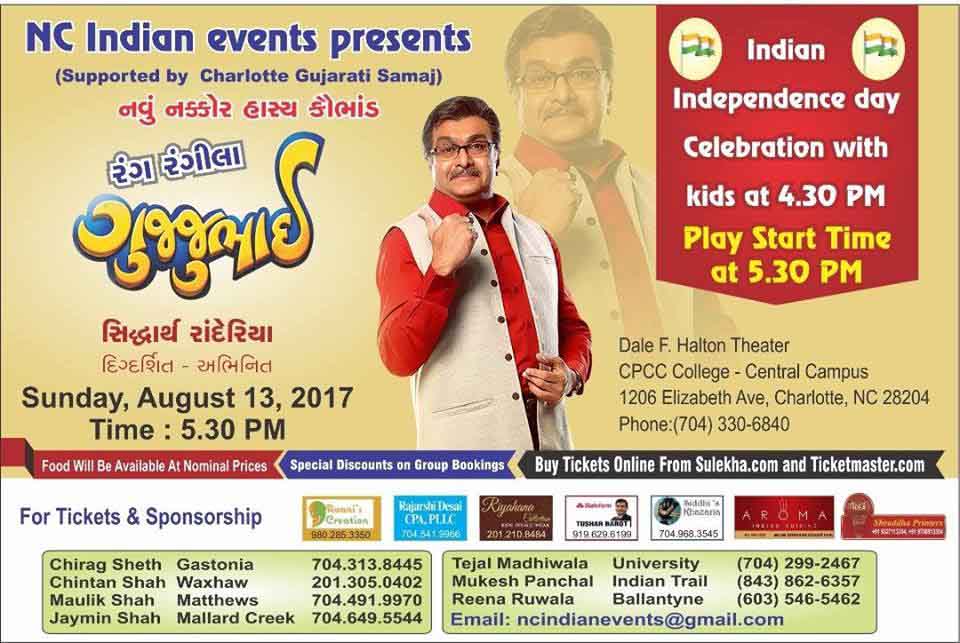 The Gujjubhai series of play is a hit all across the globe since a long time, and the most anticipated part comes, when it is being performed in Charlotte, USA to celebrate the Indian Independence Day weekend. the play is scheduled to be performed on August 13, 2017. The event will be a best of both worlds since it will not only help the Indian-origin families to mingle with other families staying together oceans apart from their homeland but will also grab the gilded opportunity to revive the culture and essence of the East back in their hearts, throbbing in the west.

Showcasing at Dale F Halton Theatre, NC at 05:30 pm, Rang Rangila Gujjubhai is a laughter riot drama. A part of the Gujjubhai series and featuring actor Jaydeep Shah and the famous Gujarati recitalist, Siddharth Randeria, who is also synonymous with the title of ‘King of Comedy’. Randeria has been into the theatre industry for more than 35 years now and has delivered 25 blockbuster productions including Gujjubhai The Great, which became the only Gujarati play to reach 800 shows across the globe.

In Rang Rangila Gujjubhai Playwright Pravin Solanki and director, Siddharth Randeria has narrated a barrel of fun plot, which describes the milieu of a typical Gujarati family, with soaring high ambitions and always thriving to achieve a bigger and better lifestyle. A full-fledged family show that can be enjoyed by an eight-year-old to an eighty-year-old.

The play is being brought to Charlotte by NC Indian Events, they have been at the forefront to bring good quality and diverse Indian events in Charlotte. Since this coincides with Independence Day of India, the organizer has set up special festivities wherein children can come and participate in the Independence Day celebrations. The families can bring the children early, an hour before the play starts, and let them be part of the Independence day celebrations that are planned at the venue.

Details and Bookings can be done here