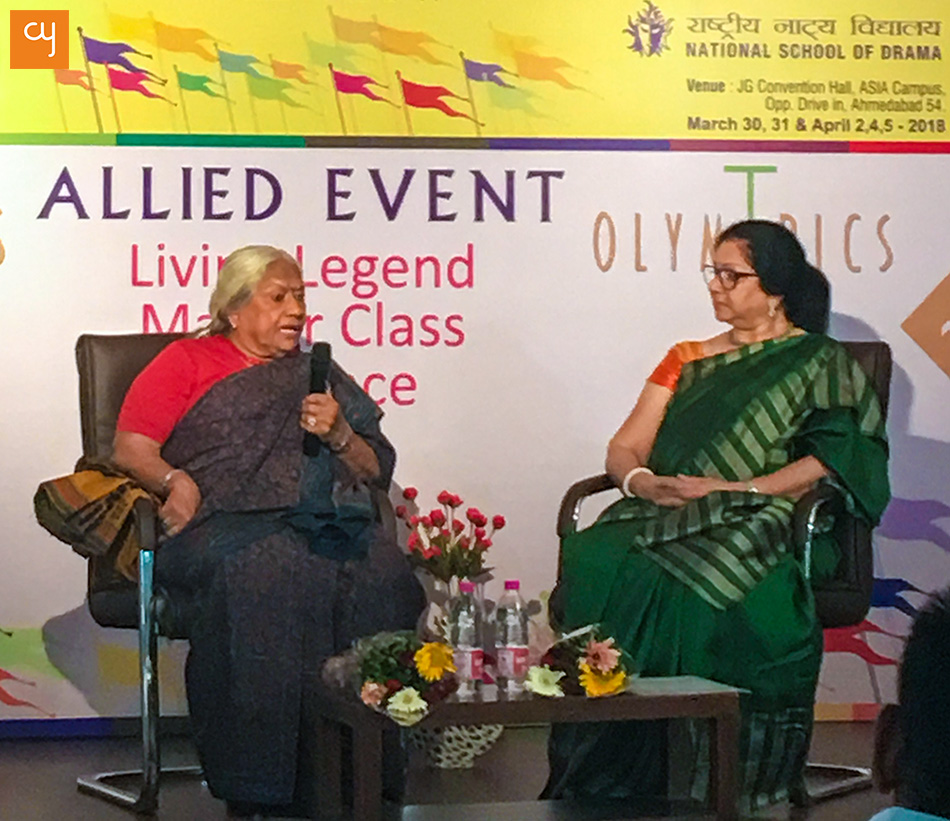 “You like going to the temple because it enhances your five senses. Similarly, dance must be felt – it must invoke all your senses.”So believes Kathak choreographer Kumudini Lakhia who spoke at a masterclass organized at JG College of Performing Arts in Ahmedabad on the 6thof April. For Lakhia, a performance needs to be smelled, touched, heard, felt and tasted. Dance, for Lakhia, is not merely a physical form of representation; it is more like meditation, wherein you are constantly aware of your five unique senses. When you dance with all your heart, it brings you “closer to God.”

The masterclass was organized as an allied event as part of the 8th Theatre Olympics, which has travelled across the country from February 17 to April 8, 2018. The Theatre Olympics was hosted by the National School of Drama and the Ministry of Culture and was themed ‘Flag of Friendship’ this year, to celebrate human values. This masterclass with Kumudini Lakhia was held for artists who wish to excel in music, dance and drama.

Lakhia, who is fondly called Kumi behen, is one of the first persons to have reimagined Kathak within the contemporary context. She never caged herself to the conventional modalities of Kathak, which gave importance to symbols and ‘Mudras’. While these things can serve as sources of inspiration, she believes that love and strength come from within. Lakhia did not limit herself to the preconceived vocabulary of Kathak that was served to her, and constantly asked herself, ‘Where do I go from here?’ In the 60s, her thought process was path-breaking. Lakhia is also known for converting Kathak into a group spectacle, thus moving beyond its traditional format of solo performances.

“Traditions are our roots. They don’t restrict us in any way. Instead, they allow for innovation,” she said, “But conventional Kathak depended on rigid traditions so I opted to depend on traditions that allowed for innovation.”Lakhia started Kadamb Centre for Dance in 1965 in Ahmedabad to free Kathak from its restrictive practices.

The 87-year-old guru shared her wisdom over this hour-long discussion, recounting humorous anecdotes to a young audience that intermittently burst into laughter and enthusiastic rounds of applause. What I found most striking was her explanation of the “three stages” of creating art, which she feels that every artist must learn. The first stage is the process of learning. The second stage is the process of practice, which is also known as Riyaz in Urdu, which she believes is the most important and essential stage. And the third stage is the process of performance. When all these processes have been performed satisfactorily, that is when a person truly creates something. Creativity is not a God-given gift; it is acquired with practice – “It is the last stage and it comes with experience, and experience comes with Riyaz,” she said.

At the masterclass, Lakhia probed the audience to question whether dance as an art form needs to be dependent on literature. If so, then every act or performance needs to depict a story. But Lakhia believes that dance can be abstract as well; that the audience can find its own meaning and relations, and experience catharsis in the process.

Acknowledging that “speaking all the time is boring,” Lakhia gestured to one of her students Rupanshi to come on stage and perform – to demonstrate how a performance of Kathak can truly affect the viewer. Rupanshi explained the concept of ‘Atha Kim’ through her performance. Atha Kim is a dance choreography by Lakhia that was first introduced in 1982. As one of the best choreographies ever done by her, it is surely Lakhia’s claim to fame. Through her beautiful performance full of expression and complex footwork, Rupanshi pointed out when the ‘sam’ (the first beat) comes, and when she can take the liberty to dance to the ‘taal’ (rhythm). I was amazed, seeing how graceful an art form Kathak is. I’ve always wanted to learn a traditional Indian dance form but could never do it. Kumudini Lakhia’s masterclass left me with the feeling that it’s never too late to learn something new.

The master class ended with a standing ovation by the audience. I must say, if you are seeking to learn Kathak, Kumi behen is your solace.