On the 93rd birth anniversary of Gujarati poet Niranjan Bhagat, his fans and friends celebrated by establishing a trust in his name, which will promote the literature of Bhagat and Tagore. Bhagat’s rare poetry collection was released and the concept of ‘Niranjan Cafe’ was announced. 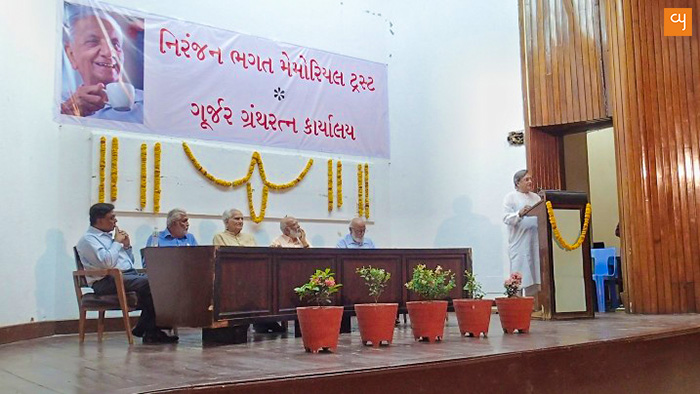 Niranjan Bhagat was a modern legend of Gujarati literature. To remember the Sahitya Akademi Award winning poet on his 93rd birth anniversary, the literature fraternity gathered in the early evening hours of May 18 at the ATIRA Auditorium.

The fraternity honoured the noted academician by establishing the Niranjan Bhagat Memorial Trust, and remembered him by playing recitations of his works pre-recorded in his own voice. The core committee behind this initiative, which will handle the trust’s activities, comprises author Shailesh Parekh, entrepreneur Pavan Bakeri, educationist Praful Anubhai, Chintan Parikh, Sandip Bhagat, and Bhagat’s five friends and family members.

Author Shailesh Parekh spoke, “I strongly remember that Niranjan Bhai was willing to have his anthology published in his last years. Thus on this hearty day, the trust and Gurjar Granth Ratna Karyalaya are releasing an anthology, which consists of a collection of 30 original poems by Niranjan Bhagat. These are published under the title Antim Kavyo (Last Poems).”

Niranjan Bhagat was an English professor in a leading arts college of Ahmedabad. In educationist Praful Anubhai’s words, “The poet exhaustively contributed to both English and Gujarati literature. The memorial trust will therefore work to revive his literature in both the languages.”

Chintan Parekh also announced the concept of a ‘Niranjan Cafe’, “Niranjan Bhai loved sitting at Havmor and talking to his colleagues about world poetry and literature. Thus, through Niranjan Cafe, we will invite students, friends and lovers of Bhagat’s poetry to casual eateries around Ahmedabad, at least once a month, to remember him and his works.”

Bhagat was a connoisseur of Rabindranath Tagore‘s literature and wrote more than 100 English poems in Gitanjali style. Eminent poet Sitanshu Yashaschandra said that the board of Niranjan Bhagat Memorial Trust would also promote the Tagore style of literature.