Literati gather to discuss man’s search for truth, with Rajdeep Sardesai and Devdutt Pattanaik, on the third day of GLF 2018. 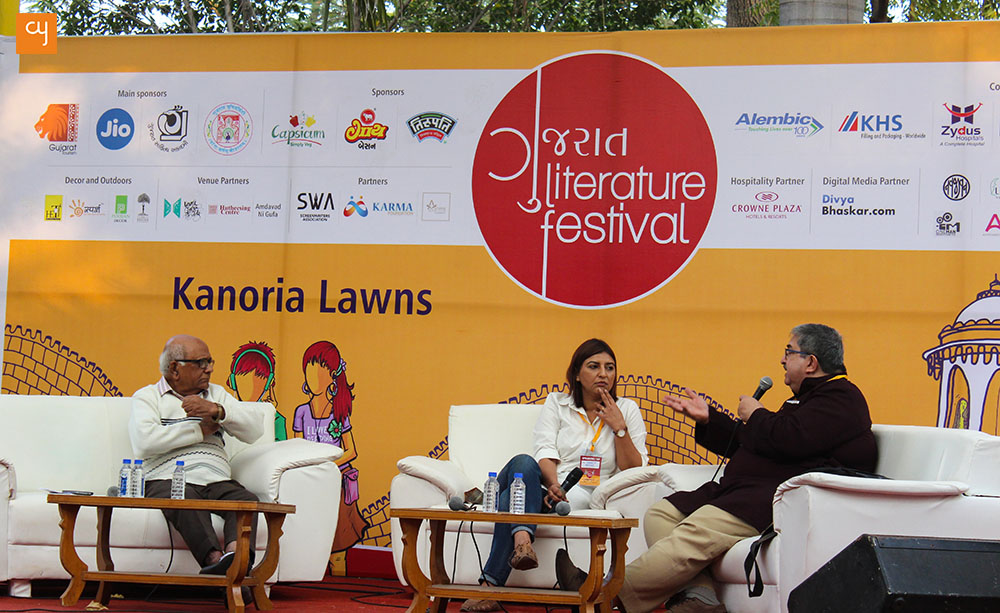 Take it from someone who calls herself a poet: there is nothing as beautiful as the sight of a poet reading out his work and the sound of people simultaneously saying “AHA”!

It seemed to me that the third day of the Gujarat Literature festival saw every person who visited not wanting it to end. It was a full house at all three venues of the Festival; be it where ghazal kaars talked about mythology, entrepreneurs about their love for literature, or authors about translation. And like children waiting for an autograph in line, the evening saw a crowd gathered in two queues, eagerly awaiting author-mythologist Devdutt Pattanaik, and celebrated newsman Rajdeep Sardesai.

When it comes to creating an aura, Devdutt Pattanaik stole the show. In an auditorium filled to the brim with avid readers and fans, Devdutt walked in alone, and talked for an hour about what he’s been exploring through stories and mythologies.“The first time man asked the question ‘Kya tha?’ was when the answer and the word ‘Katha’ was born.” Pattanaik’s opening statement left every person spellbound.

‘Mithya’, he said, is subjective truth told through the eyes of a man, a woman, animals, birds or even plants. ‘Subjective’ is the keyword here. “It is a person’s truth, it is the truth they have seen and experienced and known, but being a human being and being given only one set of eyes, that is all the truth that we can see. It is but one part of the reality. It is when we start debating one part with another and insisting on proving our end of the stick right, that a country like India becomes not only angry, but obsessed with religion and mythology.”

Drawing from his comprehensive grasp on the mythologies of the world, Pattanaik shared that it is, very fascinatingly, only herein India, that all nine rasas are present not only in mythology but across all forms of storytelling. Navrasa, as defined by Bharat Muni in Natyashastra, a Sanskrit text on performing arts, is the aesthetic flavour of an art form, the feelings and emotions they generate. According to Pattanaik, if we, as a nation, can put all nine rasas in a story, we become capable of seeing a person and his/her truth as having as many facets as these. 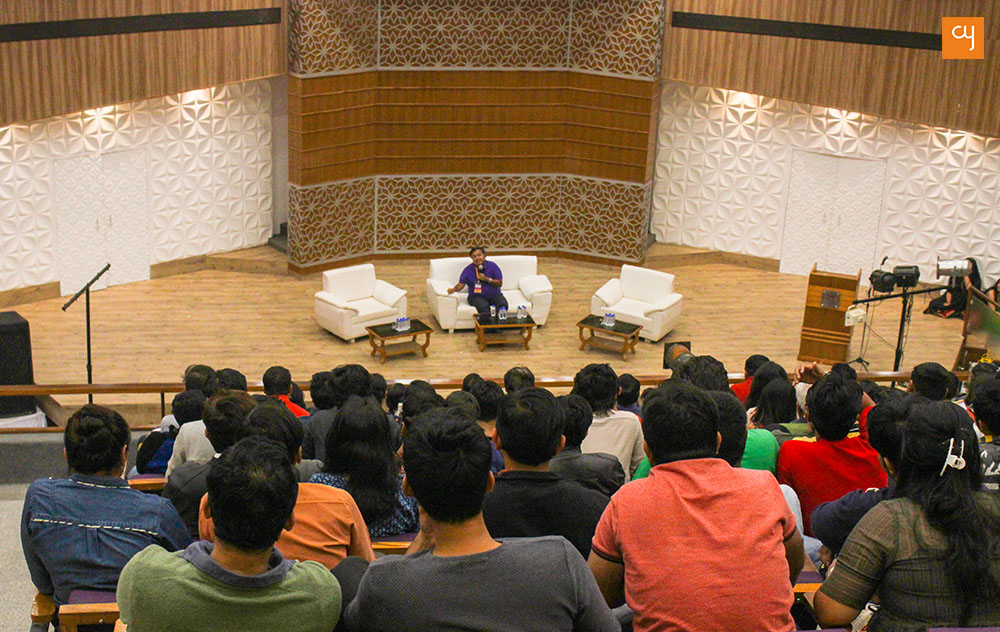 In the last session of the Gujarat Literature Festival, Devdutt Pattanaik was both humorous, as well as political. From anecdotes of a recent trip in Cambodia to a story of an Indian reader’s rage, who  accused Devdutt of writing ‘rubbish’ in the name of God; Pattanaik navigated an hour-long talk like he were swimming through water, never once leaving his spirituality behind. It was remarkable how it seemed to ground him and justify his spirit of storytelling. He possesses the grace of someone who is truly comfortable in his own skin, and at peace with himself.

Cricket as a Barometer of Democracy 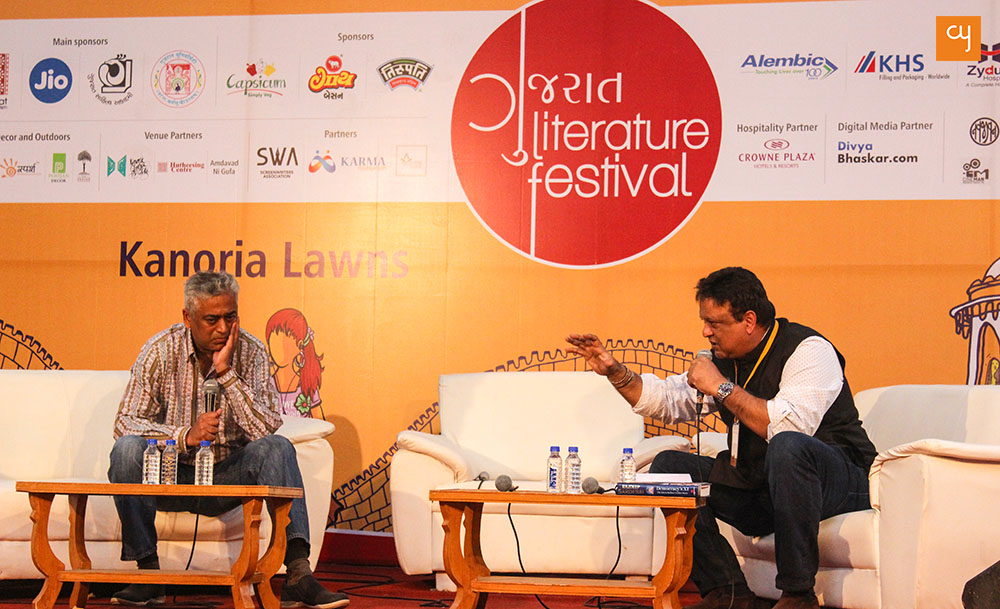 Rajdeep Sardesai, a phenomenal writer and journalist, seemed like he wanted to crawl back into his comfortable childhood during his session; a childhood when cricket had been his whole life. In his latest book Democracy XI, Sardesai has compiled all that cricket has meant for him, along with his observations made as a news reporter. In it, he opines that it is talent and skill that make up the eleven people that represent India in its cricket team; not family, not money and definitely not power. “Desh Badal Raha Hai” being the core topic of discussion in his session, he went on to argue that when an underdog can rise up, from being a person at a ticket counter to a World-Cup-winning-Captain, it marks the essence of a true democracy.

In the session preceding his, journalists Shweta Bajaj and Salil Tripathi talked extensively about the costs incurred in reporting truth; about the murder of journalist-activist Gauri Lankesh and the case against The Wire. It was interesting to see that Sardesai did not want to make a political statement in his session, however, playing it very safe instead. A prolific speaker, anyhow, he made his politics pretty clear. He expressed that we live in times when ‘closed shop politics’ need to open up spaces for people who can actually work; else we risk losing the battle to celebrities who are idolized far more than our political leaders.

At the end of the three-day-fest, what was truly remarkable for me was the underlying theme in almost every panel discussion that I witnessed –a search for truth in storytelling. It seems that asking questions, searching for answers and eventually accepting that someone’s truth might not be the same as yours – but still co-existing with them on the same spectrum – is what seems to have driven literati and artists across the ages. 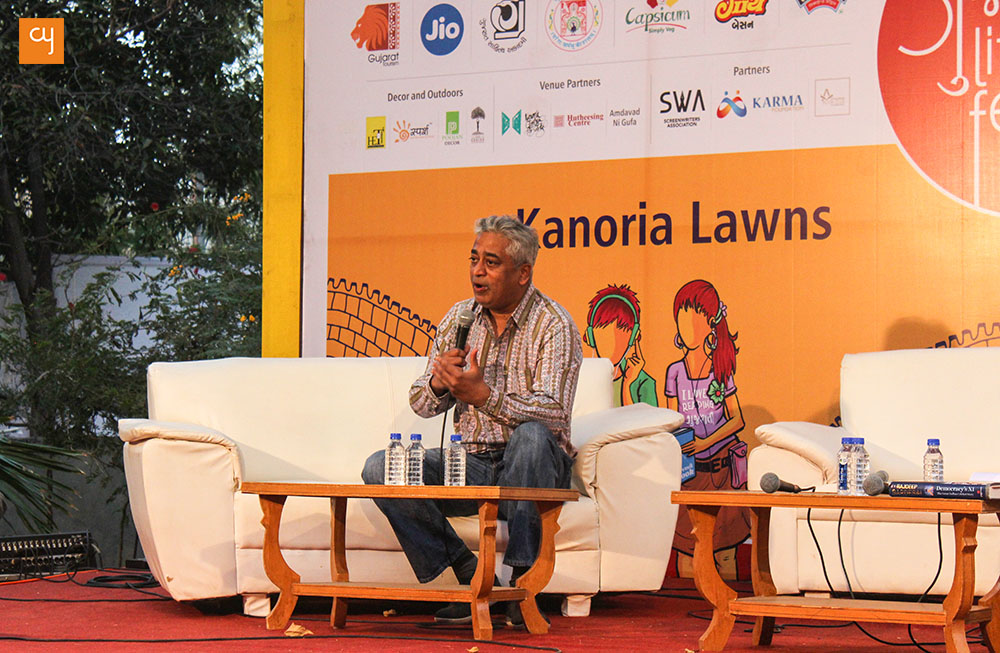 Storytelling has as many faces as any art form, and it played the protagonist in this edition of the Gujarat Literature Festival. No art form was left out and no art form was too big or too small to not be acknowledged. It was heartening to see the city come together to celebrate art and literature, without there being the general elitism that events like these often hold a subtext of. From villagers performing street shows to filmmakers and journalists, if you had a story to tell, this was the place to be. The day was a well-rounded end to a celebration of storytelling!

It gives me immense hope, as an artist and a writer myself, to see such cohesive appreciation of literature and culture. I dearly hope for it to happen over and over again.