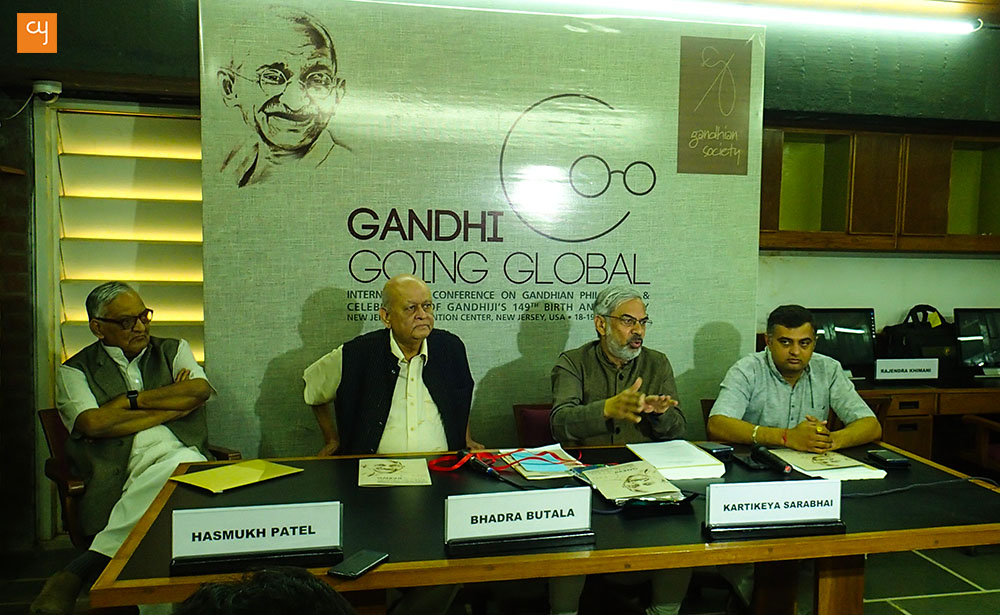 The exponent of peace, harmony and non-violence Mahatma Gandhi, in last seven decades has gone beyond being a historical figure and has evolved into a philosophy that is inclusive and promotes compassionate capitalism. From Gandhian, to Gandhism to Gandhigiri – his lifestyle, principles and humanitarian ideas have influenced the generations till date. ‘Gandhi Going Global’,  is an International Conference on Gandhian Philosophy organised to commemorate the 149th birth anniversary of Mahatma. The conference shall take place at New Jersey Convention Centre, New Jersey, USA on 18-19 August 2018.

The exhibition is being supported by Gandhi Ashram, Gujarat Vidyapith and Navjivan Press of Ahmedabad, National Gandhi Museum of Delhi, Gandhi Research Foundation of Jalgaon and The King Center of Atlanta. In a press conference arranged at the Sabarmati Ashram on January 8, 2018, community builder and trustee of Sabarmati Ashram Kartikeya Sarabhai informed, “Bapu lived the life he spoke about. The whole idea is to take it much beyond the historical aspect of his personality and concentrate on the key concepts like nonviolence, which is the only way to eradicate the contemporary conflicts across the globe.”

The conference was attended by Bhadra Butala founder and president of Gandhian Society, which is founded to promote Gandhian values in the United States. During the event Dhiren Parikh, volunteer with Gandhian Society says, “The 50,000 sqft large exhibition has been divided into six sections. Each chapter is dedicated to his philosophies and is designed in a way that it can be conducted at six different universities in circulation. The Gandhi organisations from India will exhibit Gandhi memorabilia and literature at the exhibition. The two-panel discussions, films, and choreographed events all will be dedicated on Gandhism and Mahatma Gandhi.”

The event will have the dedicated session where Gandhian philosopher Dr Sam Pitroda and Mrs Ila Bhatt of SEWA will be delivering the keynote addresses. The organisers are striving to invite the former First Lady of USA Mrs Michelle Obama to be a part of the summit and have already welcomed more than 200 schools and universities to be a part of the workshop and discussions. During the event, Mr Martin Luther King III, son of Martin Luther King Jr, will be felicitated for his Human Rights activities along with people who have lived the life in a Gandhian way.

The event is part of the many activities planned as run up to the 150th birth anniversary celebration to the Mahatma.