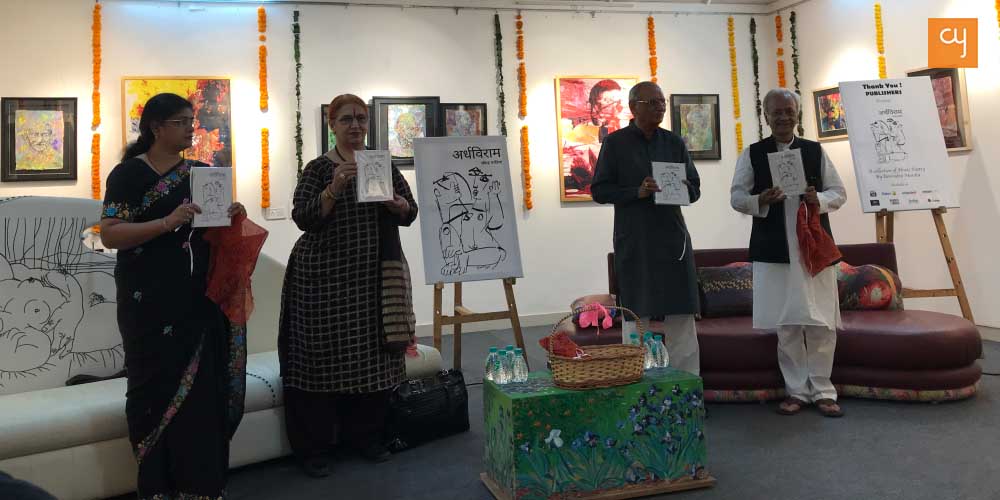 That Ravindra Mardia is a man who wears many hats successfully came across visibly as we sat through this special session of book launch organized on this Wednesday evening at ICAC Art Gallery in Ahmedabad.

Mardia had planned this evening as his birthday bash cum book launch. But Mother Nature threatened – if briefly – this to be an evening on the verge of being marred with the sudden rain sent by Her on what was the last day of the (Gujarati) Bhadrapad month and the Pitru-Paksha, the fortnight that India observes in remembrance of its ancestors with reverence and  nostalgia. However, it was some well deserved good luck on the part of the host writer Mardia as also his guests that the evening and its spread of ceremonies and food was saved since the spell lasted only a few minutes! Things were soon back on track! 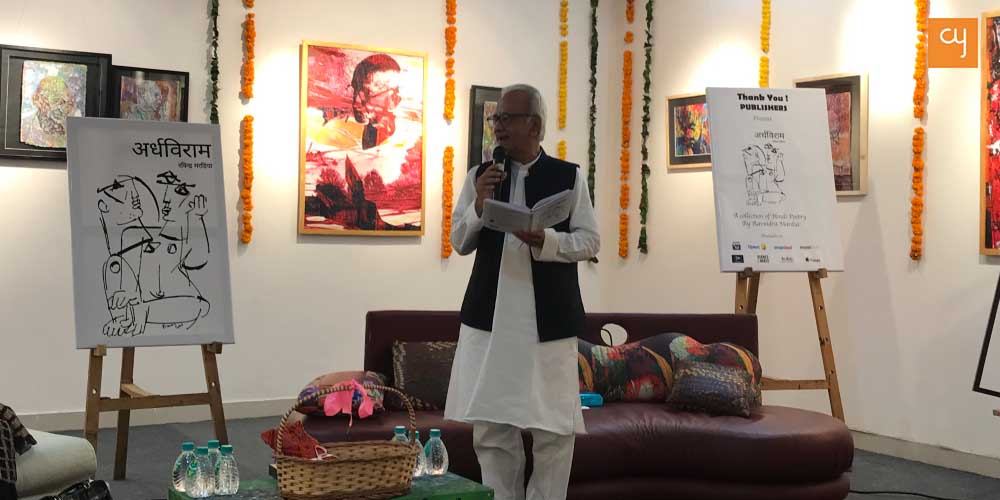 So back in the Gallery hall in the midst of the reflecting glory of Profiles of Gandhi created by ace artist Manhar Kapadia as part of his show started here two days ago, Rima Shah the Master or Miss of Ceremony summoned the gathering for the launch proceedings for this collection of Hindi poetry titled Ardh Viram. This is how and where Mardia was now before his friends and well wishers sporting his latest hat as a poet of some worth! That his versified words had worth at par with the contemporary Hindi poetry’s Metaphor and broad concerns was soon given to the audience by two speakers who have credentials to know and understand the realm of poetry for sure!

While Anjana Sandhir a Professor of Hindi at Gujarat Vidyapith and a teacher of English in the virtual world began tongue in cheek how Mardia approached her for vetting his manuscript of free verse poetry and even some ghazals, she quickly shed the chuckle to acquit Mardia with a clean chit for actually having done a fine job in writing his heart out in free Hindi verse, though she said his ghazals being a part of the genre of the metered verse with dictates of ‘radif’ and ‘kafia’ need some concerted vetting before appearing in book form for the discerning readers! A compliant Mardia is obviously waiting for that part to materialise! 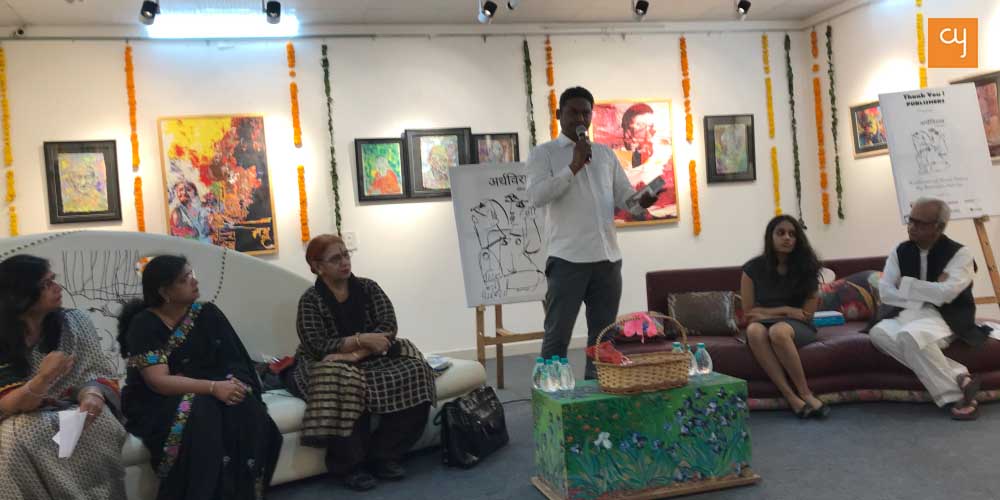 So the audience saw yet another side of the businessman-turned-gallerist-art entrepreneur-art promoter-turned autobiographer. Anjana quoted some of Mardia’s poetry from the just-launched collection to bring out the highlights of poet’s existential experiences, encounters and debacles in his business and social life, more so his dialogue with his love interests but not merely of the romantic kind; his takes on nature, flora and fauna that abound in his milieu at Dehgam and his bond and outreach with and for his family, grand children, workers and arts community.

The other speaker Kumud Verma had herself written a poetic eulogy to summarise and encapsulate Mardia’s poetic expression and content in the collection. She also quoted from his poems to elaborate how he was much at par with contemporary idiom of Hindi poetry. Going a step further, she exhorted the audience to attempt an on-the-spot interpretation of what Mardia recited as part of the programme; actually two of his poems at Kumud’s behest. Kumud has, in fact,  written the foreword of the book too and has sampled her assessment of Mardia’s poetry there.

Mardia on his part also described two of these poems  – one addressed to a parrot and the other to his granddaughter – as his favourite from the collection. Interestingly, his young grand daughter,  named Kavya, is herself a creative poet-in-making, albeit in English. Mardia informed in response to a question that Harivansh Rai Bachchan’s Madhushala has remained his all time favourite ‘khand kavya’ – a long poem!

The collection Ardh Viram has 98 poems in all, most of them having been written in recent years while the process of publication started during the lull of the pandemic times. Even as Mardia had tried his hand at poetry as he did with painting as a young student, the  push of newer inspiration was triggered by a sense of loneliness felt by him in these later years, though nothing is visibly or apparently amiss in his eventful and fuller life, says the poet in his own introduction to the book. 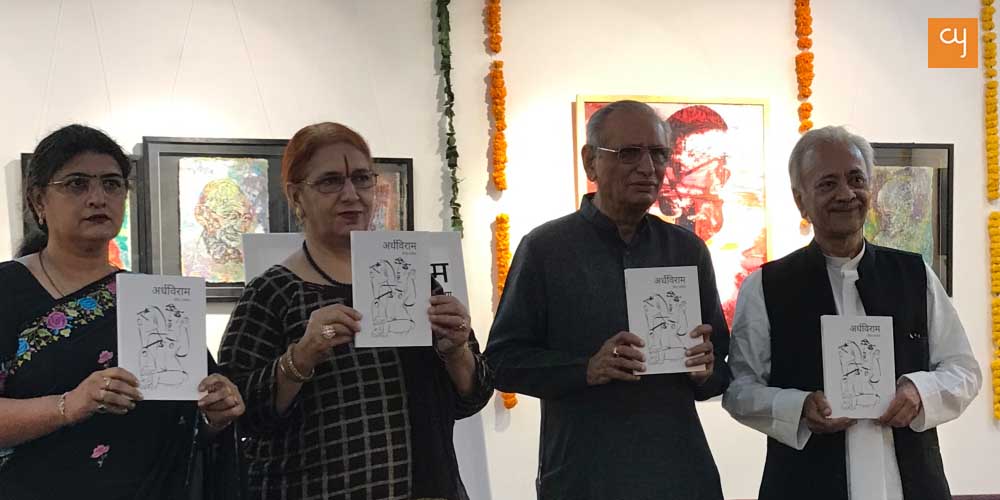 The language of Mardia’s poetry is straight and its content sweeps through a range of human emotions on work in a variety of relationships of all kinds. The book includes a number of short but very positive responses by authors, poets and teachers of Hindi, something difficult to manage by even consistent writers who continuously live in existing networks of their clans. Another good thing about the collection is that it has been created along with fantastic self speaking illustrations sketched in black and white by Mumbai based artist Jitendra Suralkar Pisurwo.

The highlight of the launch evening was that members of the audience were all presented with a rose and a nicely wrapped and signed copy of the Ardh-Viram; meaning Semi colon and also a small break implying thereby that another collection of his poetry by way of his ghazals now under process would soon arrive! This was aesthetics at show for the man who mostly lives within and by the fine art of painting now; and who after successfully running his gallery at Mumbai is now trying to position the ICAC Gallery of Ahmedabad into a space pulsating with life of continuous art activity. Some of the recent workshops, shows and art merchandise stocked for sales here do point in that direction.

Ex MP Surendra Patel who was the guest of honour for the launch also complimented Mardia for having turned around what lay as a costly but mostly an idle asset for the Ahmedabad Municipal Corporation in Western Ahmedabad. 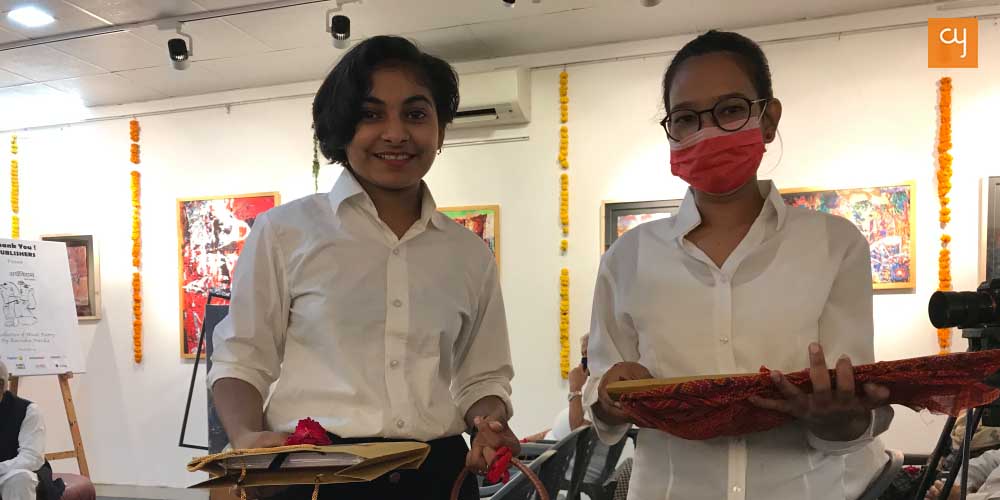 A good collection of hindi poetry straight from the heart of a sincere individual steeped in emotions, this one has been published by Thank You Publishers and deserves the particular attention of people who know Mardia personally or through his autobiography “Buddy for All” or through their associations with him of the artistic kind.

Interestingly, the formal proceedings ended with an announcement by Deepak, a young filmmaker friend of Mardia about his plans afoot to make a biopic based on this autobiography. Now coupled with the under-process ghazal collection, Mardia and his friends give his inner circle two reasons to watch out for their creative space and time! Here is wishing them all the best!