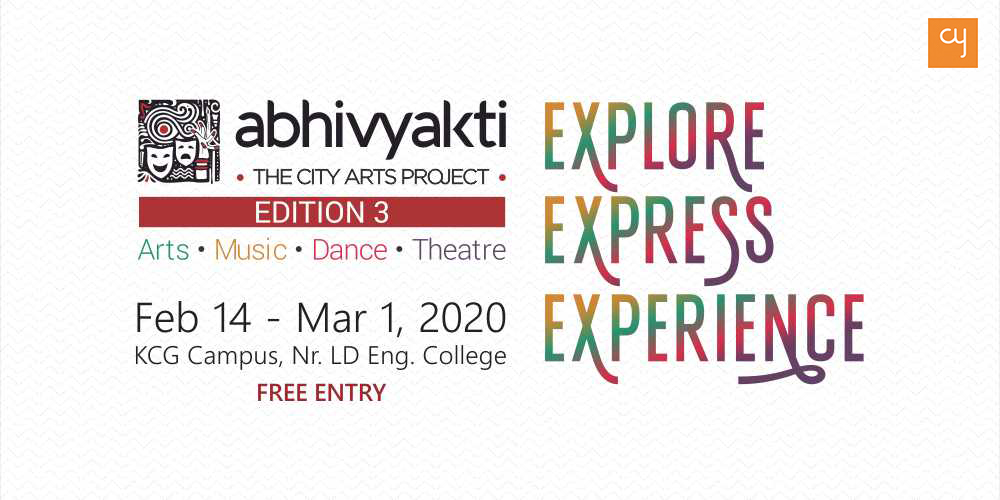 The platform that let’s Ahmedabad discover it’s creative talent -Abhivyakti City Arts Project is set to begin its third edition. With its third edition, Abhivyakti establishes its position as a facilitator for original, fresh and experimental ideas of arts and performances.

Abhivyakti is back, yatris! An initiative of UNM Foundation, Abhivyakti Edition 3 will take place from February 14th till March 1st at KCG Campus, besides LD Engineering College.

Started in 2018, Abhivyakti is a platform that celebrates creativity in its purest form and puts it on a pedestal where it can earn its due appreciation. Its benign ideology works in three folds: to fuel the ideas which are extraordinary and strive towards making them palpable, to abolish the unnecessary elitism associated with art and, finally, to bridge the gap between artists and their audience.

The curatorial process is stringent and lengthy, to say the least. Abhivyakti invites applications through an open call, resulting into a plethora of submissions. For this season they received over 400 applications spread across the four segments of Visual Arts, Music, Theatre and Dance. Each segment has a designated curator, who then takes up the task of understanding each proposal and making a selection. The selected participants are invited to make a presentation in front of a jury, which results into a final shortlisting of artists. These shortlisted artists are then invited for a Mentor round. Veteran artists support the initiative as mentors and they look at each participant and provide him/her with valuable inputs. After all of this a final list of artists is selected who than start working on their original works.

The Curators for Edition 3 of Abhivyakti

The four artists bestowed with this task of curating edition 3 of Abhivyakti are –  for the theatre segment,  Ankit Gor, a prolific writer, director and actor who has given us plays like Pythagoras, Semicolon and I Want to Tweet. This is Ankit’s second consecutive stint as a curator. For the dance segment Sonal Bhargav is the chosen curator. Sonal is a  Bharatanatyam exponent who is known for adding creative narratives to her performance. The music segment is curated by Akash Bhatt, like Ankit his is also second consecutive stint as curator. An architect and a musician, Akash’s has exposure to multiple disciplines, genres and cultures, which gives him the ability to experiment with diversity.  And the visual arts segment is curated by, Vyom Mehta, an intuitive sculptor who has the ability to visualise life even in inanimate. 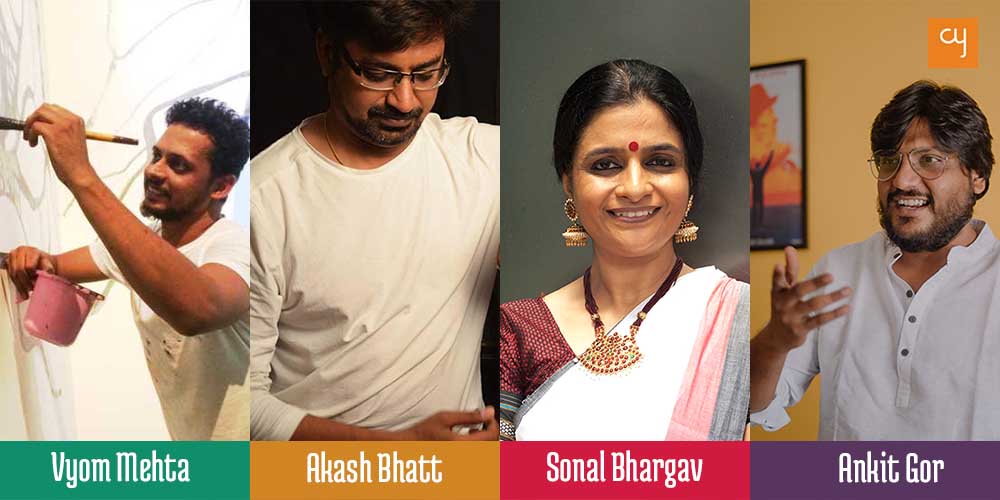 The Mentors for Edition 3 of Abhivyakti

While the extremely talented curators are accomplished to identify the brightest gems in the lot, it requires immense experience and wisdom to polish them into something extraordinary.

For that, Abhivyakti invited some veterans and pioneers of the industry to guide the selected artists and to give their ideas finesse. Mentoring the theatre segment is Sunil Shanbag; a Mumbai based theatre director and producer who is revered for presenting the complex nature of contemporary India in his plays. Mentoring the dance segment is Daksha Sheth, one of India’s most exciting and progressive dance artists. The music segment sought careful counsel from Rajat Dholakia, who has composed music for iconic movies like Firaaq (2008), Mirch Masala (1987) and Holi (1985). And supervising the Visual art installations is Sharmila Sagara, a renowned artist and an art critic. 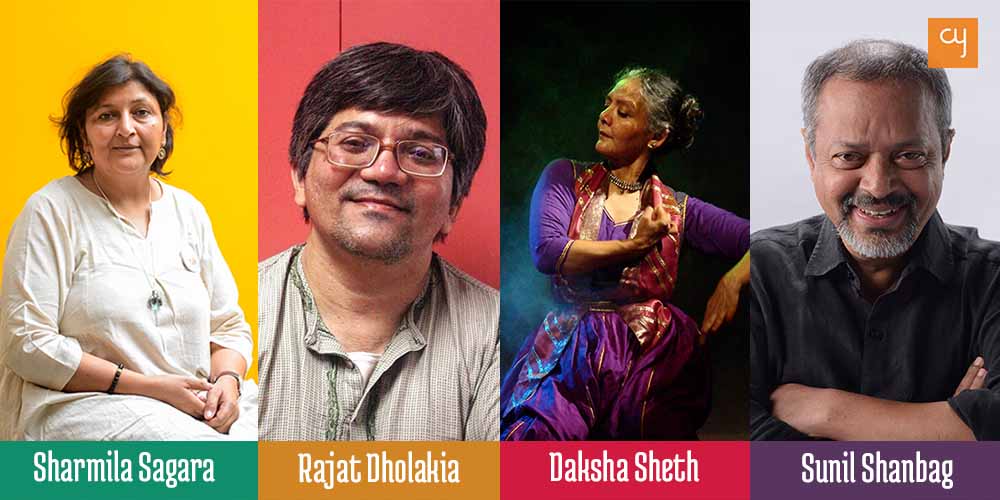 All that’s left now was for the artists to start giving life to their ideas. For four months, they have been relentlessly working on their projects. From gathering performers to sketching out the blueprints for their installation, the curators have walked alongside them, providing their expertise to help the artists tackle problems at every junction.

A Glimpse into what awaits…

What came out of these laborsome months are some of the most extraordinary installations and performances this city has ever seen before. And this year, Abhivyakti has truly up-ed their game.

While the previous editions had about 10 to 12 artworks put up for display, this time, Abhivyakti brings you 43 astounding installations! Furthermore, each one is unique and thought to provoke in its own manner.

Gigantic sculptures, self-propelling kinetic sculptures, mesmerising paintings, absurd artworks, as well as artists creating their piece in front of the audience, you can experience it all. Vyom has masterfully juxtaposed these installations throughout the facility of KCG.

If you thought that’s all the spectacle there is, the performances are going to be mind-blowing as well. Each performance lined-up in all the three segments will take you on an imaginative rollercoaster, taking you through the ups and downs of life. While few capture the euphoric essence of existence, some will give you a reality check of the hardships people struggle with.

From here begins the artist’s journey of giving life to their ideas. For four months, they have been relentlessly working on their projects. From gathering performers to sketching out the blueprints for their installation, the curators have walked alongside them, providing their expertise to help the artists tackle problems at every junction.

So what’s in store at Edition 3

After talking with curators and getting a peep in some of the preparatory work, we can say that Edition 3 is not just living upto the Abhivyakti standards of boldness and originality, it has taken quite a few steps ahead. The striking factor is the incremental offerings in the Visual Art segment. There will be more than 40 art installations, most of which will be by first time presenters, that will fill up the entire arena of the chosen venue. These works are a mix of installation art,  self-propelling kinetic sculptures, paintings, performance arts, video installations and much more. All of these are created keeping in mind the spatial dynamics of KCG Campus. Collectively this will create a beautiful experience for the visitor.

If you thought that’s all the spectacle there is, the performances are going to be equally compelling as well. While few capture the euphoric essence of existence, some will give you a reality check of the hardships people struggle with.

There is so much of talent out there in the city. We at #Abhivyakti are glad to be a catalyst in letting the city experience home grown art and talent. #Music segment at Abhivyakti Edition 3 is inspiring, captivating and enriching. Have a look at the behind-the-scenes moments. We shall soon be introducing all the artists to you. Stay Tuned… #AbhivyaktiE3 #Abhivyakti2020 #Musician #Ahmedabad #MaruAmdavad #Amdavad #ApnuAmdavad #hiphop #rap #dj #singer #art #musicians #musica #artist #rock #livemusic #guitar #concert #song @munafluhar @aalapkikani @meeracledee @arif_mir_official @tath.aagat @_avanti_4 #RaghavDave @harmish.joshi @_kabira_26

#Abhivyakti has always encouraged originality and experimentation in arts; and Theatre segment at Abhivyakti Edition 3 is exactly that, and more. Theatre segment is brimming with compelling ideas that aspire to engage the viewer and give them food for thought to take home. Catch the glimpses from the ongoing preparations. We shall soon be introducing all the artists to you. Stay tuned to #AbhivyaktiE3 for more updates. Festival dates: February 14 – March 1, 2020 Festival Venue: KCG Campus, Nr. LD Engineering College #Abhivyakti2020 #Ahmedabad #Theatre #Artists @gaurang_anand @harshshodhan59 @rupanshisince1990 @gauribakshi1 @chetandaiya @queerlytherealanahita #performanceart #Play #drama #artist #theater

We are so excited to present to you the third edition of #Abhivyakti … Abhivyakti's curatorial philosophy is to encourage fresh and exciting ideas and showcase them to the art loving community of #Ahmedabad. A lot is happening at our end…here's a tiny glimpse of the energy that is created by our #dance segment performers. Stay tuned to #AbhivyaktiE3 for more updates. Festival dates: February 14 – March 1, 2020 Festival Venue: KCG Campus, Nr. LD Engineering College #Abhivyakti2020 #india #dancing #dancer #indianclassicaldancers #dancers #Ahmedabad #MaruAmdavad #ApnuAmdavad @kadam.parikh @ravalkathanki @manasikarani @jaimiljoshi @jigna_dixit @nrityasonal @surani1023

The Collaterals – to imbibe a continuity
With this edition, Abhivyakti has introduces a fresh series of events under the umbrella of ‘Abhivyakti Collaterals’. The idea is to lend continuity to the artistic interactions as well as blend more discussions, workshops, talks, lectures into its fold.

The festival that begins on February 14 will continue till March 1. Each evening will have multiple performances across the three genres. The visual art display is open for viewing all days between 5 – 9 pm. Festival will remain closed on Mondays. Entry is free and open for all, this is one event everyone in and around Ahmedabad should visit. 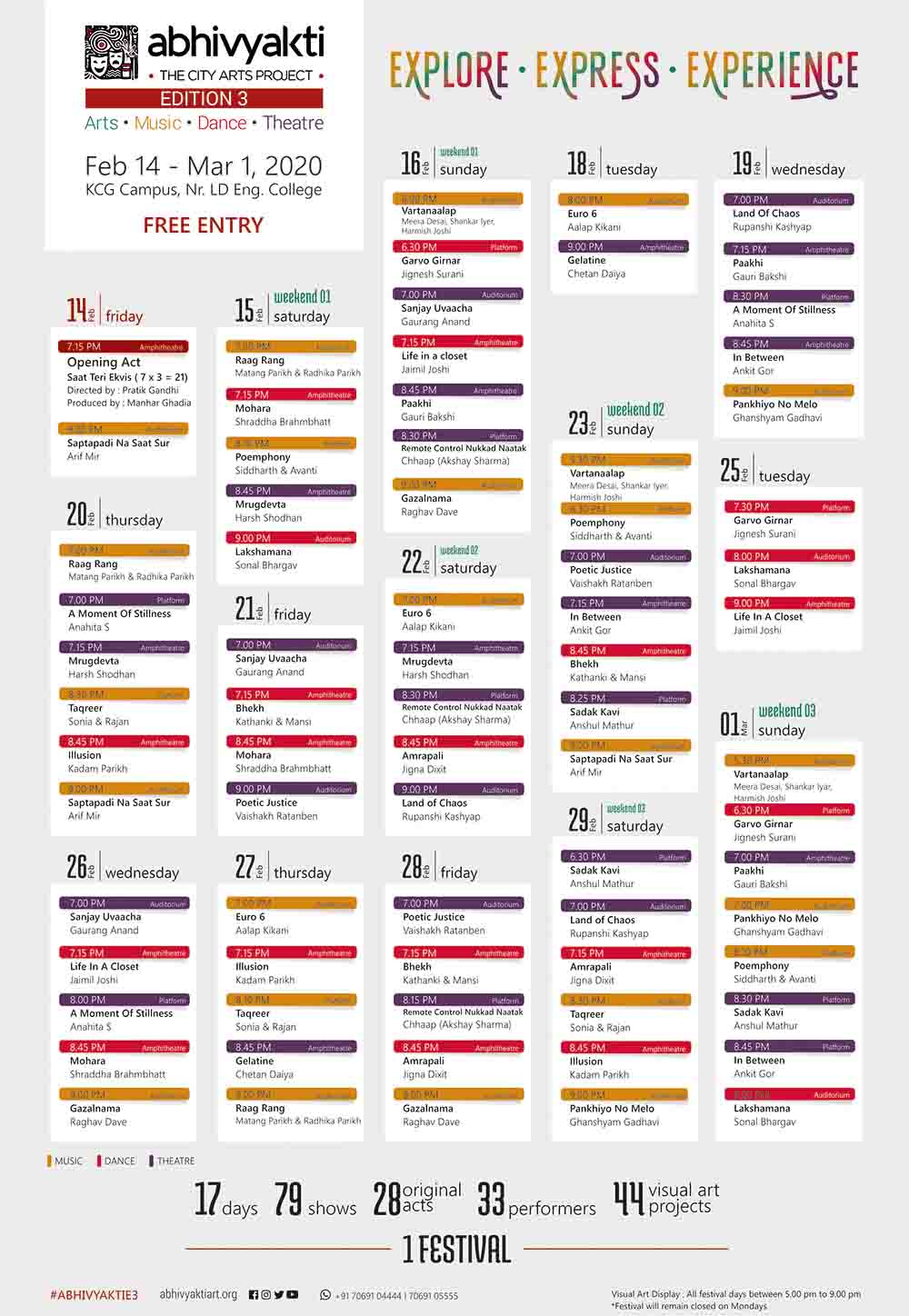