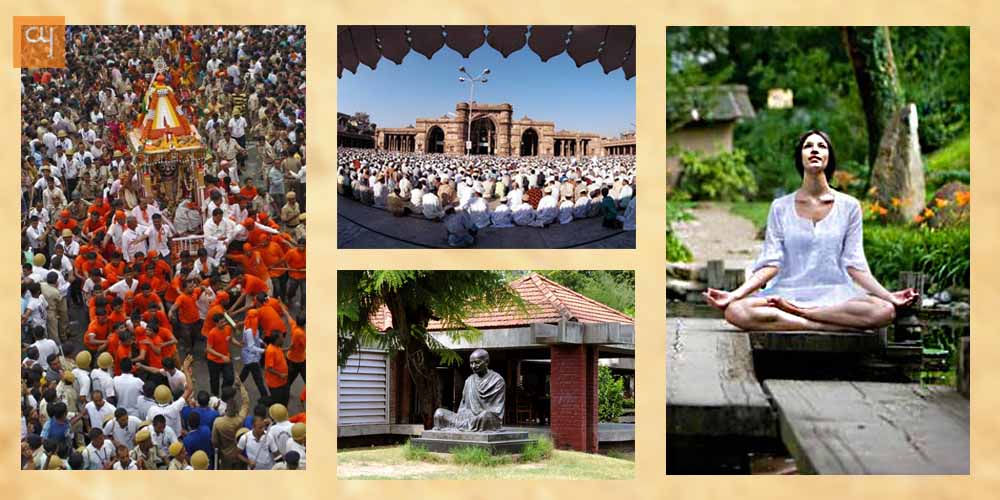 Ahmedabad since eons has been a melting pot for diverse cultures to merge and become one, at the same time the soil of the city has always encouraged experiments. This June the characteristic of the city is coming alive in the form of festivities – diverse events happening concurrently, each one signifying the personality of the city. On one hand is country’s second largest and among the most unique religious procession, known as RATH YATRA, the 140th edition scheduled on 25th of June and on the other hand is the biggest religious celebration of Islam, The Eid-ul-Fitr (Ramadan) scheduled to be celebrated by citizens on June 26(or 27).

Apart from two religious events whats on cards is the celebration of International Day of Yoga for which Ahmedabad is working to create a world record for most number of yoga doers under a single event. Same shall happen from 18th to 21st of June, 2017 at GMDC grounds in Ahmedabad. Swami Ramdev’s Yoga organisation Patanjali will help people learn Yoga during this massive celebration.

Ahmedabad is blessed to be home for institutes set up by Gandhiji, prime among them is the Sabarmati Ashram which became the fulcrum of India’s Freedom Movement. On June 30, 2017  Sabarmati Ashram is set to mark its centenary celebration, which Prime Minister Narendra Modi is expected to attend. Recently in April 2017 in the UK, to celebrate the Ashram’s 100th anniversary year a documentary was projected on the making of Gandhi Ashram, which immediately sparked a controversy because of its narrative plot.

The state and city administration is on foot to see that all the festivities happen smoothly and citizens can freely engage with each of these unique celebrations. Lot of care is being taken by Ahmedabad Municipal Corporation to fight the threat of mosquito breeding, which shoots up during the humid conditions. The member of civic bodies and district collectorates have already begun their drill for the D-Day since June 14.