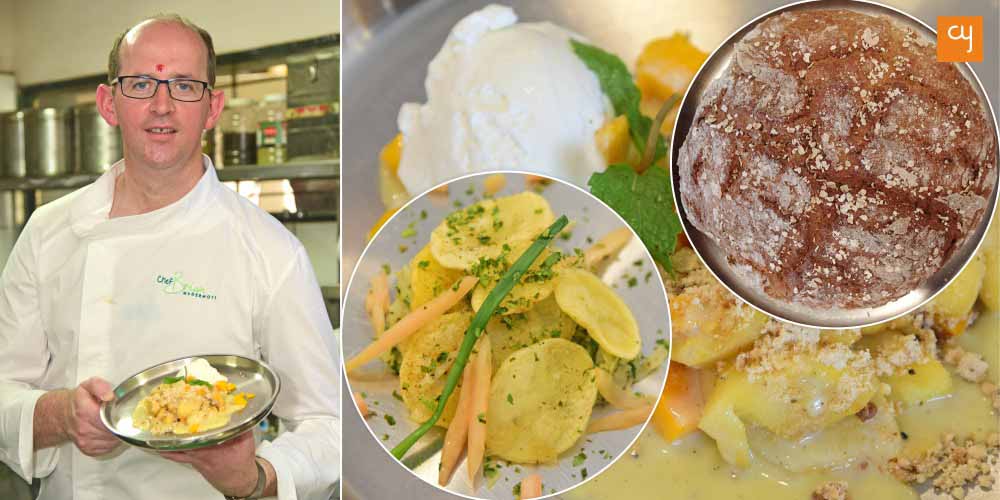 Salt a staple taste globally found in every cuisine and predominantly in every dish can now be altered with its substitute tastes. Yes, you read it right we are talking about a gastronomy culture where the salt is completely absent? A professional chef from Northern Western Regional College of Ireland, UK (NWRC) – Brian McDermott is visiting India as part of efforts by Teamlease Skills University of Vadodara, India. The objective is to promote no sodium cooking technique for healthy eating habits. On May 10, 2017, he visited Ahmedabad to deliver a No Salt cookery workshop at Gopi Dining Hall, and there we interacted with celebrity chef McDermott, who also happens to be the general manager of Foodovation Food Development Centre and operates cooking shows on BBC radio and television back in Ireland.

His renowned culinary art experimentations were further explored with a question on how he plans to promote these techniques on Indian, especially Gujarati cuisine, where Khara (Salty) happens to be a special ingredient, to which he responded, “The Irish cooking practices, farming techniques, dairy products and spices are identical to those of India so inculcating the No Salt technique is comparatively easier for me than in any other cuisine. And the salty can always be altered with supplementary tastes of spicy, sweet, bitter and sour. I was inspired to abort salt when my doctor advised reducing sodium content in my food after my second heart attack. I love Indian culinary practices of cooking fresh materials instead of highly saline and preservative full canned food. I look forward to deeply know this region’s culture, people, academies and values.”

The workshop was organized at Gopi Dining Hall in Prahladnagar area of Ahmedabad, and it was attended by nearly 20 executive chefs belonging to various organisations. McDermott gave live demonstration to these chefs during which he prepared a variety of salt-free dishes. His preparations include Green beans, Pea & Mint Soup, Brown Bread and Braised Cabbage – these were well received by the participants.

On the occasion we interacted with the restaurant’s owner Dilip Thakkar on how he plans to inculcate these healthy habits at his popular food chain,”Salt is invariably necessary to run a restaurant, since people highly look forward at a Gujarati food joint for a vast variety and lip-smacking taste, but I definitely plan to adopt this method in my Hospital catering section, where patients need to be delivered with healthy food for rapid recovery.”

Many medical practitioners and researchers are propogating reduction of Salt in daily diet. A no-sodium cooking technique is a welcome initiative. Having said that the fact remains that salt is an indispensable ingredient of the staple, so much so, that it has inspired mass revolutions like Mahatma’s Dandi March.

Time will tell, how big a difference, alternate methods of cooking, promoted by food experts like McDermott, will create in the layman’s food choice.