Have a creative mind and wish to become an ad guru someday? Why wait? Submit an advertisement entry before April 30 at the ‘AD 2 ACT’ online competition, motivate people to vote in election 2019 and win big right away!

The Election Commission of India has already declared the set application of the Moral code of conduct, and all the phases of the general Lok Sabha elections 2019 will be conducted from April 11 to May 19, 2019. The vote counting will commence on May 23 and on the same day its results will be declared. During this election period, there has been a constant drive going on across the nation to help citizens realise their single vote’s power; and to add on a creative twist to the drive, The Brand Klub Ahmedabad has decided to come up with ‘AD 2 ACT’ Online Vote Ad Contest. The club is formed by like-minded individuals from advertising and marketing communication field in Ahmedabad. Through this initiative, they wish to motivate creative fraternity of India to make print advertisements, that creates awareness about ‘Voting’ among the citizens and create engagement around the General elections 2019.

The larger objective of the competition is to promote positive and qualitative advertising communication and hence it has no entry fees, not it has any restrictions on number of entries that each participant can submit, all that is expected is that all submissions should be ‘original’ creations. The creative minds of the nation can openly submit their inventive entries, by simply joining the Facebook group of Brand Klub Ahmedabad. The submitted advertisements will be evaluated by an eminent set of jury members and the winners will be declared by April 30, 2019. Best three entries will receive rewards as well as a certificate for participation; every participant shall also get a certificate of participation.

The founding member of Brand Klub Ahmedabad, Sanjay Chakraborty, shares, “The mission of the club is to create forums and events to help its members improve their professional competencies thereby raising the standards of advertising in the state. Gujarat has given to nation great brands and hence we feel it needs an organized platform that encourages advertising and marketing communication area to constantly update and enrich the fraternity in Gujarat towards the betterment of communication at large.”

Success of democracy can be measured by the participation of its citizens, and such initiatives let citizens express their concerns in a creative way. 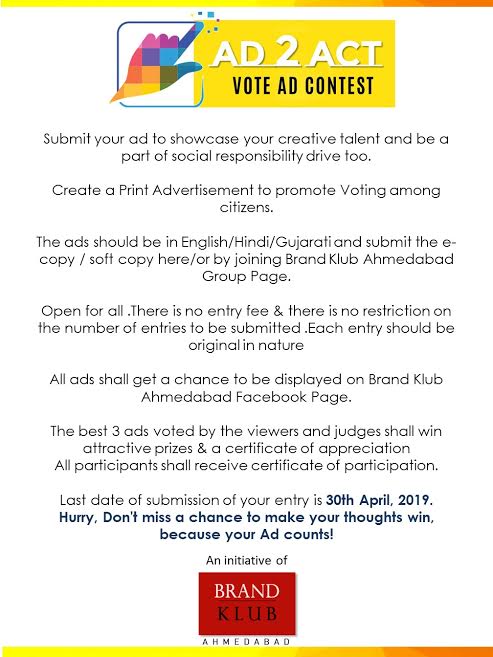