The co-creator of  Asterix – one of the best-loved characters in French popular culture, Albert Uderzo passed away in  Neuilly, France at the age of 92. Learn about his life and the creation of an iconic comic.

Asterix is among the most loved and read comic book character ever created. Asterix as imagined by its creator duo Albert Uderzo is a warrior from an ancient town of Gaul, where he and his best friend Obelix together challenge the Roman occupation of their town. As a child Obelix fell into magic potion which made him invincibly strong, and this virute often came to the help of Asterix. The creators generated various adventures of these characters, and it has sold over 380 million copies in 11 different language world over.  Albert Uderzo, the illustrator and co-creator of the iconic comic series, passed away at the age of 92. He died at his home while in sleep in the suburb of Neuilly-sur-Seine near Paris due to a heart attack on Tuesday, March 24, 2020.

Born in April 25th, 1927 as Alberto Aleandro Uderzo, Albert was colour-blind from birth. But from an early age, he found his calling in arts and, undoubtedly, became one of the world’s most acclaimed cartoonists. And accompanied with René Goscinny, he gave us an enthralling comic series which most of us would’ve read growing up.

Set in 50 B.C. during Julius Caesar’s Gallic wars, Asterix is a story of a brave Gaul warrior, with an unwavering sense of duty, who saves the town from Roman occupation with some or the other magical potion. With his winged helmet and a horseshoe moustache, Asterix is always accompanied by his bulbous and loyal friend Obelix, who is the strongest man in the world, and his dog, Dogmatix (called ‘Idefix’ in French versions) who travelled to exotic destinations like Britain, Belgium and Egypt.

Uderzo and Goscinny came up with the idea of this series one day, in 1959, while enjoying an aperitif time of a balcony. They wanted a story, significant to the French culture, which can give them a superhero that can stand out. And bam! They came up with Asterix. The comic is a masterful blend of patriotism and humour which not only entertained children, it taught French kids about their legacy and different cultures from all around the world. 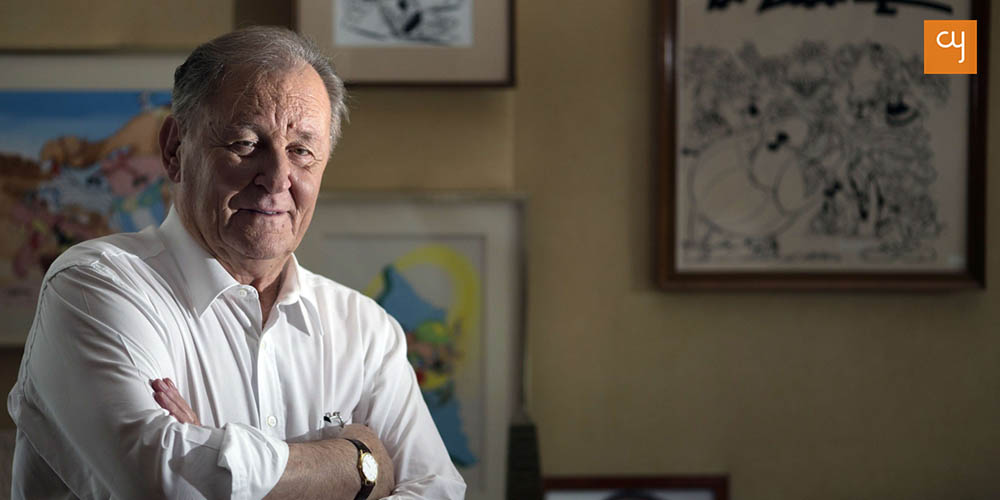 And its popularity was a monumental feat in itself. Beating their predecessors, like Voltaire, Hugo and Flaubert, Asterix observed sales of more than 380 million copies worldwide, translation in more than 100 languages and has been filmed 14 times! And as if that’s not enough proof of France’s love for the series, they named their first satellite ‘Asterix’.

In a conversation with Times, Uderzo said:

“It’s a puzzle to me why Asterix happened the way it did. René and I had previously created other characters with as much passion and enthusiasm, but only Asterix was a hit. I think it’s perhaps because everyone recognizes himself in the characters. The idea of the weak who defeat the strong appeals. After all, we all have someone stronger lording it over us: the government, the police, the tax collector”.

The duo created around 2 dozen volumes until the death of Goscinny in 1977. Uderzo wanted to shut off further creation but he decided to keep the series alive single handed until 2013 when he gave the reins of Asterix to writer Jean-Yves Ferri and illustrator Didier Conrad, beginning with the edition ‘Asterix and the Picts’.

While Uderzo wanted to leave behind his legacy onto the succeeding generation, all didn’t go as smoothly as planned. By the time he bestowed the responsibility onto the new creative duo, Uderzo had already sold a majority of his stakes of his publishing company, Editions Albert- René, to a French conglomerate, Hachette Livre. But Uderzo’s daughter, Sylvie Uderzo, a former executive of the company, was not in agreement to this. She allegedly said to Le Monde that Albert had handed over his comics to “perhaps the worst enemies of Asterix, the men of finance and industry”.

The daughter – father legal battle ended after 7 years, when the family publicly reunited in 2014.

Personally, Asterix played a major role as I grew. I used to find solace in its creative and exploratory universe; sailing through the seas and unfolding new secrets of the world that we live in. And, I forever will be grateful to its creators who gave generations something to dream about.