The first image that comes to mind when one thinks about Gujarat, is of multi-coloured costumes at Navratri time, with vivid prints that embody the spirit of the state. Gujarat boasts of its arts and crafts. These are skills which seem to come so naturally to the Gujarati. If one looks up the crafts of this state, the list is not small by any means! One wonders that craft may even form the core identity of Gujarat.

Yet here we are, at a time and age where there is a stark divide between the craftsman and us. It is as if the crafts are now an exclusive domain, with only a handful of people who know how to make them. While this has always been the case, to some degree, the ever-dwindling number of people today who are masters of these crafts, is a grave concern.

So at the end of this month, Kanoria Centre for Arts and Creative Yatra are bringing to you a series of hands-on workshops, which offer a chance to learn from the masters themselves. 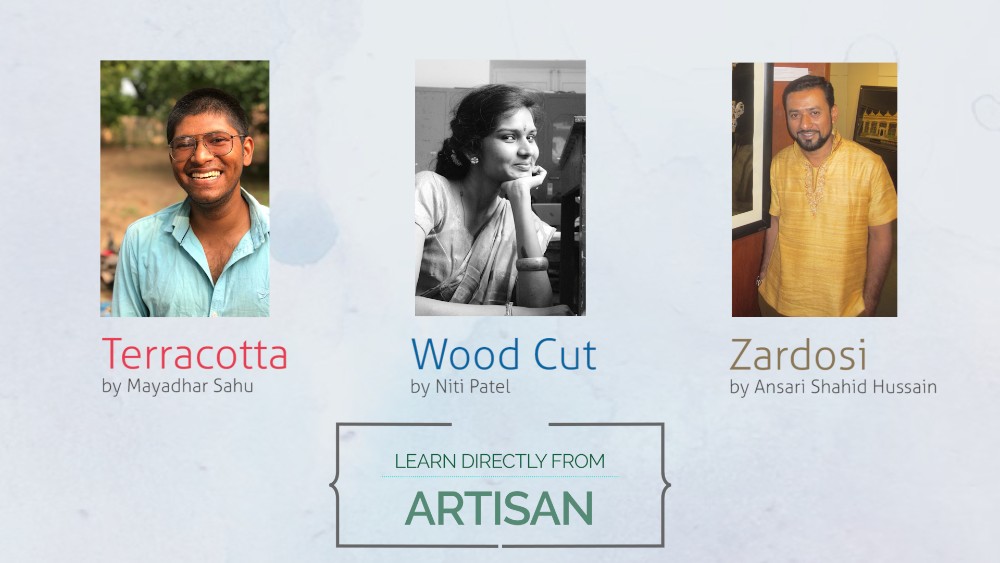 One of these is a workshop on Terracotta Work, which will be conducted by award-winning artist Mayadhar Sahu. Known as the first creative expression in the civilised world, terracotta craft dates back all the way to the Greek civilisation. Its manifestations range from the humble earthen pot to giant-sized sculptures. In India, terracotta artwork has always been an integral part of our homes. The terracotta workshop is being held from 22nd to 25th February, between 3 to 5 pm at the Kanoria Centre for Arts.

Another truly interesting workshop is on Woodcut Printmaking. Dating all the way back to 17th century China, this is one of the oldest techniques in the art of printing and reproducing. In this technique, a design or drawing is made on a piece of wood and its untouched areas are then cut away, leaving a raised version of the image. This is then inked. Participants will not only learn how to carve their own art into wood blocks, but will also learn how to make their own prints by the end of the workshop. This workshop is being held from 22nd to 25th  February, between 3 to 5pm. It will be facilitated by artist Niti Patel who has previously exhibited her works at the Amdavad ni Gufa Gallery and Hutheesing Visual Art Centre.

Zardosi is another craft which forms an integral part of our heritage. One of the oldest embroidery techniques in the country, it has been in existence since the time of the Rig Veda. Once used to embellish royal wardrobes, ‘Zar’ means ‘gold’ and ‘Dosi’ means ‘work’, in Persian. Using tools such as gold and silver threads, Zardosi embroidery work involves making elaborate motifs. These almost look three-dimensional, and with studded pearls and precious stones, the magnificence of the work is often further heightened. Learn this ancient craft with artist Ansari Shahid Hussain, who is best known for creating artworks depicting heritage monuments using the Zardosi craft. He is part of the EU-sponsored Ahmedabad Heritage Venture Lab (AHVL) project. This workshop is being held from 24th to 25th February, between 3 to 5 pm.

Anyone who’s ever made something will be familiar with that feeling of pride, that sense of affection towards the thing that they’ve created with their own two hands. Why do we get such a visceral satisfaction from creating something – be it a garden, a pillowcase, a line of code, or something as purely aesthetic as a drawing or a piece of jewelry? It seems that, in much the same way that our bodies are wired to enjoy pro-creating, our brains are also designed to enjoy creating new things.

Not only is making stuff inherently enjoyable, it can also be contagious. This may be why so many makers and artisans are creating opportunities for others to learn their crafts. From zardosi to wood printmaking to terracotta art, there’s never been a better time for Amdavadis to explore their curiosity and experience the elation of creating something new.

Come join us at the Kanoria Centre for Arts at the end of this month of February. Learn from the artisans themselves and gain a truly hands-on experience of the crafts in our country.

Each of the three workshops costs Rs. 1,800/-  per participant (materials included). They are all being held at the Kanoria Centre of Arts in collaboration with Creative Yatra.