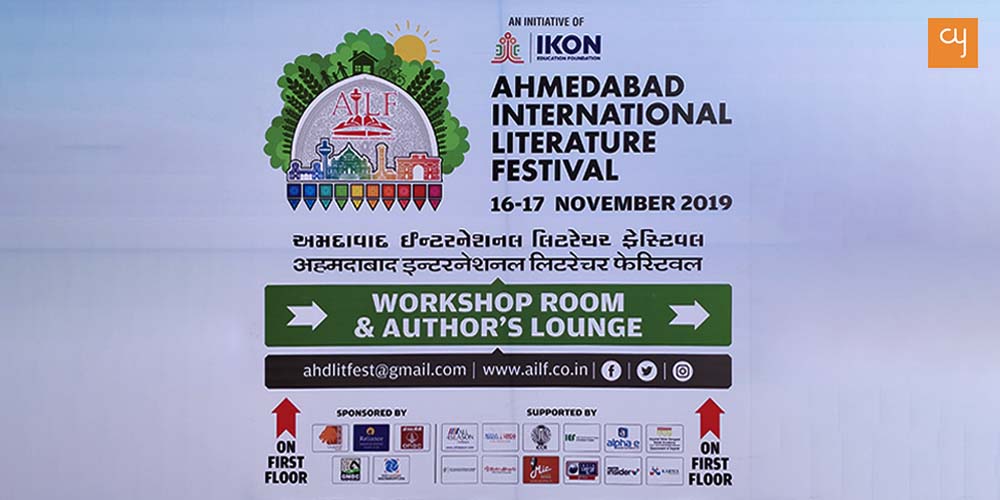 Ahmedabad witnessed the 4th edition of the Ahmedabad International Literature Festival on November 16th and 17th, where many writers and creatives opened relevant discussions and conducted workshops that helped open new ideas and debates in literature and how it impacts society.

IKON Education Foundation organised its 4th edition of the Ahmedabad International Literature Festival (AILF) on November 16th and 17th. The festival aimed at bringing writers, poets, journalists, diplomats and literature aficionados from all around the world to Ahmedabad. AILF provided a platform for them to discuss, debate and deconstruct the societal notions and stigmas in order to help the audience understand these concepts better.

Ahmedabad International Literature Festival (AILF) is an initiative that seeks to promote writing & reading, particularly among children and young adults with a focus on storytelling, poetry, entrepreneurship and self-development. They hold panel discussions with reputed literary figures from all around the world as well as conduct workshops and contests that help emerging writers and poets to grow. Moreover, they make attempts to move beyond literature, by promoting arts and craft for the holistic development of young minds. Umashankar Yadav, Festival Director asserted his commitment towards growth of literature among the citizens of Ahmedabad through his continued efforts.

The festival hosted 18 sessions that threw light on various important aspects of the literary realm. For instance, one of the sessions was on “Societal Moksha”, while another panel discussed the dark world of female criminals.

Queens of Crime, a panel discussion between Mallika Sarabhai, the well-known Indian classical dancer and an activist, and Sushant Singh, actor and author, talked about the creation of the book Queens of Crime, written by Kuldeep Yadav and Sushant Singh, and exposed the stories of female criminals whose acts are unheard of by the mass. While we are familiar with some stories of male criminals, we rarely get to understand the perspective of the female criminals, the kind of crimes they commit, and what leads them to commit them. Sharing haunting incidents recorded in the book, they spoke about how the violence by the female criminals while committing such crimes varied from that of male criminals.

Another discussion, under the title How the story is told matters, analysed the responsibility of content creators in the era of new information and social media, in delivering the stories and the way they are told. The panel consisted of Dinesh Gautam, Sr. Executive Editor and Sr. Anchor at TV9, Kingshuk Nag, leading journalist and Chairman of Wordsworth Printing & Publishing, and Vasanthi Hariprakash, Founder-Editor of Pickle Jar. The panel was moderated by Mihir Gajrawala, co-founder of creativeyatra.com.

Furthermore, a discussion on the changing disciplines of Cultural Diplomacy in the Digital Era took place as well, concentrating on the use of soft power by different nations and the role of social media in doing so. The panel had dignitaries from various countries, including Alison Reilly, Deputy Consul General of Ireland, Sarah Ziebell, Regional Public Engagement Specialist at U.S. Embassy New Delhi, Frederick Lavoie, author and journalist from Canada and Gael de Kerguenec, a French poet, painter and the Director of Alliance Francaise in Ahmedabad.

Apart from panel discussions and workshops, the festival hosted various plays and musical events as well. Alliance Francaise d’Ahmedabad performed a beautiful play by the famous French writer Moliere titled Le Bourgeois Gentillhomme (or The Bourgeois Gentleman) while the Roohani Sisters (Jagriti Luthra Prasanna and Neeta Pandey Negi) enchanted the crowd with their beautiful performance of Sufi Ghazals and Qawwalis.