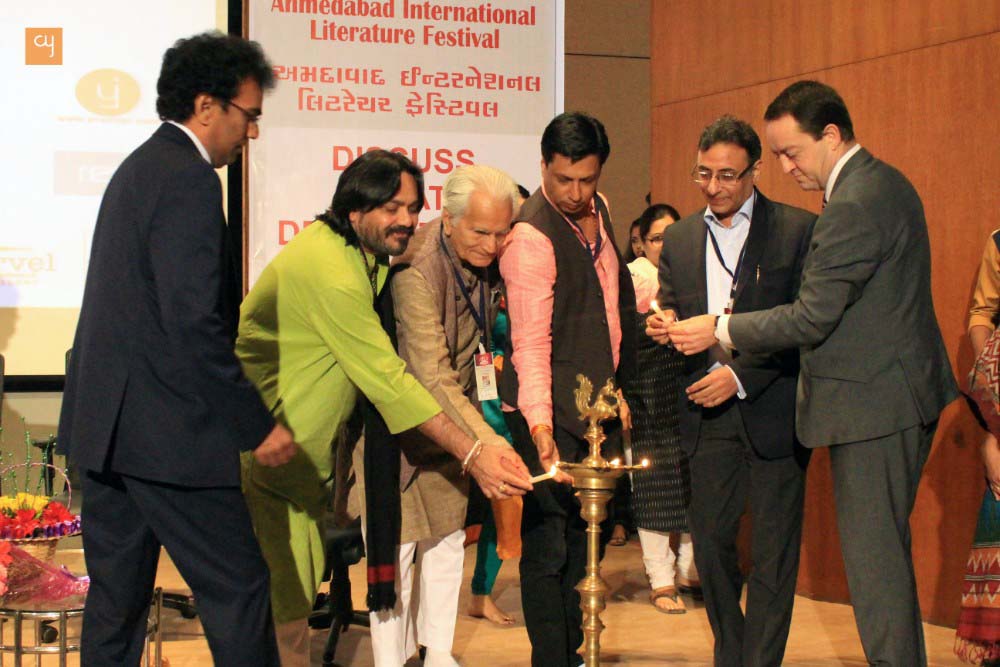 In the weekend of 12th and 13th November, Ahmedabad played host to the maiden Ahmedabad International Literature Festival. The LitFest seeks to promote writing & reading, particularly among children & young adults, with a focus on storytelling, poetry, entrepreneurship, and self-development.

The events’ byline is Discuss, Debate, Deconstruct. The venue for the event was Ahmedabad Management Association (AMA). Over the course of two days, the fest explores varied themes like the relevance of mythology, world literature, Gujarati literature, Poetry, Short Stories, Literary Commerce, entrepreneurship and much more.

Along with lectures and discussions, the fest also played host to enriching workshops; some were quite interesting like “the art of letter writing” and another one that was titled “how to add 50000 productive hours to your life” among many others.

The festival was inaugurated on the 12th of November at J.B. Auditorium at AMA. The Guests of Honours for the event were Madhur Bhandarkar, Geoff Wain, Raghuveer Chaudhari and Yogesh Gadhvi. The keynote speech was given by Sumant Batra. Mr Batra, in his keynote focussed upon the power and significance of art and literature in adding to the soft power of any nation.

The Festival got off to a super start, with an enthusiastic full house eager to listen to the conversation between National Award winning director Madhur Bhandarkar and popular Ahmedabad RJ, Dhvanit. The theme of the session was “Captivating Storylines: How much does a good story matter?” 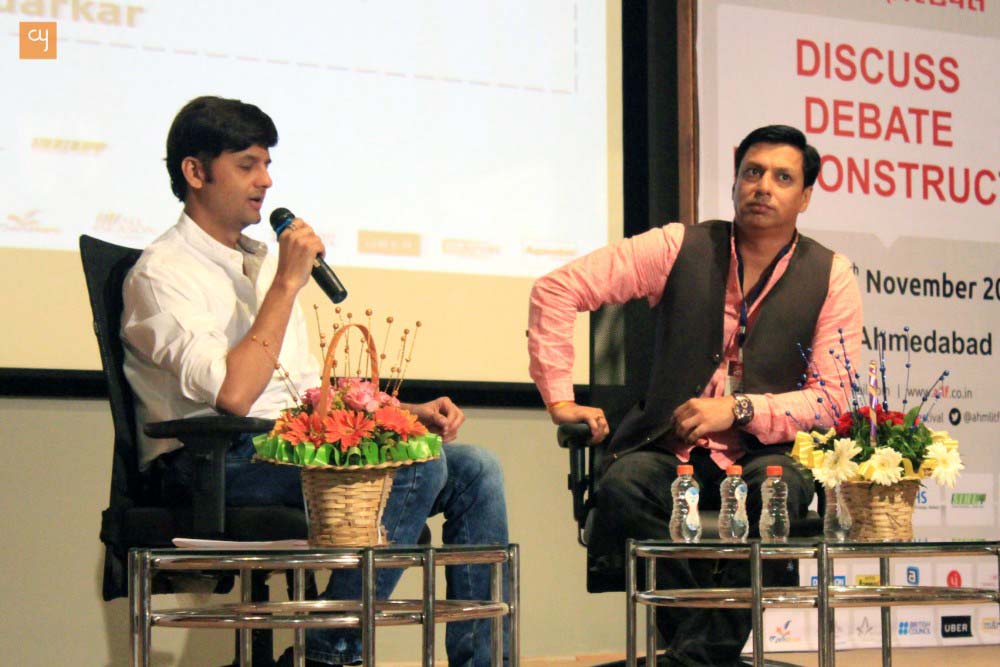 Mr. Bhandarkar is a director who has made realistic cinema on hard hitting subjects and has not shied away from talking about the darker aspects of society. RJ Dhvanit came well prepared and asked the director many pertinent questions about cinema, literature and his journey in cinema.

They talked about a range of thoughtful topics like whether cinema falls in the pantheon of literature, whether only inspirational cinema is literature, the expanding role of social media in our lives and whether that counts as literature.

Bhandarkar talked about how books and learning by watching quality work has added value to his creative journey. He mentioned that he was a school dropout, but despite that he never stopped reading books and newspapers. He got his education in the cinema while running a video library. He talked about how Ardh Satya, written by Vijay Tendulkar was one of the most influential movies of his formative years. He talked about how the works of Satyajit Ray, Shyam Benegal, Subhash Ghai, Ritwik Ghatak, Prakash Mehra and Manmohan Desai were instrumental in his journey into filmmaking.

The director then talked about his shift from consuming stories to creating them, the research he puts into them and the themes he chooses and why. He briefly mentioned his upcoming movie on the emergency during the course of the conversation. 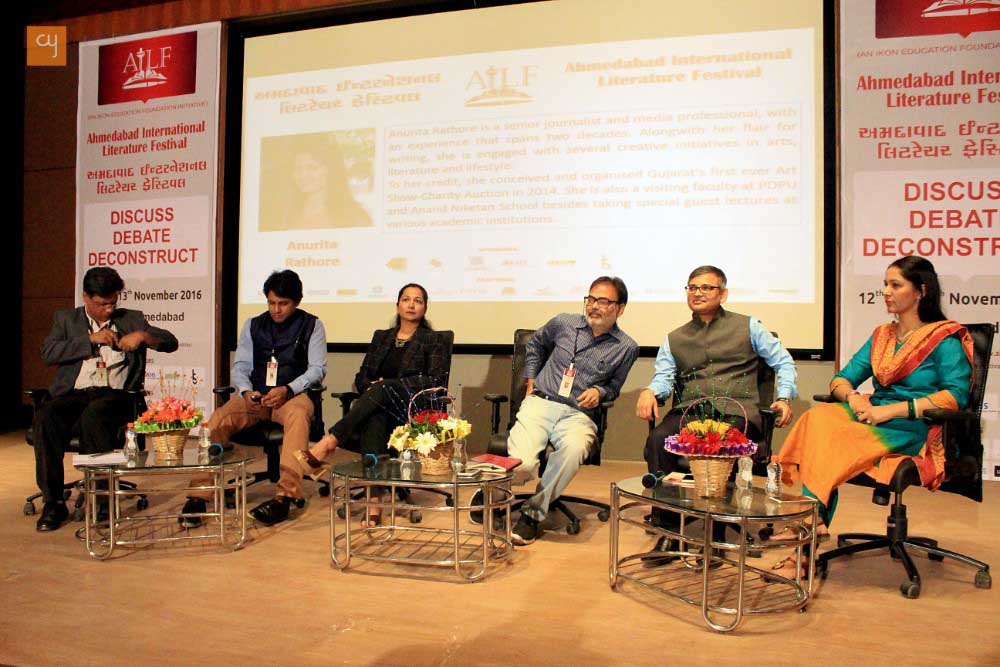 The buoyancy of the start continued with the hard hitting second Session of the festival; that discussed the controversial topic of “Media-driven Stories: How fiction drives the news narrative in present times.”  It was a panel discussion moderated by Pradeep Malik and had the participation of Ajay Umat, Anurita Rathore Brajesh Kumar Singh, Kiran Manral and Tuhin Shah. All the participants of this session have worked in the media for many years and had many insights on its functioning.

They talked about the different mediums like radio, television and print and the trials and tribulations they have to face. They talked about how there is a pressure in media and a fine balance needs to be maintained while also pointing out that things are not as bad as they are made out to be.

When discussing the importance of journalism, one of the panelists mentioned that journalism is the first draft of history. And hence people in this field have to be careful. All in all  the session generated a lot of interest among the audiences. 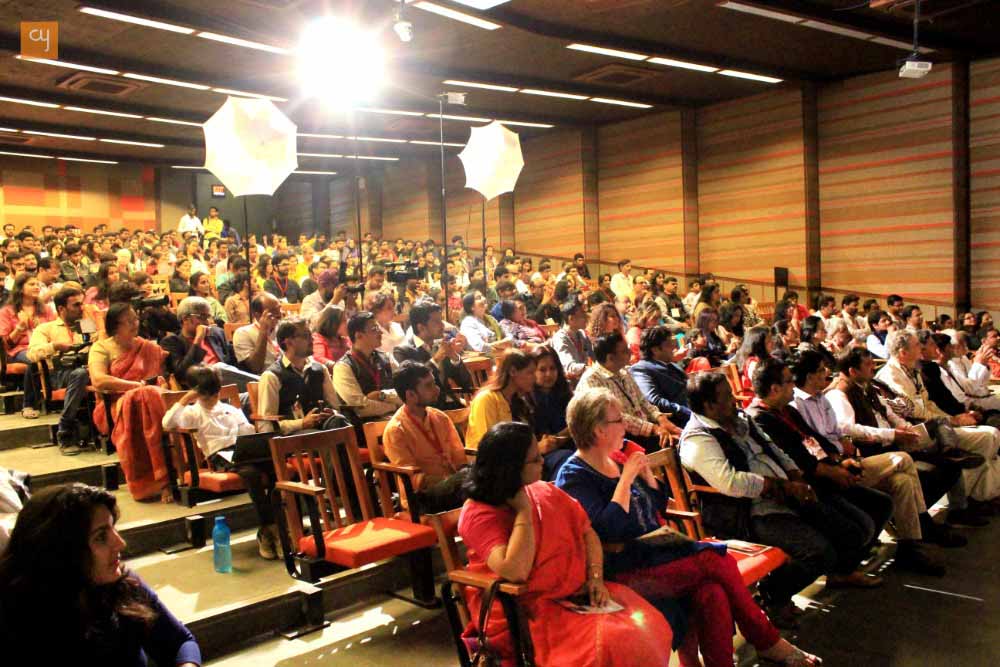