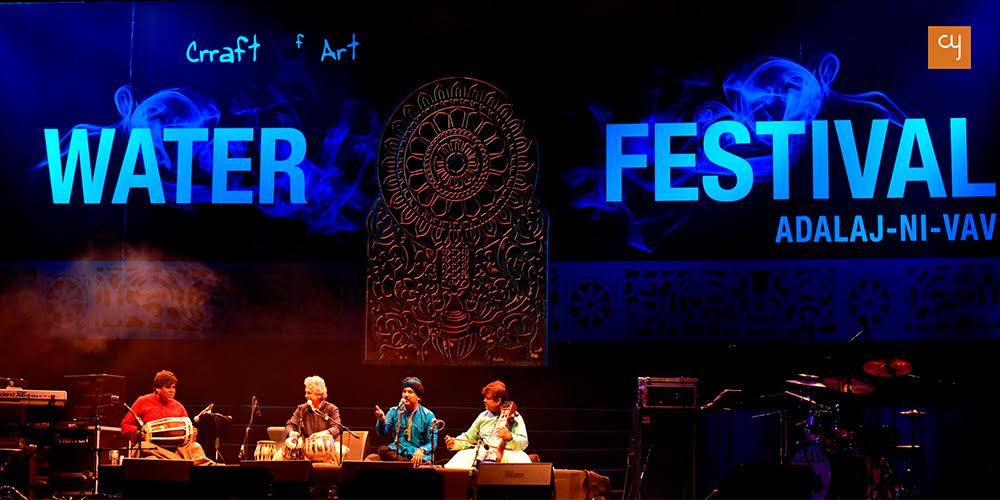 The famed Water Festival of Gujarat brought together musicians of all different backgrounds at the historic Adalaj Stepwell for an evening of fusion fun.

On November 25, 2018, the 500-year-old Adalaj Stepwell in Gujarat blushed pink, aglow with the ambient rays of nicely placed floor lights. As evening fell, crowds came pouring down the worn stone steps to admire the heritage monument that was highlighted as part of Crraft of Art’s annual Water Festival. It was a sight to see – the modern lights, people clicking selfies, all the while, the ancient stone blocks emanating the well’s long history. This is the 8th Water Festival that Crraft of Art, founded by Birwa Qureshi, has put up in Adalaj. Trained as an interior designer and dancer, Qureshi has been tirelessly working to have shows at heritage monuments of Gujarat and finding a way to bring today’s audiences back to their roots, and yet keeping the feel contemporary. For this edition specifically, it is a celebration of old and new, folk and classical, mainstream and abstract. “It’s about senses coming together,” Qureshi shares. The musicians reflect this sentiment, all of them coming from an assortment of backgrounds: Indian classical, Rajasthani folk, jazz, and rock, to name a few. 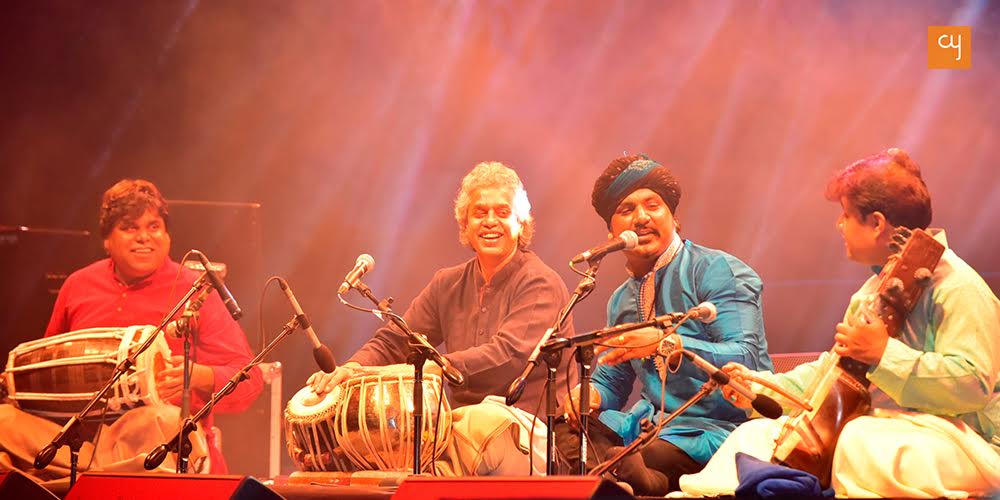 With Navin Sharma on dhol, Arun Kumar on drum kit, and Fazal Qureshi on tabla, it was fascinating to see the three drummers interact and play on different rhythms. And many of the artists come from interdisciplinary backgrounds; Ustad Fazal Qureshi is a decorated tabla player, training under his reputable guru, Ustad Alla Rakha, but he has not shied away from fusion music. Similarly, Sanjay Divecha, one of India’s most respected jazz guitarists, had 5 years of learning sitar. Each of the artists has inevitably took the time to study outside of their main focus. Zubin Balaporia, a keyboardist who comes from the rock and jazz side of music, feels that songs constantly “should be growing organically,” and each of the pieces played were specifically tailored to this band, where each musician gave their own input.

The compositions worked so beautifully specifically because of the artists’ intuitive nature and willingness to collaborate. The duet of Ustad Dilshad Khan and Ustad Fazal Qureshi, was truly that: an equal duet, not an accompaniment of one to the other. They both paid immense attention to each other’s choices: at many points, Qureshi even used his bayan, left tabla, to actually play the notes that Khan was playing on the sarangi. Khan is a celebrated sarangi player, who has trained in the traditional guru-shishya parampara, and apart from playing purely classical programs, has given his music for countless Bollywood films and Coke Studio Sessions.  And as the bassist, Sheldon D’Silva shared, 95% of the concert was improvised, which is a further testament to their extensive study and competence. 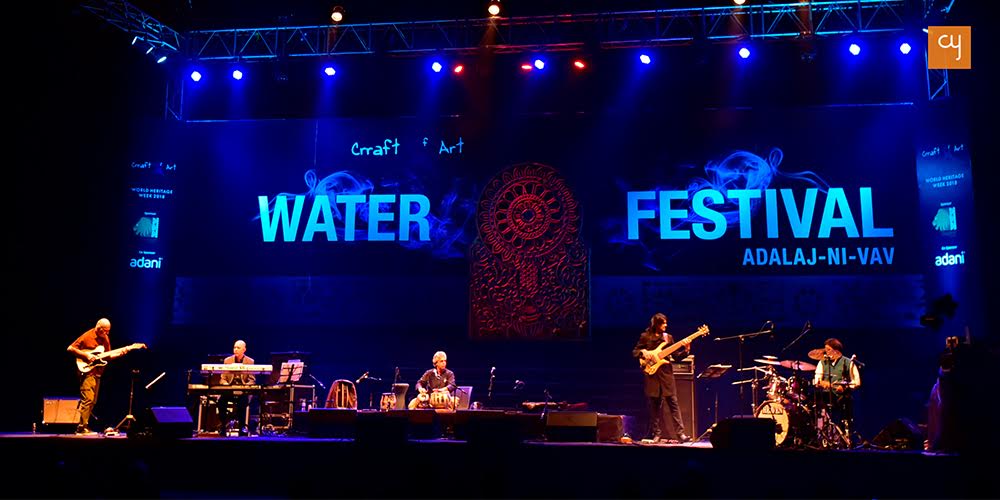 This year, just as all other years, there were new elements added to the festival: in lighting as well as music. Birwa Qureshi experimented with using colour to highlight the monument when in the past, it was usually limited to neutral shades. And in the domain of music, Kutle Khan, a proponent of the Rajasthani folk tradition, came with his powerful songs to showcase the strength of his voice. Though many people have a certain idea about folk, as Ustad Fazal Qureshi shared, classical music has stemmed from folk music, and many of the raagas that artists play today came from the folk raagas. The band played one such raaga, Maand, which is a sweet folk creation that now many classical artists also sing. Kutle Khan just brought a raw power that was unlike any of the other instruments present, a peek into the past, where singers had to learn to project and sound good without a microphone or mixer!

During a candid conversation the artists reminisced about the past, in their own way, of a time where students did not use recorders and stayed all day with their gurus, when there was no, as Zubin Balaporia quipped, “undo button”, and students had no dependency on anything but their minds. It’s a changing world and it has its benefits and drawbacks. Sanjay Divecha’s take was that though the documentation has changed, the information remains the same. Citing a benefit, Dilshad Khan mulled that, without YouTube, his sarangi playing would not have reached as far across the world as it has today. 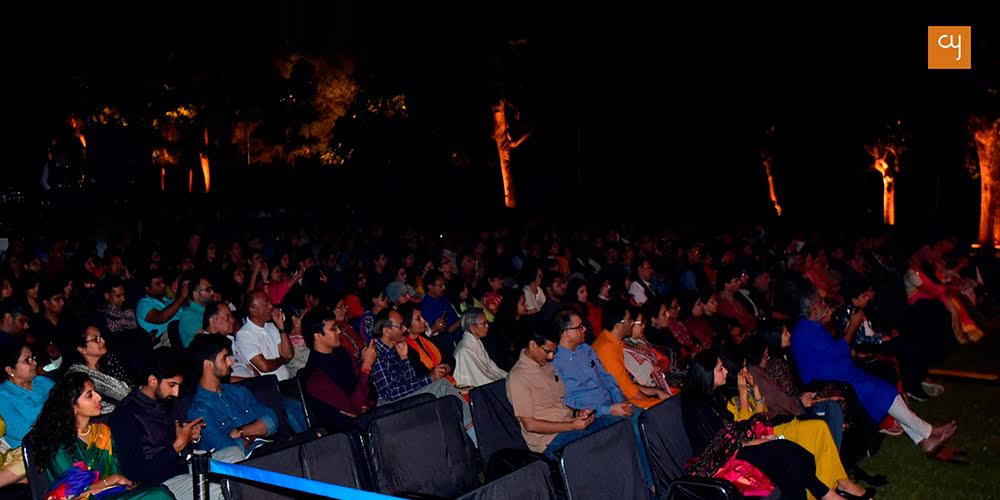 Sheldon D’Silva shared how the aim of fusion is to “make music out of the similarities,” and this is what the compositions did best; create interesting and beautiful music by finding the sections where all the genres overlapped. They took a composition of each musician and adapted it to this specific band. Sanjay Divecha’s in the pocket “Chembur Funk” typically played with a smaller band, became a different creature, featuring lots of rhythm play with the army of percussion players. As did Ustad Fazal Qureshi’s “Seven Heaven”, featuring more character and a crisper feel than the studio version. These fun, collaborative pieces combined with the ancient beauty of Adalaj’s Stepwell made for a truly stimulating evening that showed audiences that adaptation and preservation are both possible, and indeed necessary!