5 Reasons Why A. R. Rahman’s Encore Concert in Ahmedabad is Unmissable

If you’re one whose adrenal glands are pumped by music, then the AR Rahman Encore : The Concert will be sure-fire steroids for your musical self.

Has it ever so happened that you’re about to board a flight to Narnia and suddenly realise that it’s too late to get the tickets? I faced such agonising pain in 2013 when the shutters of a ticket window rolled down right before my eyes while I was standing in the ticket queue for A R Rahman’s concert. I’ve been stamping down on my toes every day since, to punish my procrastinating self. So as soon as news struck my eardrums that the two-time Oscar winner is revisiting Ahmedabad on December 3, I saved my feet from this self-inflicted agony. For now, I can tap them to the music of Rahman.

Organised in partnership with MTV and Live Viacom 18, along with BookMyShow, the Encore Tour will see Rahman touring four cities – Hyderabad, Ahmedabad, Mumbai and Delhi. The tour is a celebration of 25 magical years of Rahman’s music, and this is unmissable for anyone who has anything to do with Indian Popular Music. Here are five reasons why the concert is unmissable.

As a Rahman fanatic, I can go on endlessly about how the Padma Bhushan laureate has been nothing less than a musical reformist in the Indian Film Industry, ever since 1992’s Roja. I’m still mesmerised each time I hear his stirring theme for Bombay. Rahman has, in the span of 25 years, won more than 190 awards for composing music for over 140 films. With every score he has managed to challenge his own style and has succeeded in gifting new sounds to the Indian ethos through popular music.

(2) A Rahman Experience that audience hasn’t witnessed earlier ever

Rahman’s technique of integrating Classical Indian music with electronic and digital tunes brought him to the world stage in 2008. He’s known best for the iconic melodies he developed for Danny Boyle’s Slumdog Millionaire, which shot him to the Oscars and the Time list of the 100 Most Influential People of 2009. As it goes with Rahman, he will be weaving some fresh sounds to his popular numbers to give the LIVE audience a unique experience. Something that is not available online or in his published records.

Celebrating 25 years of the five-time Oscar-nominee’s music, Encore is the biggest ever multi-city tour taken by AR Rahman ever. Besides witnessing Rahman live, audiences will also be able to relish a band that’s drawn from the best musical talents in India, which includes honed musicians from his school of music, the KM Music Conservatory in Chennai.

Rahman has taken nearly half a decade to organise a full musical tour again, so it’s utterly unpredictable when he’ll next plan a concert in Ahmedabad. 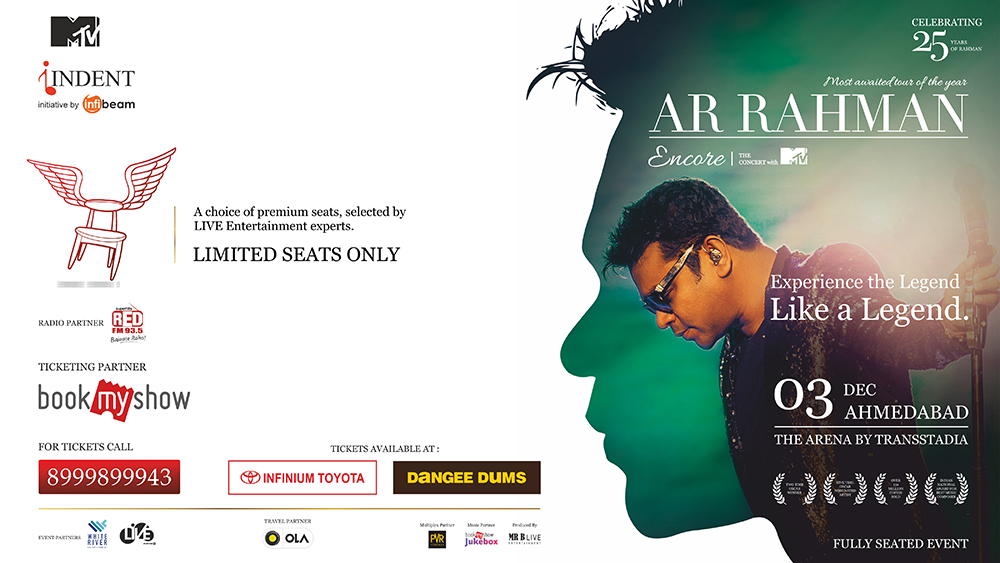 (5) Tickets are within the reach

I’m unaware of the GST effect, but tickets to this time’s concert are much more reasonable than they were previously. The concert is happening at the newly constructed ‘The Arena by Transtadia’ in Ahmedabad. The stadium is a world class facility to experience LIVE events. The ticket price starts from Rs. 1000/- and goes upto Rs. 10,000/-. When we last spoke with the organisers the tickets have been filling up fast, and a Rahman fan should not let regret of ‘unavailability’ come in his/her way.

The ‘Mozart of Madras’ is coming to your city before this year closes. Is there really any reason to think twice?