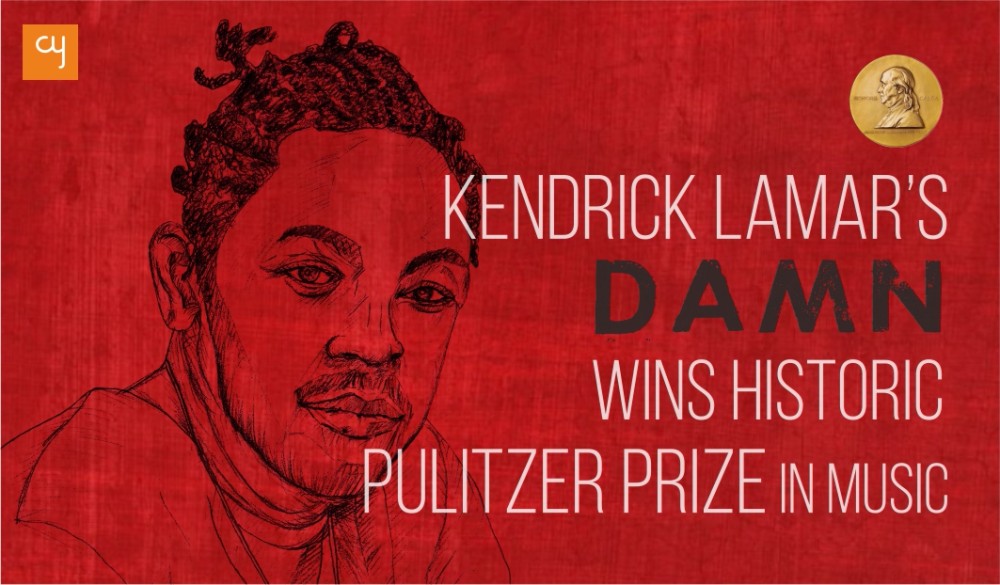 Traditional awards events seem to be taking a heartening turn, of late, for the contemporary creators and modern art forms of today. 30-year-old American rapper and songwriter Kendrick Lamar has won the prestigious Pulitzer for Music in 2018 for his album Damn, in a move that is as startling as Bob Dylan’s win of the Nobel Prize for Literature in 2016, or as Lin-Manuel Miranda’s victory of the Pulitzer in the Drama category for her hip-hop musical Hamilton two years ago. Just as Dylan became the first musician to have won the Nobel against a plethora of highbrow wordsmiths, Lamar is the first rapper and pop artist to have won the Pulitzer for Music, against the many singers of jazz and classical music who have been winning the title since 1943, when the award was introduced. Damn’s win marks the Pulitzer’s growing openness towards other forms of music.

Lamar‘s album Damn – which released in April 2017 and has already sold over 3.5 million record copies globally – led the five-person Pulitzer jurors to a unanimous decision. The committee declared that Damn offers “affecting vignettes capturing the complexity of modern African American life.” Lamar’s songs are known to critique contemporary culture and have a tone of protest. The Afro-American musician has featured chart-topping artists like U2 and Rihanna in his fourth studio album. The album was also announced as the most streamed album of the year. At the 60th Annual Grammy Awards, Damn was announced as the Best Rap Album of the Year, with its most popular singles being Humble, Loyalty and Love.

Lamar’s serious and sweltering work in Damn, which has been lauded for its “vernacular authenticity” by the Pulitzer committee, beat competition from more than 100 nominated contenders, including finalist Michael Gilbertson’s Quartet and Ted Hearne’s Sound from the Bench. Some from the industry find the decision to be insulting, while some are embracing it with all their soul. However, with juror David Hajdu calling Damn “‘the best piece of music”, the occasion marks a historic moment, uplifting the aesthetic value of American rap music for all.

Other Pulitzer Achievers of 2018:

Formed in 1917, the Pulitzer Prize is renowned for recognising achievements from across the fields of newspaper journalism, online journalism, magazines, literature and musical compositions, across almost 21 categories. Each winner is awarded a $15,000 cash prize along with a certificate, while winning journalists in the category of Public Service also receive an additional gold medal.

This year’s Public Service journalism category was nailed by The New York Times investigation team and Ronan Farrow, who sparked the global #MeToo movement by revealing the stories of victims of sexual harassment who had been silenced by influential men from Hollywood, politics and Silicon Valley.

The Breaking News category award went to the staff of The Press Democrat who covered the October wildfires of Santa Rosa and Sonoma County. The award in the Investigative Reporting category was given to the staff of The Washington Post for their persistent reporting on a story that revealed how Republican senator Roy S Moore, while in his 30s, had made sexual advances towards under-age girls.

GQ magazine received its first Pulitzer, which went to freelance reporter Rachel Kaadzi Ghansah in the Feature Writing category, for her unique and compelling reportage on domestic terrorist Dylann Roof and his Charleston Church shooting massacre. New York magazine’s first Pulitzer was grabbed by critic Jerry Saltz who analysed the political undertones of the Whitney Biennale and also the thriving hold of Michelangelo on art.

In the world of literature, the award in the category of Fiction was delegated to author Andrew Sean Greer for his book Less, which is a humane, quirky and witty story of a writer who is almost 50 years old who, plagued by an unfulfilled life and career, decides to travel to various mediocre literary events around the world. The Pulitzer for Poetry, meanwhile, went to Frank Bidart for his career-straddling anthology Half-light: Collected Poems 1965-2016. Playwright Martyna Majok grabbed the Pulitzer for Drama for her mega-scale Broadway show Cost of Living.

James Forman Jr was honoured in the General Nonfiction category for his book Locking Up Our Own: Crime and Punishment in Black America, which takes a stern look at the trend of mass incarceration of black Americans since the 1960s. And in the History category, Jack E Davis won the prize for his book The Gulf: The Making of an American Sea, which talks in detail about the world’s tenth largest water body, the Gulf of Mexico.