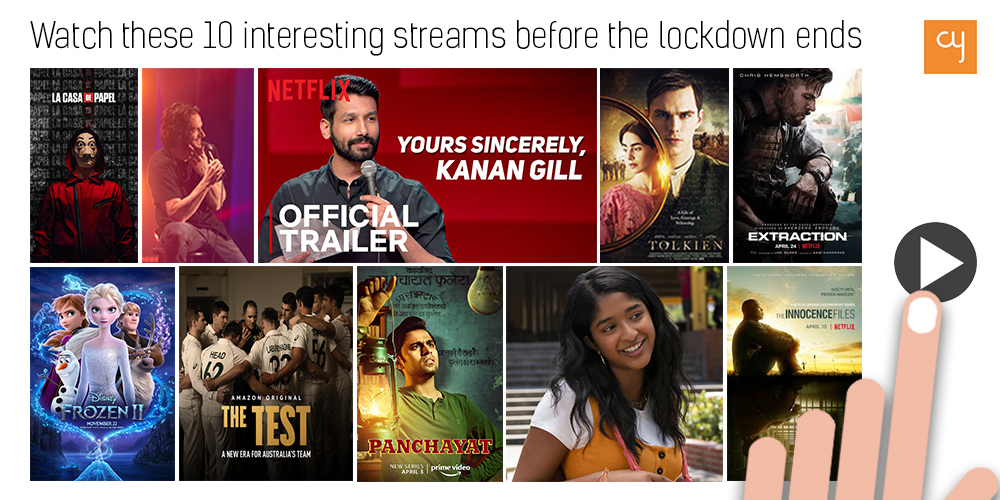 The lockdown period in India is extended for another 20 days. Most of you might have already played out your watchlists, and are searching for newer shows to binge on. Well, here we are at your rescue, here is the list of 10 new web series and movies that are currently streaming or about to be launched on your favourite streaming channels.

The Professor is back!! One of the Netflix’s most popular heist show and the most loved bunch of characters from the streamverse are back! And this time the plot tangles itself deeper in the mystery, and the season promises to bring back the edge of the seat moments that we all crave for while watching Money Heist.  The show has recurring actors from the previous three seasons, along with Tokyo (Úrsula Corberó), Berlin (Pedro Alonso), Nairobi (Alba Flores) and others.

After giving us two amazingly hilarious stand-up shows, Chris D’Elia is back to finish his trifecta. With his funny and unique slapstick style, Chris will offer his thoughts on everything with this bit, from self-censorship to problematic dolphins to lame mutant powers. And with Chris being Chris, we never know where the conversations float after that, but they will for sure roll you off the chair laughing.

From his hilarious home-made movie reviews to becoming a big shot comedian, a lot of the millennials have witnessed Kanan Gill’s rise to fame. But have his goals been fulfilled? Has the aspirations he pursued for as a teenager been conquered? And as he asks these questions to himself, who knew that it will create a hilarious stand-up set?! Tag along with Kanan as he evaluates his lie against his teenage goals which is a dark, yet oddly illuminating, journey.

Brought to you by the Stunt Coordinator of Atomic Blonde and produced by the Russo Brothers (Avengers Endgame), Extraction is a promising action movie with the Thor, Chris Hemsworth playing the lead. The plot follows the adventures of a fearless black market mercenary, played by Chris Hemsworth, and his mission of rescuing the kidnapped son of a drug lord in India. The movie also features Indian actors Randeep Hooda and Pankaj Tripathi in important roles. A small portion of the film has been shot in Ahmedabad and so people of Gujarat have one more reason to watch it on Netflix.

Tolkien explores the mysterious and fascinating story of the J.R.R Tolkien who gave us the greatest adventure stories written in 20th century. He single handedly ruled the genre of fantasy and gave us a whole new world, an entire new language to wander into. Tolkien is a biopic of J.R.R.Tolkien’s formative years as an orphan child who is in the search of friendship, love and artistic inspiration, the experiences of which created the fabric of his famous Middle-Earth novels.

The animated fantasy in its second outing follows the story of Elsa the Snow Queen, as she travels to enchanted forests and dark seas beyond her kingdom. Elsa who is struggling with restlessness, takes this journey in search of peace and calm and the adventure soon turns into a journey of self-discovery. Extremely popular with children and tweens Elsa is hugely popular character. The film is currently streaming on Disney Hotstar.

Starring Jitendra Kumar, Raghuvir Yadav and Neena Gupta, Panchayat is an endearing tale of a disillusioned engineering graduate, who lands himself the most unattractive job that he could ever dream for. The story unfolds as Abhishek (Jitendra Kumar) lands in a remote village of Uttar Pradesh, to assume his government job of Secretary of the Village Panchayat. It is an endearing tale of discovering meaning and purpose in one’s work. The beautifully written material, brings the viewer face-to-face with the issues plaguing rural India by offering a non-judgmental view through laugh-worthy moments.

This docu-series chronicles the period of 16-months of the Australian Men’s Cricket team, after the ball tampering scandal. The period from the time Justing Langer was appointed as the coach to the conclusion of the Ashes. The dreaded incident of cheating that took place in Cape Town, led to severe criticism of the Australian cricketing culture and it led to suspension of teams captain Steve Smith and vice captain David Warner, along with their opening batsman Cameron Bancroft. Justing Langer was given the task of building the team for the World Cup tournament, as well as work towards changing the team’s culture. With real dressing room footage and inside stories of this time, makes this series an exciting and moving watch.

9. Never have I Ever (Netflix – Teen Romance/Series)

Never Have I ever is a story of an Indian-American teenage girl who is trying to forget the traumatic year she has had, trying to re-write her life with the beginning of her sophomore year. She is determined to get 3 things: The opportunity to go to a party which includes alcohol and hard drugs, to get her fore-arms hair to thin out, and to find a loving boyfriend. With Maitreyi Ramakrishnan playing the role of a girl who recently got out of a mysterious paralysis, this is the perfect teen-flick you were looking for.

Bringing you stories of 8 wrongfully convicted victims from the archives of Innocence Project, a non-profit legal organization, this heart felt show unravels missteps and deceits in the American justice system. This 9 part documentary series is for sure not a light watch, but one that is necessary to understand how easy it is to be wrongfully convicted.