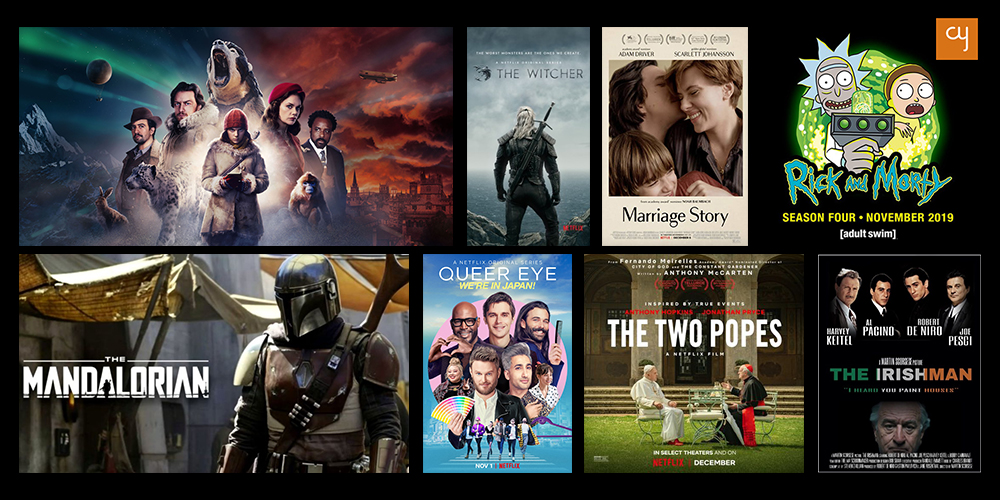 With a variety of web series and films releasing every month, it is hard to pick the best one that you can follow. Here’s a list of 8 most promising ones that we believe you should definitely check out.

Online streaming has become an integral part of our pass-time. It is a great way to relieve stress and is an easy conversation-starter for many. But with so many shows to choose from, the ones that catch our attention most are those that seem to offer something new. To start a new series that is rich in drama, deals with an interesting subject and is also entertaining at the same time can be a tedious job, especially when there are a lot of options to pick from.

To make your task easier, we have shortlisted 8 upcoming web series and films that we believe will truly be worth your time.

His Dark Materials is an adventure drama adaptation of a book by Philip Pullman of the same name. The story revolves around an orphan named Lyre (Dafne Keen), and her quest of finding a kidnapped friend.

It seems like a mundane plot until you realise that Lyre comes from a parallel universe where science, theology and magic are entwined. Her search for her friend turns into an adventure of children trafficking and unravelling the mysterious phenomenon of ‘Dust’.

With a star cast of James McAvoy, Dafne Keen, Ruth Wilson and various other prolific actors, the show seems to promise a series that will have you follow the journey of the characters till the end.

After 2 years of making us desperately wait for some extra-terrestrial craziness, Rick & Morty is back with its fourth season. And as per Dan Harmon and Justin Roiland at the San Diego Comic-Con, we won’t have to wait so long for the next season since the work on Season 5 has already begun.

We hope that the fourth season continues to entertain us with nefarious schemes of Rick and that it crosses the boundary of the bizarre. Well, we’ll let you be the judge of that:

Witcher fans have long been waiting for this show and finally, the day of its release is near. Adapted from a fantasy series of novels and short stories written by Andrzej Sapkowski, the plot is set in an unnamed continent which is filled with magical creatures and elves. The ‘Witchers’ are a class of genetically mutated humans who get supernatural abilities by drinking potions, poisons and other elixirs. And out of them, Geralt is hailed as the mightiest witcher to ever wield a sword. The plot of the series revolves around his adventures and chaotic life.

There were speculations that Mads Mikkelsen would play the part of Geralt. However, it is finally being played by Henry Cavell. With an extraordinary built, intense persona and Superman-like jaw cut, Cavell fits perfectly into the character of Geralt of Rivia.

If you are a Star Wars fan, we’ve got good news for you. Star Wars franchise is releasing an adventure series based on the stories of Jango and Boba Fett, called The Mandalorian. This space western web tv series will be set five years before the events of Return of the Jedi.

The show stars Pedro Pascal (remember Narcos?) as the Mandalorian, a bounty hunter travelling in the far galaxy. Watch the trailer below, it is very difficult to miss this one:

Filled with drama, emotions and a glimpse into the disturbed life of an unhappy couple, Marriage Story is an insightful take by Academy Award-nominated filmmaker Noah Baumbach on a family’s will to stay together and survive a divorce.

With a great cast of Scarlett Johansson, Adam Driver, Laura Dern, Ray Liotta and Alan Alda, this Netflix original shows potential to be worth your time. Taking you on an emotional roller-coaster, here is the trailer:

Bringing you a completely unorthodox reality show, “The Fab Five” are on their journey to bring Japan out of the closet. Queer Eye is an American Netflix original series featuring a new ensemble of five gay professionals in the fields of personal grooming, fashion, interior designing, entertainment and culture. “The Fab Five” consists of Antoni Porowski, the food and wine expert, Tan France, the fashion guy, Karamo Brown, the culture expert, Bobby Berk, the design expert and Jonathan Van Ness, the grooming expert.

On their exciting expedition to Japan, they will explore the country’s rich culture, spread joy and help four Japanese men and women gain the confidence to be themselves.

You’ve seen Anthony Hopkins become a dreadful cannibal, mad scientist and any role that suits his menacingly suspicious look. But to see him play the role of Pope Benedict excites me.

The Two Popes is a Netflix Original biographic drama film that narrates the story of the most dramatic transitions of power in the last two millennia. Alongside Jonathan Pryce as Cardinal Bergoglio, The Two Popes will take you behind the walls of the Vatican City when Pope Benedict names his future successor and discloses a secret that would shake the foundations of the Catholic Church.

After 11 years, two of the most iconic actors, Al Pacino and Robert De Niro, will be starring in a movie alongside each other. And what’s even better is that the one bringing them together is none other than Martin Scorsese. With these three Academy Award winners, the movie will surely blow your mind.

The Irishman is a story of the nostalgic journey of a mob hitman and World War II veteran, Frank ‘The Irishman’ Sheeran (De Niro), who looks back on the events that forged his career as a hitman, his associations with the Bufalino crime family and his involvement in the disappearance of labour leader Jimmy Hoffa (Al Pacino), his long-time friend.