The Lesser Known Revolutionaries: Indian Architects you must know of 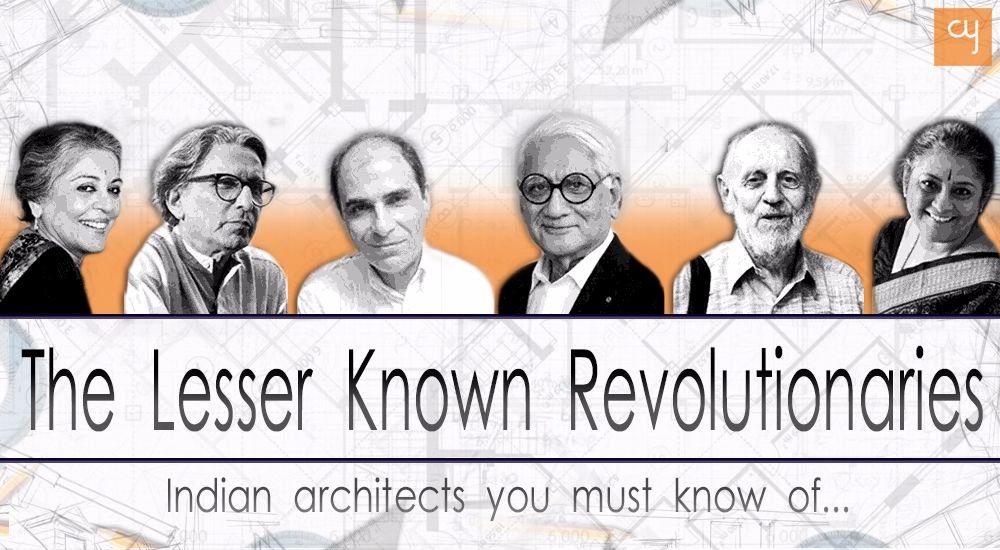 Let’s face it. We know little about our architects, who mostly go un-applauded. It is quite alarming considering that India has such a diversely rich architectural tradition, one that has in many ways given to the contemporary architecture. Here’s CY listing India’s Top Best 9 Indian architects…

At the forefront of contemporary Indian architecture stands the late Charles Correa. Known for his flair of balancing sensitivity, functionality and preservation of history. At Kanchanjunga Apartments, flats merge courtyards and the connected spaces of traditional living with the urban context of an apartment building. The celebrated sweeping lines of the Champalimaud Centre for the Unknown in Lisbon are exemplary and talk volumes about his culturally rooted aesthetics.

Now here is a man that has learnt from two of the greatest names in Global architecture and has gone on to make a name for himself on his own terms and with his own distinct style. Before practicing in India, Doshi worked with modernist and contemporary giants, Le Corbusier and Louis Kahn. Doshi retains that modernist edge but with a distinct Indian spirit. The National Institute of Fashion Technology, on the other hand, interprets the Ahmedabadi baoli – or step-well – alongside modernist steel and concrete.

Nobody understood climate and its texture as well as the late Achyut Kanvinde. Kanvinde who was working with Walter Gropius, a modernist was involved in geometrical figures, reasonable shapes, metal frames and RCC. His creative outputs have given plenty sensibleness about the Indian atmosphere and narrates social transformation. At Kanpur campus of IIT, bridged passages provide sheltered trails and hooking up isolated vicinity of the institution.

Sheila Sri Prakash leads the conversation about environmentally and socio-economically sustainable architecture. Her designs often include green spaces and forms that can shelter from heat and rain, let in sunlight and maximize the flow of air. She is also interested in finding creative solutions to the pressing needs of India’s rising urban population, whilst always retaining the cultural heritage of the places she builds for.

Having together constructed and preserved infrastructures while considering preservation of the historic importance Brinda Somaya considered ‘the conscience of the built and un-built environment’. Her profile also consists organizing architectural treatment plans for an instance the Bhuj project, where village residents were involved in conversing about developing its concept as well as design.

If there was someone that quite matched the public demeanor of Zaha Hadid in India, it would be Contractor. Called out several times as unoriginal, the glamour obsessed Contractor is still amongst most sought after architects in the country. He rules the skyline and makes urban living a glamorous deal. His designs are mostly massive reverence to steel structures. However, he has even adopted varied forms, visible in the Global Education Centre of Mysore which amalgamates the conventional symmetry, ceiling and pillars in Mysore palaces with Doric architecture.

Raj Rewal is another complicated interpreter of the Indian colloquia. He is inspired by Indian architectural models and ancient cities like Fatehpur Sikri (that also inspired his Asian games village). Its courtyards, gardens and winding streets turn it into a living heritage museum. Rewal has a preference for sandstone and brick.

The late Laurie Baker was a Britisher who got an Indian nationality. Baker always appreciated the intellect of room space residing in Indian design practises. With the support of his affection for contemporary, organic and durable architecture, he utilised conventional methods and apparatus while testing the latest ones. With these, he would shelter areas from warmth, allow sunbeams and air, use minimalistic stuff and consistently delivered unmatched artistic magnificence. His art consisted materials and designs of brick jaali walls, Mangalorean clay tiles, plaited palm thatches, lakes, verandas and dome shaped ceilings and ramparts to transfigure the Indian architecture.

Nari Gandhi has a practical, tangible, artisan sort of lookout towards structural designs. His initial response was constantly maintained to the specificity of the place. His aesthetics are well known for consisting striking innovations like using stack of pots for making a cloister or developing a stairway of bricks.