The dying art of shoe-making 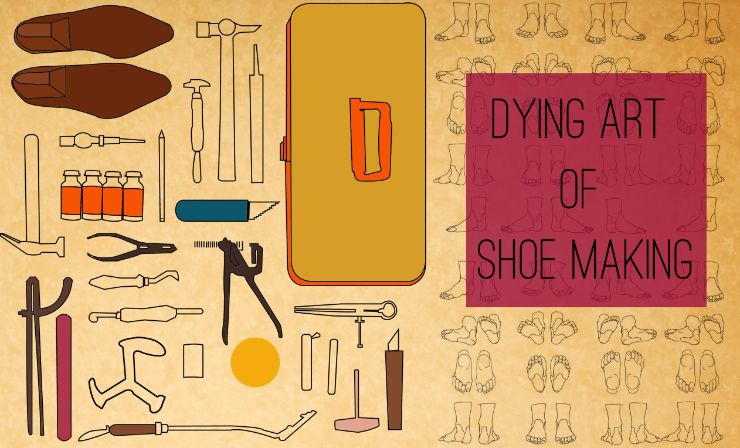 If you are walking around the labyrinth streets of ghee kanta, ask for Dahya kaka’s shop and even a stone would direct you. And if you decide to ask a human, be ready for the counter question – ‘Dahya kaka Jutta wala?’ Dahya kaka and juttas are considered as synonyms in the old city of Ahmedabad. He and his family have been into making footwear for generations now.

Dahya kaka learned the art of shoemaking from his father, Deshabhai. Post his demise, Dahya kaka took forward the family tradition of making ‘juttas’. Dahya kaka’s wife, Jeeniben, too learnt this technique and started making juttis that would suit the feminine taste-buds. They opened a shop inside their house and started spending their days making mojhris. From a not-so-famous name, Dahya kaka turned into a celebrity in a few years. His mojhris and chappals were not only famous for the craft, but also for one amazing quality – they lasted for more than 5 years. Buy a Dahya kaka mojhri and you would not have to visit their shop for the next 5 years.

Their sons, Lala and Mahesh, inherited the art of shoe-making. Lala would come back from school and start helping his parents. His early days at work only included sticking the glue. Slowly, he tried his hand at cutting the leather. By observing his father patiently, he learned every technique of shoemaking. Mahesh, on the contrary, was born with this talent. He was the youngest and definitely the finest shoemaker in the family. He would try new designs and people would love it. Most of his weekends were spent on successful experiments in innovative shoemaking. Dahya kaka was delighted as he trained both the sons to be the finest shoemakers.

Even after being fine shoemakers, business was hard to come by. The influx of mass produced and cheaper footwear made things worse. The times had changed. No one really cared for handmade shoes anymore.Dahya kaka’s deteriorating health only added to their troubles.

After fighting cancer for two years, Dahya kaka died a few days back. And much before his death, Lala and Mahesh had to leave shoemaking to help the family pay the hospital bills. There’s hardly anyone who asks for handmade footwear or Dahya kaka in ghee kanta anymore. But you’ll still find Jeeniben at their small shop. Whenever you visit, she shares some interesting tales from the days gone by with a ‘kadak-meethi chai’. Dahya kaka still lives on in that house but what died is the art of shoe-making.