Raw Art: Writer Esther David on the Usefulness of Art as Therapy 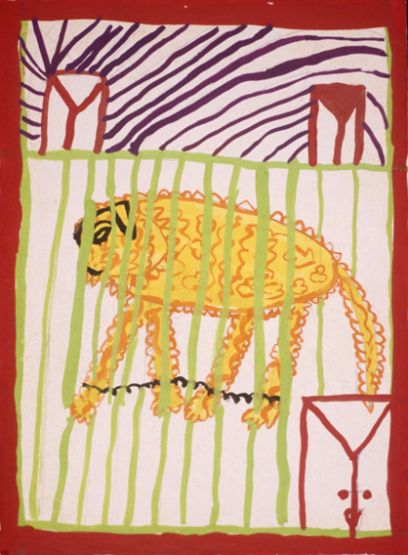 In this painting of a caged lioness, we get a glimpse into the world of Meena. Ten years old and illiterate, Meena wants to fly, go to school and dance. But she is a labourer working at construction sites. Like the lioness in the painting, she feels chained and trapped. By fifteen, Meena will be married.

This is one of the many stories that writer Esther David encountered over the course of thirty years, as she explored art in the underprivileged areas of Ahmedabad.  She recounts another story,

Meena often came with Usha her neighbour. For almost five years, I never heard Usha speak. She often painted violent situations like aggression, death and suicide. Almost every day she painted closed doors. Slowly, I learnt that when Usha returned home from school, she had to cook for the family as her mother was sick and bed-ridden. She then had to do the house work. Maybe there was a certain amount of violence behind closed doors. After five years, Usha started opening up and talking to us. This is when the doors in her paintings started opening, as her mother was on the road to recovery.

Enabling others to express their stories, often without language, has been a passionate pursuit for Esther David. ‘Book of Rachel’ earned her the Sahitya Akademi award in 2010 for giving voice to the community of Jewish Indians. And to tell the ‘sea of stories’ that resides in herself, David has continually explored diverse mediums of expression like sculpture, art, illustration and writing. An art critic as well, it is only fitting that her critical spirit would bring her to the fringes of the art world – into the domain of ‘Raw Art’. She explains how she began to question whether it was possible to be creative without formal education.

When I was a student at Vadodara’s Faculty of Fine Arts, I was not comfortable with the academic style of art education. I was influenced by the theories of Jean Dubuffet, a French artist who created the cult of Art Brut, or Raw Art, in Europe and collected art works of untrained artists. He wrote – “Art Brut is the opposite camp of the camp of knowledge, which we often referred to as culture. Its troops wear no uniform, they are not dressed in fine clothes, nor do they bear glorious titles, they are not recruited from well-known schools, but from the ranks of common people […] They could be described as visionaries […] as they work with complete liberty.”

Driven by this influence, David worked with children from the Devipujak or Vaghri community. Through clay, they expressed their fears. Most prominent was the shared fear of a man in a chair, a sahib. Their expressions of desire often portrayed the wish to sleep in a bed. The response towards David’s workshop was so enthusiastic that she found mothers secretly sculpting toy forms and passing them off as their children’s. Some were so ‘daringly spontaneous’ – like that of a bull standing with its hooves on a couple’s shoulder – that she couldn’t imagine making them herself.

One day, while passing by in a rickshaw, David saw a beautiful quilt that was hanging on the verandah of a house. Its maker Devooben, burdened with several daughters and a difficult married life, tried to give colour to her life through the memory of a childhood spent in Saurashtra. “Without ever having seen Op art, her quilts had a tremendous strength of creating optical illusions ” says David.

Another chance observation led David to some brightly coloured tiger-heads that adorned the entrance of a house. This was the house of Lavingben, an illiterate widow with eight children.

During the festivals she sold colourful clay bowls. She had learnt the technique from her grandfather – of making her own mixture with clay, paper, raw glue and fenugreek powder.  After a lot of persuasion she agreed to make masks for me using the same technique. Slowly she started making animal and bird figurines.

Lavingben’s work was strikingly original and became quite popular. Soon, orders flooded in for reproductions of her work. But Lavingben refused to compromise, arguing that her art was not concerned with what other people wanted from her. David iterates that this is why such work is also called Outsider Art – “because it has no place in our society.”

When the works of these natural artists began to gain recognition, the UNESCO sent an invitation to exhibit their work in France. David continued to work as a consultant with NGO’s. Increasingly though, she noticed that the workshops were being seen as income supplementation programmes – as stepping stones for starting craft shops. She faced a wall when trying to communicate that this art revolved around the process and not the product.

So I started my own organization ‘Action through Art’.

I closed this down in 1996, as I could not create a balance between artistic expression and financial returns.

Esther David and I pored through piles of drawings. She had just dug them out from deep under a bed, where they had lain for some years. She hadn’t spoken about this work for a long time.

Overwhelmed, I wondered – do we use art to its fullest potential? I was aware that she had tried to bring art into the confined world of the women in Ahmedabad’s prison. But her experience had hardly been encouraging – involving a long and harrowing process in which the jail authorities subjected one to constant scrutiny. She said with a note of sadness,

Nobody sees the need for an activity in which the unsaid becomes said.

In the face of market-driven forces, society’s failure to acknowledge art’s role in making us more human only hinders collective progress. David agrees that there is a necessity to extend art to treat mental health issues, and to bring it to women’s homes, hospitals and remand homes for children. Jean Dubuffet’s collection of Raw Art, that spans his forays into mental hospitals and prisons, remind us of this unexplored potential.

Several people have used art as therapy in their own lives. Tagore was known to ‘paint with fury ’. Amit Ambalal and Bhupen Khakkar are examples of untutored artists today who felt intuitively urged to explore their inner worlds. In a society that views everything in terms of its utilitarian benefits, it is perhaps time to counter the remark of Oscar Wilde (whom I admire) that ‘all art is quite useless’, with resounding action to the contrary.

All images are from Esther David’s private collection.