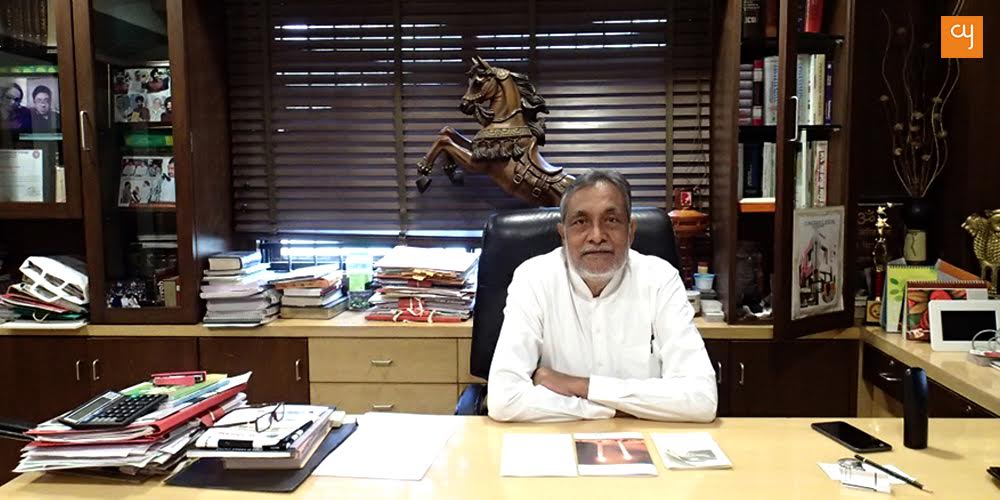 Ahmedabad-based advocate AC Damani is a man of many hats. Besides travelling to villages to solve revenue disputes of farmers, he has also published six books in Gujarati. Here, he talks about how the demise of his mother awakened the writer in him and why patriotism runs in his blood.

Advocate Ashok Damani, popularly known as AC Damani in the courts of Gujarat, is a reputed revenue lawyer of Ahmedabad who is passionate about inculcating Gandhian values into everyday life. As though to ensure this happens, the man has even kept artworks and sculptures of Bapu as reminders at his multi-storeyed office located in the heart of the Ahmedabad. As soon as I entered the premises, I was greeted by a bust of Bapu skillfully carved by the hands of Gandhian sculptor Kanti Patel. But my purpose for the visit was not just to look at Damani’s art collection and talk about his legal practice in Ahmedabad. I wanted to know about the other side of the man’s life, of his works as an author of six books in Gujarati, including memoirs, and his vision to write several more.

Damani initially worked as a mill worker and grocery store attendant when he came to Ahmedabad from the small town of Songadh in Bhavnagar. Through the help of a relative, he began studying law while performing small-time jobs on the side. He soon entered the legal field and is now an established name in it. His sense of social responsibility pulls him to travel from village to village to solve land disputes of farmers and other less privileged citizens of Gujarat, who can’t comprehend the intricate aspects of revenue law.

The mantra of Damani’s life is “Jan Jage Jag Jage”, which means, “If people are wakeful, then the whole world will be wakeful.”As our conversation unfolded, I could feel how Damani, through his optimistic attitude, strives to wake people up in every moment of his life. Each morning, unfailingly, he wakes up before dawn and arrives at the Gymkhana Club to swim, where he fondly greets not only his fellow fitness partners, but also every passerby, with the word“zordar” (excellent) to boost their morale.

Patriotism runs in the blood

At the age of 70, the 6 feet tall, broad-shouldered lawyer starts every day with the Indian National Anthem. He explained, “During the Swadeshi Movement, my grandfather owned a humble local business. He burnt an imported silk cloth in the middle of the crossroads to support the national boycott of foreign goods. My father was imprisoned for almost 4 years while participating in the Indian freedom struggle. My mother, who inaugurated my office in 2006 with a flag-hoisting ceremony, even at such a senior age, covered her head with a piece of cloth to signify her respect for the national flag. Respecting the nation is in our blood.”

With the patriotic spirit pumping through his veins, Damani celebrates Republic Day and Independence Day like they are personal family occasions. This is because his mother once asked him to swear a vow that he will celebrate Republic Day and Independence Day with utmost respect while he is alive. This is why he unfailingly celebrates both occasions, every year hosting a grander celebration than the previous year.

Awakening the writer within

“I loved my mother a lot,” said Damani, moist-eyed, “All four of my brothers, who are now staying in Ahmedabad, had a dedicated room for her and she kept travelling from one house to the other according to her free will. But nine years back, when my mother and I were having lunch together, I lost her. The paralytic attack struck her on December 25, 2010. And in her remembrance, I shaped my grief into words and started pouring it on paper methodically. My first ever write-up was a letter dedicated to my mother, which was appreciated by a senior Gujarati writer. And I then amassed the courage to write my first book, which too was dedicated to the brave lady.”

Damani’s first book was dedicated to his mother and called Je Rah Jove Che Te Maa. Since then, he has authored six Gujarati books and is already in the process of writing three more. He expressed that he aims to write at least 21 books before his life’s journey ends. After his first book, Damani continued to explore his life’s pursuits through Kaifiat. He then wrote Nimit Falit, a tale of self-introspection. He also wrote Chamber Katha, a compilation of professional life experiences from within his cabin. He experimented greatly during these years and also authored a fictional story called Teesri Manzil.

Since the day Damani lost his mother, he never stopped writing a confessional diary. His diaries, which are preserved in his personal cabin, are being digitized for future publishing purposes. They contain his most intimate secrets, which he only wants the world to know once he has left it. The man has admitted to the many things he has achieved and failed to achieve in the pages of his diaries. While talking about his ongoing writing projects, he mentioned that he is in the process of compiling an anthology having all his Facebook posts, and that he is writing sequels for the books Kaifiat and Chamber Katha.

Civic duties beyond the lawyer’s desk

A socially aware citizen of the city, Damani often writes letters to top officials of the government, particularly about issues of civil convenience. From addressing the conditions of roads to writing about how top delegates should conduct their duties more lawfully, Damani’s letters have touched upon many topics.

His enthusiasm to give back something culturally rich to the city also led him to encouraging the idea of 079 Stories, an emerging culture hub in the plush western suburbs of the city, which has been founded by his daughter-in-law Purva Damani. Furthermore, he also strives to felicitate people who are doing something for society. Among those honoured with the award are social worker Muktaben Dagli and differently abled farmer Genabhai Patel. Through Jagrut Jan Trust, for more than 5 years, Damani has been organising motivational lectures at various schools in Ahmedabad and has written 60 editions of the Gujarat Revenue Law News journal. The journal talks about laws and his personal experiences and also gives feedback on legal matters. It is circulated monthly at a nominal price without any advertisements. Damani still continues to contribute articles in the Jagrut Nagrik journal, which comes out every three months.

Damani is perhaps an excellent example of an influential man who has been serving with all his heart. With hardly any training in the creative fields, he has not only been delving into writing by the will of his spirit, but also been lending patronage to the arts and culture. Above all, the man motivates us to practice contagious optimism every day.