The Man with the Magic Hands – Dadi Pudumjee talks Puppetry 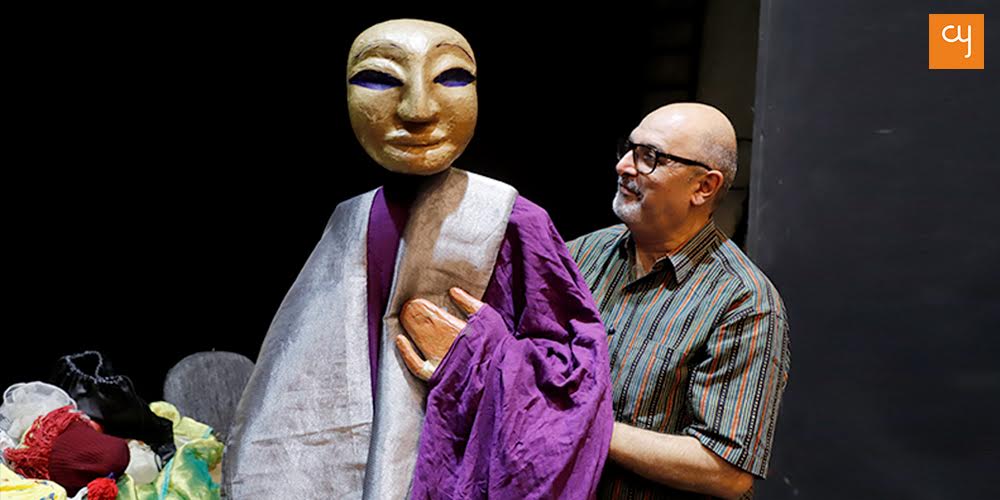 Did you know that the art of puppetry has a different name in different parts of India, based on its make? So says puppeteer Dadi Pudumjee as he talks about his efforts to make puppetry a relevant art form, and his latest internationally touring performance on Mahatma Gandhi.

Dadi Pudumjee feels awestruck every time he watches a puppet die on stage. “There is a lot of melodrama in a puppet’s death,” remarked the 67-year-old puppeteer at the 16th Shree Ravishankar Raval Lecture Series in Ahmedabad on February 27. As soon as he said this, an audience member present at the Gujarati Sahitya Parishad auditorium requested him to demonstrate the death of a puppet on stage. The expressive Pudumjee, who was carrying a suitcase full of glove puppets, string puppets and also semi-sculptural puppets, chose a small body puppet to enact the scene. Without saying any words, the puppet fell to the ground and lost its motion. The audience was moved. Though we knew that this was all a play of Pudumjee’s hands, we were captivated by the storyteller’s performance. In that moment, we realised the meaning of something he had spoken a few minutes back while performing an act using two shoes, “Puppetry is like a vessel; half of it is filled by the artist while the other half is filled by the audience.” 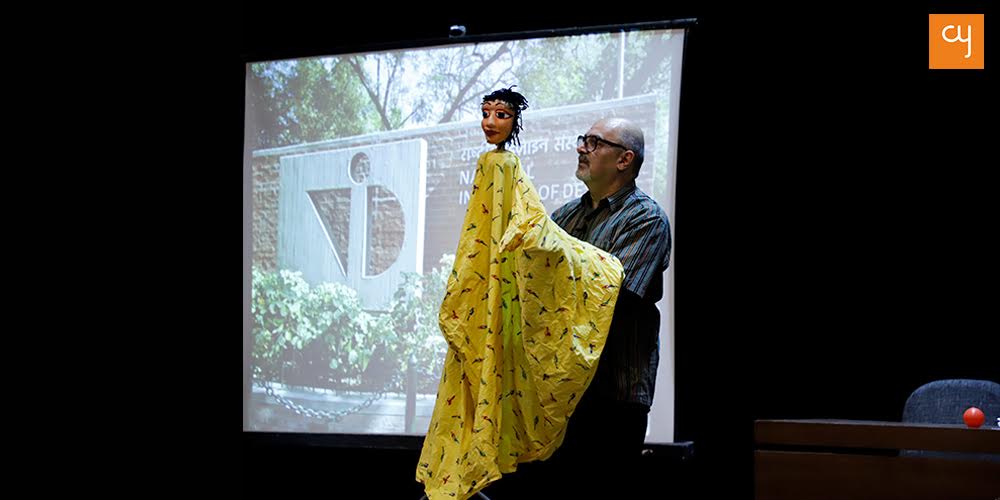 Back in 1971, a young Pudumjee was studying at the National Institute of Design. He pursued puppetry as a leisure pursuit and learnt the vocational tactics of the profession from Meher Contractor, a Sangeet Natak Akademi Award laureate, at Darpana Academy of Performing Arts in Ahmedabad. An expert in shadow play, Contractor was the founder of a puppet theatre group called Darpana Puppet Troupe, and was an internationally acclaimed puppeteer who served as vice-president at UNIMA, an International Puppetry Association affiliated with the UNESCO, where Pudumjee is currently serving as President. Pudumjee later went to Marionette Theatre Institute in Stockholm and advanced his puppetry skills under Swedish performer Michael Seschk. He went on to work with Japanese living legend and Bunraku puppetry master Senoska Yoshida. Pudumjee has worked a lot towards uplifting the art of puppetry. He founded the Sutradhar Puppet Theatre in New Delhi in 1980, and later The Ishara Puppet Theatre Trust.

Ishara, an initiative that works to strengthen the art of puppetry in India by focusing on the technical, social and aesthetic aspects of both traditional as well as contemporary schools of puppetry, recently celebrated the 17th edition of the Ishara International Puppet Theatre Festival. The festival was held from February 1 to February 9at the cosy India Habitat Centre, New Delhi. Initiated in 2001, Pudumjee informed that the international puppet festival, whose idea is to create more performances of Indian puppetry, has hosted puppeteers from over 100 countries so far. During a tete-a-tete, the man with the magic hands proudly confessed, “Previously, we were skeptical if people from Delhi will pay tickets to watch puppetry. But now, each ticket is sold at almost Rs 400, when it initially started at merely Rs 20.” The organiser of the privately funded international festival chuckled, however, when I asked if any financial aid is provided by the Ministry of Culture for the event. “There are a few traditional puppetry groups that are sometimes sponsored by the Ministry but, as such, we have never even applied to get one,” he said. 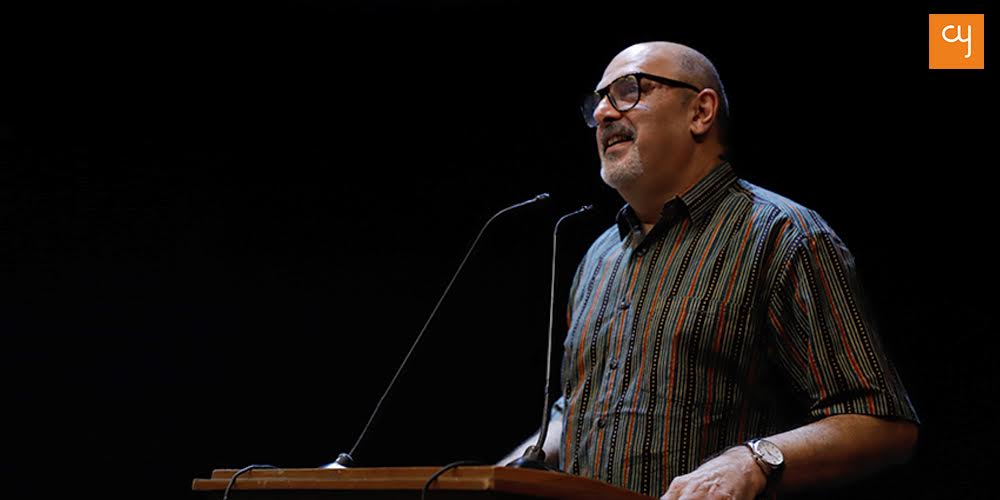 During the lecture in Ahmedabad, the Padmashree recipient explained that there is a different name for the art of puppetry in every region of India, and it is based on the material of the puppet, rather than the method of performance. He elaborated,

“In English, the generic term for this art is puppetry and, likewise, we assume that in India puppetry is called Kathputli. But the term literally means Kath Ki Putli (wooden puppet) which, really speaking, only reflects the string puppetry of Rajasthan. All the 8 Indian states practising traditional puppetry have their own name based on the material the puppets are made of.”

In 1970s Dadi Pudumjee has also worked for ISRO’s community TV programmes with national award-winning theatre artist Kailash Pandya and reputed Gujarati theatre personality, Pransukh Nayak. Remembering the good old days, the Sangeet Natak Akademi Award laureate said, “We introduced new puppets every week in our programme and brought stories from all over the world. Through puppets, and especially through the alter-ego character of a donkey, we performed sensitive things that couldn’t be performed through live actors in theatre. This was probably the first time puppets were made to be part of Indian TV serials.”

This year, the Ishara Puppet Theatre Trust is travelling across nations to celebrate the 150th birth anniversary of Mahatma Gandhi through a puppetry performance called Images of Truth. The visually experiential stage show, which will be portrayed without words and only through world music, will depict the ideologies of Bapu. The Ishara man added,”It starts from the present and goes into a flashback. The show has gone to Egypt, Singapore and South East Asia. And while it was being performed in Iran, the puppet handed out English quotations of Bapu to the audience, which had to be translated into Farsi. And then surprisingly, in the end, there was someone who handed out a whole booklet of Mahatma Gandhi’s quotes in Farsi. It was then that we realised that primary schools in Iran have a whole chapter on Gandhi and his ideologies, as part of their curriculum.”

India has celebrated its historical association with puppetry since the 2nd-century B.C. And it is inspiring to see stalwarts like Pudumjee making the age-old art form relevant in contemporary times, transforming it into a medium for entertainment as well as education. To follow the happenings of The Ishara Puppet Theatre Trust, log on to www.isharapuppet.com or follow their Facebook page. 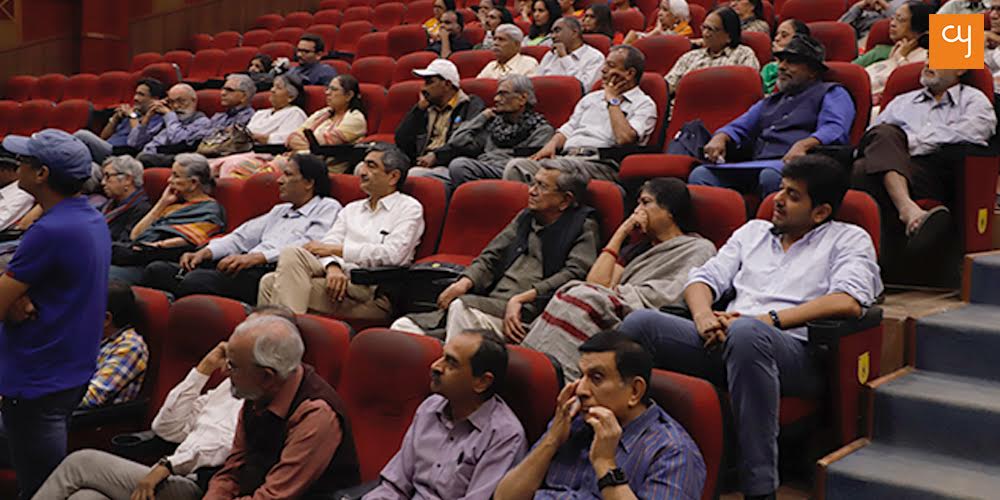