Hey Frida! Looking back at the original Material Girl 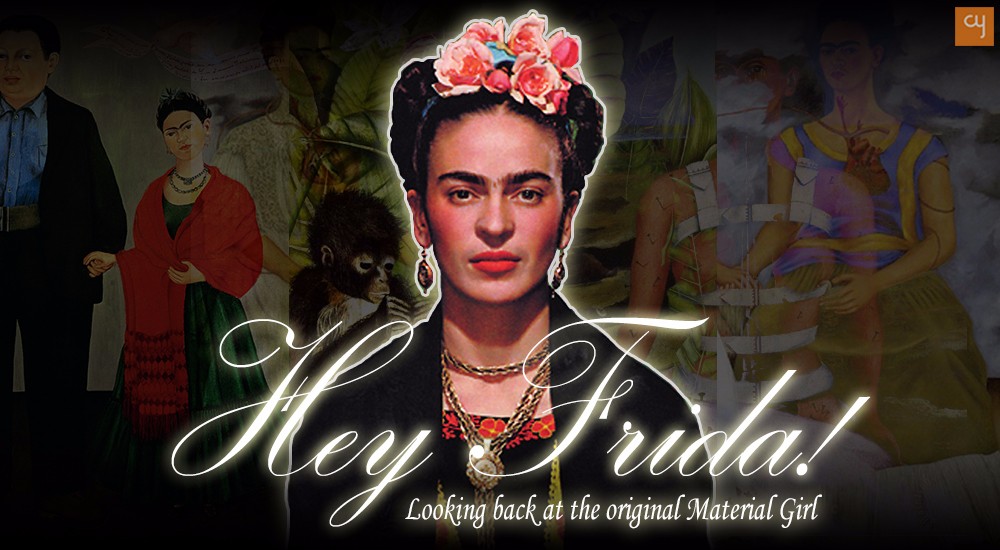 Frida Kahlo’s art and personality are potent illustrations of matter trend. This piece is an observation upon how Kahlo’s progress and effect from early twentieth-century Mexico City became critical aspects in her forming her persona as an independent artist and celebrity.While many considered her a surrealist, Kahlo never identified herself as one. From her unibrow, her floret decorated hairstyles and her nowcharacteristic aesthetics, Kahlo unintentionally generated an interest in both her personal life as well as artistic career. Her oeuvre was composed of a substantial set of self-portraiture and was immeasurably autobiographical. It focussed on her Mexican-ness (Mexicanidad) and the culture of her homeland(Patria) that she so ever loved.

It looks completely legitimate that the first artwork right away works on her connection with her two-time, much older husband Diego Rivera. Outshining his artistic productivity in her life span, she possibly now embraces larger global acknowledgment than he ever did. This article conceivably reflects her inconsistent affection for him; by amplifying her small built and size in correlation to Rivera, she arguably expresses her reliance on him, simultaneously the self-depreciating artistic talent by showing Rivera clutching paintbrushes while wearing a sober campesina outfit.

This self-portrait of Kahlo is governed by her rather mystifying gaze. She stares out of the frame and directly into the eyes of the viewer. Adorned in a crown of thorns, wore more like a necklace in a scene of self-inflicted pain. Many people read it as a tragic representation of her divorce from Rivera. The image is further complicated with the visual of a dead hummingbird, symbolic of her bruised love that hangs from her necklace and the ill omens of the malevolent black cat and immodest spider monkey that lurks on her shoulders. This is one of the most iconic “Frida” images, referred to often and used extensively in pop culture.

Kahlo’s early life was dominated by trouble. She suffered from a crippling illnesses in her childhood and later a bus accident which left her in a spinal brace at a young age of 18. These images became autobiographical material for her art. The influence is particularly clear in this piece and is from the metal frame she had to wear during her gruelling recovery from the broken spine. It depicts her naked torso trapped in a steel structure that supports her body frame for which the painting is named. Nails stick out from all over her entire body, including one which appears directly above her heart. There is a certain romanticism to the brutality the picture in many ways embodies.

This one has to be Kahlo’s most famous and recognizable painting owing to the sheer popularity it has enjoyed over the past few decades. Las dos Fridas is a split self portrait that reflects the impact of her separation from husband Rivera. The aftermath of which is expressed in the loss of identity or atleast the sense of it. The Frida illustrated on the right is European in attire and looks, alike how she was before she met Rivera, whilst the Frida showed on the left is specifically conventional Mexican. Left hand Frida, the ‘self’ she made throughout her marriage, is the one that holds jewellery consist a picture of husband Rivera. The bleeding heart is undeniably symbolic of her pain, as well as being symbolic of Aztec ritual sacrifice.