Oral literature – the original form of folk literature– has significantly shaped the spoken word culture of today. The form has thrived around the globe since eons, be it through locally-preserved bed time stories, or through devotional songs (Prabhatiya) written by Narsinh Mehta that are sung by millions of Gujaratis in the morning, or through competitive verse compositions of the Argentinians that are known as Payada.

Contemporary initiatives like the Human Library Organisation, through which people can hear stories first-hand from other human beings instead of referring to a paperback or audiobook, have enormously magnified the value of contemporary orature. One contemporary personality who has been striving to save oral literature is Bhagwandas Patel who has, since four decades, been working to preserve the orature of the indigenous tribes of Bheel.

Bheel is the largest tribal community in India. The community resides primarily in the western zone of the nation, although a significant number of these Scheduled Tribals also reside in the eastern part of India and in Sindh, Pakistan. They are known for their famous ritualistic murals called as Pithora and for Gavari, their dance-drama form of performance art. Patel did not grow up anywhere near the vicinity of the Bheel community, nor was he ever exposed to their culture. Recounting what inspired him to devote his studies to the Bheel community, he explained, “In my tender years, while travelling in the wee hours of the morning, I happened to bump into a Bheel family that would later save my life during a flash flood. This crystallising experience inspired in me the wish to dedicate my entire life to the native tribes of India.” Patel’s sheer persistence in uplifting the tribe’s conditions has connected him with the community intimately over the years.

The literature revivalist was invited jointly by Matrubhasha Abhiyan, Gujarat Literature Festival (GLF), Kanoria Centre for Arts and Creative Yatra to deliver a discourse at the monthly talk series of Paraspar on March 16 at the Kanoria Centre For Arts. In its seventh edition, Paraspar’s topic of discussion was called ‘Bheel Adivasio Na Pranay Geeto‘ (Love Songs of Bhil Adivasi Community). The words flowing out of Bhagwandas Patel’s mouth were as tranquil as a clear-water stream. Narrating original love songs and verses written by the women of the Bheel community, the septuagenarian transported the audience into a dreamlike journey. He explained, “All the love poems of the Bheel community are written by women, which goes to show how liberal their community is regarding the freedom of expression.”Through more than 1500 cassette recordings, Patel has archived various songs sung by the Bheel community – ranging from themes like marriage and love, to devotion. He explained the verses by converting them into vernacular Gujarati. 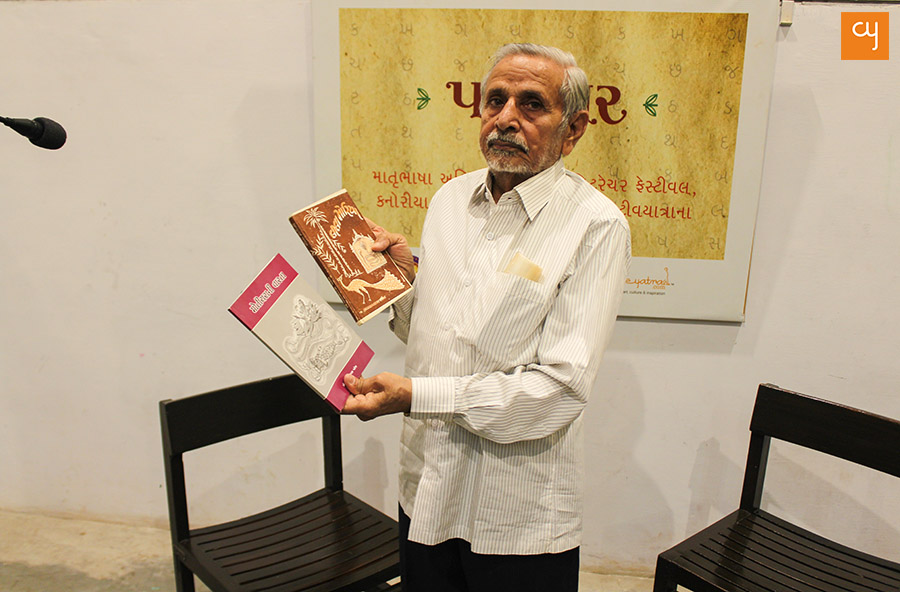 Patel hails from a family of farmers in Jamla, Sabarkantha. Inclined towards academics since a young age, he pursued his Bachelors and Masters in Arts and later opted for a Masters in Philosophy on the tribal songs of the Bheel community. He is the only person to have achieved a PhD through writing research essays on the culture and literature of the Bheel community. He has authored over 50 books dedicated to the Bheel tribes of India so far. He is associated with the Adivasi Academy and has, till now, helped people from over 800 villages to develop in education and various other fields. As a social reformist, Patel has successfully abolished the infamous ‘Dakan Pratha’, a heinous procedure in rural India whereby women, who are assumed to be possessed by paranormal entities, are physically tortured by villagers.

Patel continues to heartily dedicate his time to the service of the native communities. The informational Paraspar series of Ahmedabad has invited various other local luminaries from the creative fraternity of Ahmedabad to give talks before this, including photographer Vivek Desai, poet Miskin, author Ratilal Borisagar, veteran radio Jockey Aarti Patel and exponent of positive journalism Ramesh Tanna. This seventh edition of Paraspar exposed the urbanised crowd of Ahmedabad to a beautiful oral form of literature, through the stirring narrations of Bhagwandas Patel.