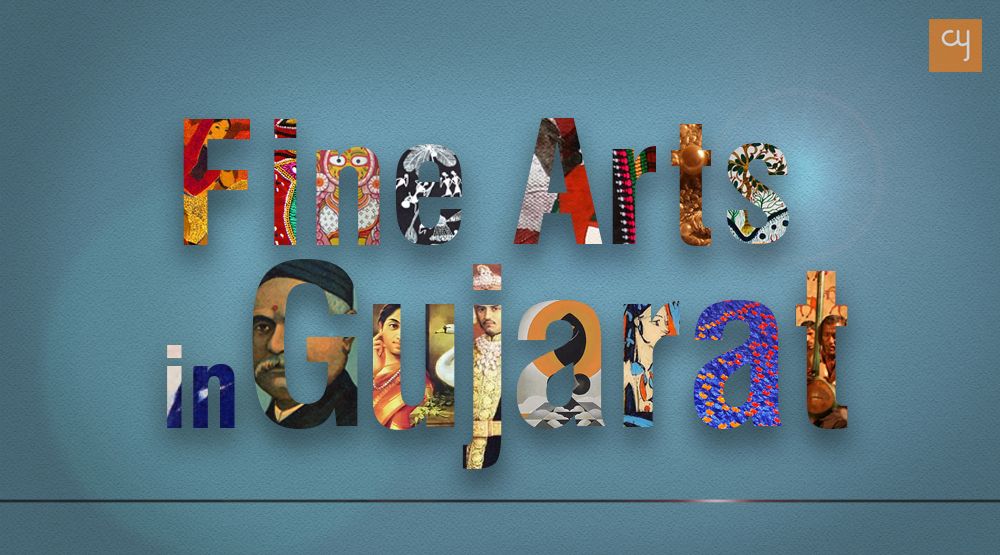 Gujarat has had a very peculiar relationship with the arts, one that is based on curiosity, diversity and collective learning. The state altogether, since centuries now has developed its own aesthetic experience spanning visual arts, architecture and literature developing its own intrinsic aesthetics. Gujarat has held a unique character in with its oral and visual arts, creating a rather hybrid or synthesized (for choice of a better word) arrangement keeping these aesthetics at it’s a heart. Known for a series of age-old traditions inclusive of dyeing, printing, bead and mirror work; painting traditions such as Pithora and Warli; Bandhinis and Patolas, Kutchi weave work and Chikankari at large have dominated the domestic art/craft domain. It is interesting how beauty meets a very sharp sense of functionality in Gujarati artistic traditions, which also probably explains the growth of a state as a culturally vibrant one. Take for the examples the ornate Pols of Ahmedabad, that bring together marvels of art blended with architecture with a ‘before its time’ understanding of climate, temperature and housing systems. Pithora painting, on the other hand has been practiced by the Rathwa community men and has its roots in nearly thousands year old cave paintings. This central Gujarat tradition is rustic and crude in its approach and execution. Devotional greatly, Pithora is created in order to pay homage to God and pray for one’s wishes to come true. According to the custom, three walls and veranda (pithoro) of a house are coloured with extreme festivity and merriment.

Looking back at painting traditions from the annals of antiquity, there existed around the tenth to eleventh century, a hand produced folio of palm-leaf handwritten document chapters of Jain scriptures. These were complete with artistic imagery mutually on both the folios including its hard wood cover. As far as sculpture is concerned, Gujarat has had an early tryst with stone carving. In fact stone and wood have forever been preferred mediums of sculptural expression.

The growing prosperity of the Jain community in the west, who largely functioned as trade merchants and bankers also echoed a similar origin of the arts like that in the Roman empire – one that was based on commissions and public endeavours. The humble origins of the Gujarati Public sculptures are seen in these metal-based commissions. This spread to the institutional building of large temple complexes (an endeavour that soon spread and also increased in terms of number of commissions). With the temples there was also a significant rise in the production of images and other objects associated with ritual and worship. Looking back at the painted scripture, even today the worship of the Kalpasutra manuscript forms an important part of the annual Paryushana festival celebrated by the Svetambara Jains during monsoons. In the 15th and late 16th centuries, the Sultanate and Mughals further promoted the art of miniature painting in the Gujarat. The Islamic paintings depict some of the finest religious forms of the state. These paintings were not restricted to Islamic motifs but also used a lot of Jain and Hindu influences.

Present day Fine Arts in the state of Gujarat finds heart in the capital of culture – the city of Vadodara. Vadodara is renowned for its affluent legacy, fine arts, theatricals, awestruck architecture, hard-working people and academic foundation. It houses the magnificent structures created during the Gaekwad rule, most of which stand in the beautiful Indo-Sarcenic style (the Lukshmi Vilas Palace being a premier and world renowned example). The development of the city-state can be largely attributed to the Gaekwads as well, especially the visionary Sir Sayajirao Gaekwad III.

In 1881, the Maharaja Sayajirao Gaekwad III invited the celebrated Indian artist Raja Ravi Varma to their kingdom, Baroda. Activities accelerated with the arrival of the famous Raja Ravi Varma, who trained under the renowned Theodore Jenson. He brought along with himself the Western Academic style and largely worked with oil. In addition of custom-built paintings of Maharaja Gaekwad III, he shaped quite a few other canvases while his stay contributing to a large collection of his works in the Gaekwad court. His trip is commonly recognized behing the making of The Baroda Museum with the support of Maharaja Sayajirao, which started constructing in 1887 and finished during 1894. During the era of 1903 to 1904, the king and the newly appointed museum director, Mr. A.M. Masani, explored the museums and art galleries of European countries and bought in surplus of 20 rare works of art plus various other artistic objects.

Counted in some of the oldest learning Centres of western part of India, The Baroda College, included the Faculty of Fine Arts. With the visionary vice-chancellor of the new academy, Hansa Mehta a new initiative was drawn. Mehta, supported a liberal educational environment, where productive meetings and open-minded dialogues would guarantee a complete rational dialogue and collective growth. This was the tenet that largely contributed to the ethos of this fine arts school. The help for settling up the Faculty of Fine Arts was asked to do by Markand Bhatt from the Barnes Foundation in Philadelphia. Major creative personalities from Indian art fraternity were requested to be a part of the new project in multiple aspects. Including K.K. Hebbar, V.P. Karmarkar and the renowned Indianologist Hermann Goetz. Other beings who were in the earlier days involved with the new faculty were N. S. Bendre, K.G. Subramanyan, Sankho Chaudhary, Gulammohammed Sheikh, Nilima Sheikh, Nasreen Mohamedi and Dhruv Mistry. In a few years the Faculty of Fine Arts, MSU Baroda, transformed as the second name for modernist art exercises and experimentation, establishing itself as a post independence liberal school in India. In 1956 “The Baroda Group” integrated phenomenal artists like N.S. Bendre, Jyoti Bhatt, Prafull Dave, Shanti Dave, and K.G. Subramanyan, organized their very first art show in Bombay. The Baroda Group thrived with shows which gained awareness throughout India and even in the western countries. The faculty has since been the cradle of Indian Contemporary Art, producing some of the finest exponents such as Dadasaheb Phalke, Latika Katt, Haku Shah, Jyoti Bhatt, N.N. Rimzon, Laxma Goud, Pushpamala N. and Vivan Sundaram.