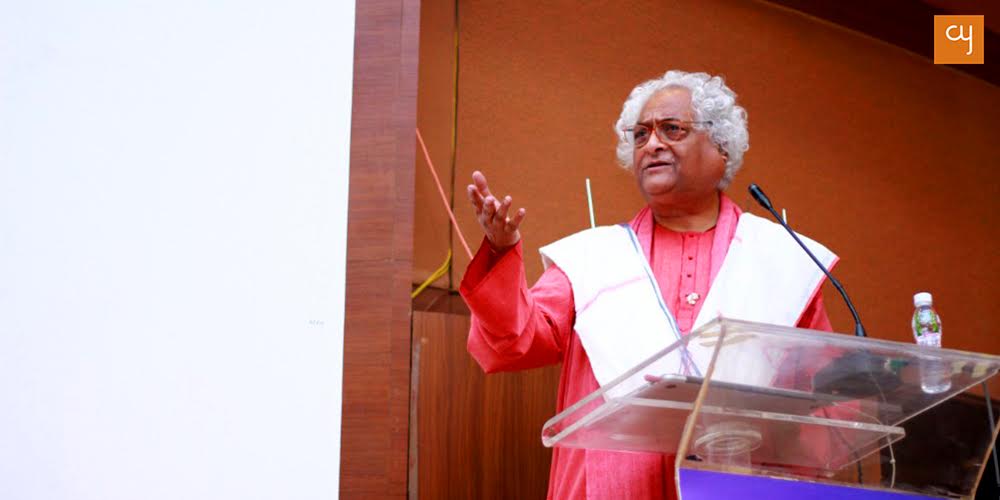 Esteemed Indian designer, scenographer and art curator Rajeev Sethi has been serving marginalised as well as urbanised sector with his innovative designs for decades. During his lecture at India Design Confluence, he addressed budding designers & artists and explained on how the richness of Indian design can be harnessed by simple observation and sensitivity.

“Whatever Rajeev chooses to regret at the end of his life, lack of coherence in his work would not be among them. Rather, he is someone who has moved effortlessly from one discipline to other,” senior journalist Preeti Das who carried out the honours of introducing Padma Bhushan recipient Rajeev Sethi, used the above quote, aptly, to set the tone for a satiating session on design thinking that was to follow.

Sethi, a noted designer, is known world over for his aesthetic sensibilities and is the creative mind behind the 80,000 sq.ft magnum opus ‘Jaya He Art Walk’ at the Mumbai, T2 Airport terminal. He was in Ahmedabad to speak at the first edition of India Design Confluence, an initiative by Craftroots, which seeks to explore design solutions for the making of a new and vibrant India. The unending round of applause, that Sethi received upon his introduction, was befitting to say the least. The highly decorated designer, Sethi, started his early days working with one of the most significant printmaker of the 20th century — Stanley William Hayter. The proud son of a freedom fighter couple has formerly worked alongside modern American architect and furniture designer couple Charles and Ray Eames and French designer Pierre Cardin. The Gandhians who moulded most of his aesthetical life after returning to India includes fast friends and mentors like theatre actress, reformist and freedom fighter Kamaladevi Chattopadhyay, cultural activist and writer Pupul Jayakar, co-founder of the National Institute of Design Gira Sarabhai, and founder of the Self-Employed Women’s Association Ela Bhatt.

Rajeev Sethi, who has been honoured with an Order of Merit of the Federal Republic of Germany, is also the founder of Asian Heritage Foundation and has been a fervent preserver of the Indian handicrafts and traditional aesthetics. As a dynamic personality, on the one hand, he has worked with various marginalised artisan communities and vulnerable cultural stakeholders of Asia at grassroots. He has been associated with Louis Vuitton India to make its designs more Indianised, and curated art for the residence of entrepreneur Gautam Adani in Ahmedabad.

The warm and thunderous applause, preceded a silence of expectant air, and it was rightfully reciprocated by Sethi, as he made an engaging presentation titled ‘Seeds of growth’, which is a conclusion of his vast experience in the field of design. It was a golden opportunity for students, designers in-the-making and artists to listen to the design maestro who shared key guidelines and recommendations for creative growth based on his experience.

‘Seeds of growth’ encapsulates 16 cohesive points, which in Sethi’s experience are the key to development of creativity. Sethi was both extempore and structured in presenting his thoughts. Below is the summary of the presentation, narrowed down to 10 ‘seeds’. For any creative person, belonging to any faculty of design, these can give them lot of insight.

As a designer one needs to guard one’s ideas and keep them safe. It is important to nurture tolerance and patience, as results are not always as desired. To realise a dream project one has to learn the way to communicate them fearlessly. Sethi shared, “There is no set mantra for achieving a great design. You throw yourself in a deep end, and you learn to swim better. Whenever in a difficult position, I rely heavily on the inventiveness of the group energy.”

Here Sethi discussed the ability of ‘change’ to augment the quality of design. He also shares now one should remain wary of imitation and constantly strive to be original. He puts it wonderfully well in his speech, “The truth of tradition is a creative capacity to absorb change, further or just bypass. The DNA of change is ingrained in you. Motion is the symbol of life (Harkat Mein Barkat). But while transforming, we must inform ourselves about the difference between derivative and original. Imitation can only mean mediocrity.”

“Celebrate and worship quality. The identity will grow steadily with consistency of quality. Take example of different types of old nutcrackers. Each curve and cut had its own qualitatively original symbol.” Sethi shared that he has a collection of 108 different shapes, size and designs of brooms;  to emphasize how the simplest and ordinary things can be utterly unique in quality. “Don’t let the industrialisation consume your identity, as it did with the indigenous lota (earthen pot) design. ” he quips to remark on the death of traditional knowledge-based design thinking in our country.

Here Sethi makes a strong point of inclusiveness in design. Continuing from his earlier remarks of bridging the gap of tradition and modern he explained “It’s probably not right if, by any means, our work renders us jobless, voiceless, ruthless, rootless or futureless. There has to be a gifting process in the economy. It is not a good design if it is curbing equitable and judicious distribution of opportunities. The weavers of Chellampatti abandoned their original place in search of livelihood and shifted to the urban metropolis of Delhi. Today these weavers, well versed with a textile art that made India historically famous and rich with its first great export, are selling balloons, vegetables, shifting garbage in cities.”

Handicraft has been and still is a strength of India. Rapid industrialisation and urbanisation have reduced the social status of these generational artisans. It is imperative for design leaders of the nation to value this asset of India and imbibe it in modern design thinking. Sethi emphasised this by making a strong and brutal point, “Handicrafts have to be valued. Imagine what if the hands that weave and make art beg or worst, pull triggers due to unemployment.”

Sethi made a significant point on how design thinking is imbibed in each one, often at the most unexpected places, and it is the ability to observe and learn from the ordinary, which leads to creation of extraordinary. In his own workds, “We have all witnessed spectacular designs made by self-taught common people. The truck art of northern India or a scarecrow made by a farmer from a bird’s perspective, who would aerially watch a woman working in the field, is a spectacular example of anonymous genius. The dabbawalas who are hardly high school graduates accurately deliver warm food to thousands of people only through an inventive signage method.”

Be curious and tentative

Many times designers become take ‘confidence’ as the only virtue and lose vulnerability. Sethi says for him being tentative is good. He says “Confidence is good, but self-doubt is even better.” Self-doubt, not in a negative way, but to nudge one towards deeper observation can lead to enhanced self-learning.

Sethi’s Gandhian influence becomes apparent as he discusses this ‘seed’ or point with the audience. He expresses, “As a designer doing more with less is essential, just like your mother makes the best out of bare minimum resources. Mahatma Gandhi awakened his feminine energy through a charkha and organic fibre, and was amongst the best designers ever lived. Let’s not look down at the technology of ‘Jugaad‘ (hack) because true learning can only happen when you rise to the occasion.”

The age-old dictum of one is as good as the company one keeps, also holds true in matters of design thinking. Sethi whose oeuvre consists of unmatchable variety and scale – ranging from ‘Hampi Resort’ and the ‘Spice Route’ restaurant, to VIP Lounge at Delhi Airport and the massive Terminal 2 at Mumbai airport – is forthright in acknowledging the importance of ‘sangat‘ (company). He explains deeply, “Company matters. One has to identify passionate stakeholders for interdisciplinary collaborations. Or to say, slightly mad people. Use minimal digital communications and prefer talking one-to-one. Group activity, transitions through teamwork, collective learning and catharsis increases the scope of spontaneity and improvisation in design.” Wise words from the experienced man.

It is so heartening to see a highly decorated person talk about the softer, emotional aspects of life, which actually influence design a lot. In his point, Sethi explained “Never underestimate the power of intangible. Every inspiration and thought germinates in the brain was something intangible at the first place. One cannot see the hidden red colour in the leaves of Henna nor can one know how the elephants predicted the 2004 tsunamis and reached higher grounds to save themselves.”

The presentation was positively perceived by hopeful students, who learnt to be anything but restrictive as a designer. Sethi who was fervent about using handcrafted textiles and traditional arts maximum as a designer also told the audience to adapt digital means of art. His overall lecture explained us to remain humble and be open to change and work to not let deviate from the roots.