Be it Carnatic singers humming to Ed Sheeran’s Shape of You or Sia’s Cheap Thrills, IndianRaga has found a novel way to integrate classical genres with contemporary styles. After stupendous response in the US, RagaLab in Mumbai is set to open up opportunities for Indian Classical students to get attuned with the syntax of new age performing arts.

One of my friends accompanied me recently to a night club, where we hit the dance floor on Sia’s chart-topper Cheap Thrills. On our way back home in the car, he tagged me on a Facebook video – a notification that, I would say, transformed my perspective towards Indian classical music forever. The video featured a group of prodigy Carnatic singers who had developed a classical version of Cheap Thrills and were setting the Internet on fire with their creation. It was later that I discovered that this fusion was a product of IndianRaga and simultaneously realised that Indian classical music, especially Carnatic music, could be uber cool and contemporary while maintaining its aesthetics.

IndianRaga –a thriving community of Indian classical and folk music adorers – is exponentially expanding through its educational programs. The group helps performing art enthusiasts to mobilise and get trained under aficionados of Carnatic music, Hindustani classical music and contemporary music. Moreover, it conducts trainings in Bharatnatyam, Kuchipudi, Kathak, Mohiniattam, Odissi and other Indian folk dance genres, either online or at one of its sophisticated, yet traditionally equipped, studios called Raga Labs, stationed in both the USA and India. IndianRaga’s innovative initiative to build a community of like-minded musicians and provide them with a public presence through online footages has been honoured with various accolades, including the MIT IDEAS Global Challenge and US Creative Business Cup 2012. IndianRaga’s brand new upload on its YouTube channel, where three Carnatic singers are seen humming Ed Sheeran’s hit single Shape of You, with a Carnatic touch, has already hit half a million views. The organisation was founded at Massachusetts Institute of Technology by Sriram Emani, in association with Sukhada Fadnavis and Anasuya Mandal. Since we at CreativeYatra love to explore enriching initiatives across the globe, we grabbed an opportunity to connect with Emani, who is also formally trained in Carnatic music, and asked him a few questions about his life and the making of Indian Raga.

How were you inspired to develop the IndianRaga initiative? Did you feel a need to develop a community of Carnatic music aficionados in the USA?

The inspiration to do something in performing arts has been there for many years now. When I look back and think about my time in school, the memories that come back to me are of being backstage. I was part of music, theater and all the performing arts, and I genuinely believe that the most valuable skill sets and qualities that make me who I am today, came to me through my experiences in the arts – the first time I worked in a team, the first time I was on stage, the first time I had to focus on really perfecting something, the first time I had to think about presentation and confidence. So the fact that such a valuable source of learning has become secondary to engineering and medicine bothered me, and I’ve always wanted to do something to make it part and parcel of everyone’s lives, especially those of young kids.

Growing up in a non-business family, I had never thought of becoming an entrepreneur. In fact, doing something like IndianRaga was my retirement plan initially. But when you go to a place like MIT, where everyone is so passionately pursuing what they love, you cannot help but get fired up to pursue your ideas here and now, instead of waiting for later. At MIT, I was regularly involved in discussions on new business models, on starting companies, on marketing. Very soon after my plan of activities for IndianRaga at an MIT Media Lab class won a bunch of awards, I incorporated the company.

I wish to dedicate my life to the advancement of the performing arts, and I am glad that IndianRaga has been a strong channel to invest my energy and passion in. We have started with Carnatic because of my training in it but we are rapidly expanding to all genres.  Hindustani classical, Carnatic classical, folk, semi classical, and contemporary genres of music – and then also Bharatanatyam, Kuchipudi, Kathak, Mohiniattam, Odissi and folk dances – basically all Indian genres shall be explored by IndianRaga.

What is your Carnatic Music story? Why are you so extensively involved in this genre of music?

I was trained in Carnatic vocal music for more than ten years. So it was my deep passion and determination that ensured that, when most people stopped all other activities during their 10th and 12th grades to prepare for the public exams, I continued my weekly lessons. Even during my IIT days, I remember that every Friday night I would wrap up my assignments and cultural activities (I was very active on the campus, in the scene of students’ activities) and leave on my bike at 2 am to reach home around 3 am. I would wake up in the morning to go for Carnatic music class, and then return to IIT after. I think learning music has added a precious dimension to my personality, and I cherish my continued engagement with it.

In addition to Carnatic music, I also trained for a few years in Hindustani classical vocals, and later also in some western music lessons in New York, just to understand how different styles of music train students in various ways. These experiences lent me more perspective on how we can bring together strengths from different training styles and enrich classical pedagogy.

When I was 20, I received some offers to record professionally for movie songs and independent composers. While I was recording in the studio, I realized that my classical training has given me strong foundation, vocal strength and projection -these made it easier for me to render any style of song powerfully. However, it also made me realise the reality that contemporary music requires some additional skills such as vocal dynamics, use of head and chest voice, emotional impact and other new-age nuances that I needed to develop further. One of the key things we offer in IndianRaga is an awareness and training in these techniques that many students of classical music do not get in their training. 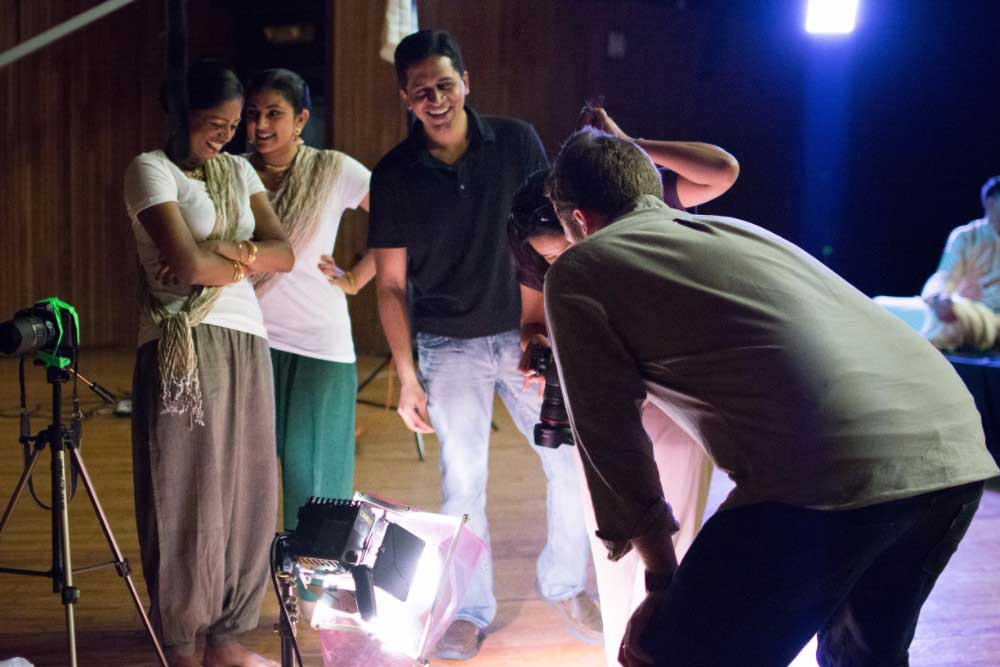 How do you find an audience in a western country that is interested in the eastern music of southern India?

To be honest, it was easier to get started in a western country. The Indian diaspora in the United States is incredibly passionate about Indian classical arts and immediately latched on to our projects. Performing arts are an integral part of every child’s growth and development here, and contributes immensely to their personality. I think Indian classical arts are thriving and flourishing in the USA. Iconic brands like Lincoln Center and Chicago Cultural Center have noticed the quality and standard of the work that we produce and invited us to perform to a diverse, global audience that soaked up the Carnatic ragas we presented and was eager to learn more. It has been very fulfilling to present this music here in the diverse and thriving arts ecosystems of North America.

Of course, we combine this with a targeted advertising approach on social media, to reach out specifically to those who express an interest in this art form. Using technology to effectively reach out to the right audiences online has helped us develop a strong, loyal following that reaches out to us, enabling us to launch projects in over 40 cities. Moreover, the high quality of audio and video production, and the short form video formats, make it easier for people to stay connected and engage with our music whenever they have time. In fact, most of our audience plays our music during their commute, or when they take short breaks so that they can stay tuned into it without having to take out 3-4 hours at a stretch, which is nearly impossible in today’s fast-paced world.

How has your initial response been at the IndianRaga Labs in India?

I had to reschedule my return trip to the USA to cater to the booming demand for Raga Labs in Mumbai. We were unable to launch in Delhi, Bangalore and Pune, despite high demand, because we wanted to stay focused on one city and do justice to the immense talent that reached out from there and signed up for over 5 Raga Labs in a span of two weeks, which is our highest ever in such a short time. We have also launched the IndianRaga Fellowship in India as a limited edition version this year, and applications have started pouring in from various corners of the country. We are currently trying to ensure that every deserving artist across the country gets to know about it and has a shot at applying before the deadline on June 30, 2017.

What is fascinating about the demand in India is that there is interest not only in core classical music but also in collaborative work. Some classical dancers are looking to blend their work with semi-classical or western classical dance forms, and Carnatic musicians are looking to collaborate using jazz and pop styles. Even more so than the Indian diaspora community, it is the core classical community in India that is seeking to collaborate across genres to express new themes, influences and trends that the current generation is experiencing in mainland India.

Any faculty or tradition – be it art, commerce or science – is influenced by time, and has its relevance dependent on contextual limitations. Yes a lot is considered ‘absolute’, but we have seen even scientific theories going through evolution and a process of up-gradation. Sriram’s efforts through IndianRaga are definite acts that are acting as the stepping stones towards a sustained process of re-interpretation. The reception of the Lab in India, will prove to be a significant marker in the story of Indian Raga.