Busking By Night, Corporate by Day. 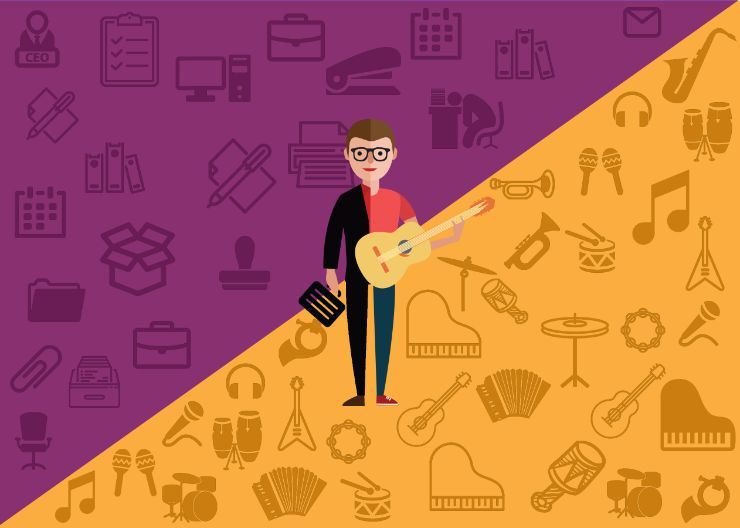 What do we need to do to serve our purpose in this life? Relinquish our desires for sustenance? Lose ourselves in the daily clichés of what we know as the rat race? It might not be this grim; because with a will and a few management skills, we can do what we want and can live how we want.

Ronee at first glance is an affable person, with a Calcutta intellectual and scruffy beard and long sharp nails. The nails, however, are the things that make him very unique. He is a classical guitar player par excellence; he is also a 9 to 7 guy working at one of the biggest companies in the world, Amazon. Ronee is what you might call an old soul trapped in a hectic corporate’s body. If you happen to look at his facebook profile, all you would see is links to legendary musicians like Lenny Breau to Bach. He also loves to play in the streets, take his music to the masses. When he started busking or in common parlance playing in the streets of Calcutta, it was somewhat a mixed experience. In India, we seldom look at spontaneous public displays of performance with suspicion if they are not traditional. Ronee, while playing in the famous area of Park Street, Kolkata, mentions, that local ruffians and the police have accosted several times him and his fellow musicians. He mentions, ‘in both cities we were heckled by police. But in Bangalore, there’s a community called Busking Bandits. They provide a platform for the buskers and brings them under one roof. In Kolkata, busking as a concept dabbles in obscurity, whereas in Bangalore it’s becoming more and more popular’.

This busking collective organises different musicians to play in different areas of Bangalore, especially in places like Cubbon Park and M G Road Boulevard. With proper permits, the buskers have a time of their lives and enliven the daily routines of people passing these places with their music. Ronee says, that people are quite attracted to busking in Bangalore and they love both classical and jazz tunes with occasional requests for evergreen Bollywood numbers. He says: ‘It’s good here. sometimes you get odd requests like ‘play some Kishore songs and all that’..but people do listen’… The busking also leads to a lot of opportunities for young musicians. Through these gigs in the open, they get recognised by different cross sections of people frequenting the live music scene in Bangalore and these people request for the buskers. One must see that things are getting a bit better for independent musicians who have to have a day job to secure their passion.

For details on busking in Bangalore: https://www.facebook.com/buskingbandits/?fref=ts