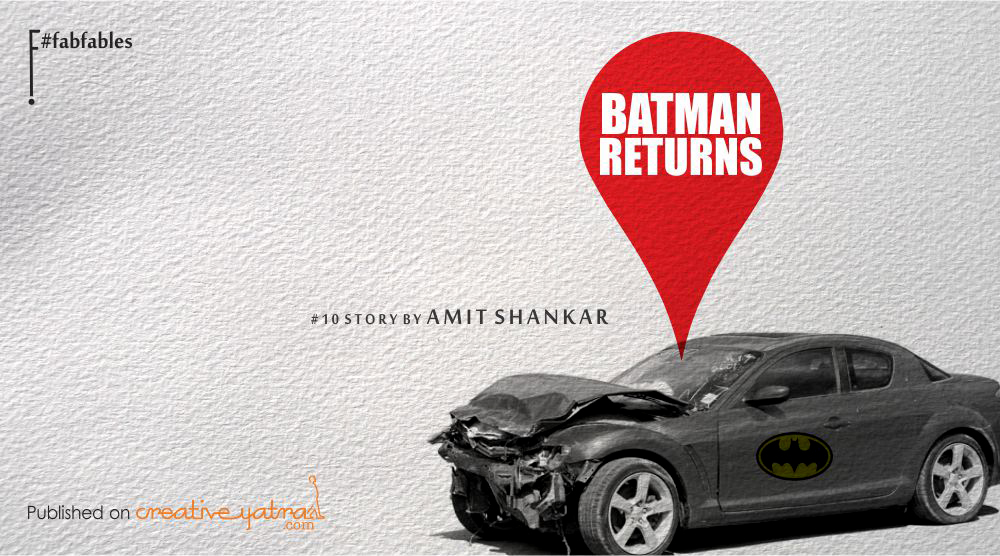 He could not see any reason for the huge congestion that had been paralyzing the entire afternoon traffic. It was June—the month which put even hell to shame. Scorching Sun at 45 to 47 degree, a nebulous blanket of sand particles hanging over the skyline of Gurgaon, thousands of call center cabs idling and emitting life threatening fumes and the never ending construction, to name a few.

As he walked up ahead, he hated himself for putting on the black batman tee. Using a rubber band, he tied his long hair. There was a cab almost reduced to the size of shoebox by a construction truck that would have taken a wrong turn. Blood and the remains of the window pain and car lights dotted the road. Cops, para medics were busy with their routine task, so were onlookers.

He walked away from the morbid scene, seeking some respite from the sweat, dust and toxic air.  As out of nowhere, his eyes caught sight of a billboard on to the façade of the mall on to his right hand side—Divine Spa and Salon. Why not try a spa, he thought. After all, he was walking out of his apartment after seven long days. Now with no trace of the viral infection, he was feeling better.

As he stepped in, the air conditioners made him realize how badly he needed it. Like any other day, he was clear on the plan of action—facial, pedicure and a haircut. For long, he had been itching to try the new crew cut that was in vogue. He had convinced him self by telling that being a writer did not make it compulsory for him to sport long hair.

As he checked in for a new look, he was feeling excited about it. Surrendering to the comfort of the luxurious leather upholstered chair, he felt so much better. An attendant in white tee, trouser greeted him while the other sat near his feet. The air conditioner was bust soothing his every pore.

Cold cream and hot water welcomed his face and feet.

Every pore was being pampered and he loved every bit if it. Finding it hard to fight the laziness, without any effort, he slipped into a subconscious state.

“Sir, I have put on the face pack. It needs to stay on for twenty minutes.”

The voice of the attendant brought him back.

His wanted to open his eyes but couldn’t as they felt so heavy.

“Sir, don’t move, there are herbal cotton bags on your eyes. “

“Oh, what about the pedicure?” he enquired.

His restless side was getting active.

‘Do you mind if I get a hair cut in the meanwhile?”

“But sir, you have face mask all over you face.”

“That is fine. In any case it has to be washed. I can’t even open my eyes or else I would have read something. So let me utilize the time.”

“Listen dude, please guide me to the hair cutting section. I will sit there the same way I am sitting here, with eyes closed.”

With cotton swabs covering his eyes, facemask his face, he walked towards the hair cutting section, holding the attendant’s hand.  He helped him lower himself into another comfortable chair.

“It’s time for them to go. Cut them real short. It is too hot. Can’t carry them anymore.”

“Oh.” He came out of his slumber. “Was I snoring?” He enquired sheepishly.

He felt relieved. Snoring at unknown places, airplanes, trains, relative’s place embarrassed him to no end.

“Sir, just give me a minute, let me get a mirror so that you can see the back side of your head too.”

As the hair stylist left, he strained his neck and flexed his feet.  He felt so much better.

“Sir, have a look.” The attendant was back, holding a mirror. He removed the cotton swabs from his eyes and looked in the mirror being held by the stylist. He could see the mirror, but could not see the reflection of his head. He moved to his right. Still the same.

“Could you move a little to the left?” He instructed the stylist.

He looked again. The mirror had moved but still there was no reflection. What was wrong, he cursed and looked in the mirror mounted on the table, right in front of him. He could not believe what he saw or what he couldn’t.

He was sitting right there, in front of the big mirror, but he could not see himself. Confused, he looked at the hair stylist. Dressed in white tee and trouser, he stood there, smiling, holding the mirror. He looked in the mirror for his reflection. None.

The cops watched as the paramedics, heaved two bodies in the ambulance—one of the cab driver, second of the pedestrian who was hurt while crossing the road. The truck driver was absconding. The pedestrian’s body had long hair and was in a black Batman tee.