12 distinctive festivals of India one must visit before dying ! 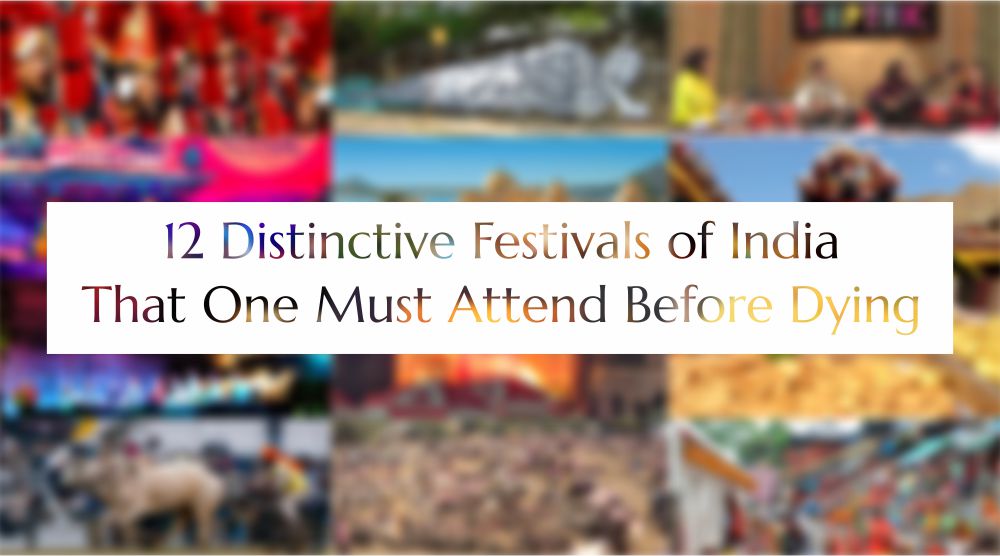 India a land of festivity with more than 1599 languages, 3000 castes, and 25,000 subcastes; the country has a variety of people blending with each other through various means. And the celebration of a festival is one of the most pleasant ways of amalgamating within one’s custom. But did you know that across India there are such interesting celebrations, gathering, and festivals that not much people are aware of. Team Creative Yatra handpicks a few contemporary as well as traditional festivities and brings to you 12 such festivals of India that will leave you awestruck with their method of celebration…

For details of each Festival, continue reading…

Hornbill Festival, Nagaland:
Celebrated in the first week of December in Nagaland the Hornbill Festival is dedicated to one of the greatest skills of mankind, agriculture.  Within this week-long festival, there are dedicated flea markets with some spectacular flowers, vegetation, food, artifacts and jewelry on sale. The Naga people sing folk songs, perform tradition dances and play indigenous games. The festival comes alive at night with the showcase of a contemporary rock concert named ‘Hornbill International Rock Festival’. Thousands of tourists across the globe come to see the celebration of Nagaland. And did I tell you that the festival has a major significance of the Hornbill bird?

Kochi-Muziris Biennale:
An International exhibition of contemporary art that accrued more than 250,000 visitors in its 6 days span has some of the most fabulous art pieces displayed by the best artists of not only India but across the globe. With a humble motive of uplifting culture and art infrastructure and to broaden public access to art across India, the Koch Biennale Foundation is today one of the most grandeur Biennale of the globe.

Saptak, Ahmedabad:
A thirteen-day classical music festival held every year in Ahmedabad is one of the longest Indian classical music festival held successively. Since its inception in 1980, the Saptak which was earlier a one-day event, now has turned into a fortnight long Indian Classical Music festival that brings the rising stars and the stalwarts on the same stage in front of the same audience. Initiated by Nandan Mehta the festival in its current form, not only includes classical music but has expanded its reach into folk music, classical dance forms, and semi-classical forms. Saptak is basically a school of classical music and the annual event is a platform for students to learn from masters as the get together to perform live.

The Great Indian Literary Festival (TGILF), Udaipur:
Still to unveil its maiden edition, TGILF promises to be a one of its kind literary festival that the country has ever hosted. TGILF’s main attraction is to fuse its line up of  dedicated panelists and honorary guests from literature, popular culture, politics, and others with contemporaries of regional literature. While most LitFests today talk in English, TGILF throws promise of being a unique hub where Indian literature in Indian language will be brought to fore.  The Festival curators are looking to connect the regional with global by forming International Chapters to take this movement to various corners of the globe. A literature head must visit this enthusiastic festival this March 2017. And hey, its being held in the city of lakes, Udaipur, an additional  reason to reserve dates for this one.

Udaipur World Music Festival (UMF), Udaipur
Within the grandeur of the city of Udaipur, known as Venice of the East, every year people celebrate and worship music as their almighty. But the best part is that it is not only the folk but the amalgamation of more than 100 artists coming from countries including Spain, Ghana, Venezuela, Italy, France, India and many others. Dancing in varied genres has its own charm that one may experience purely at the UWMF. The event was held for the first time in 2016 and is expected to take place every year on the same timeline. The lineup is already out, explore more here.

Hemis, Ladakh:
Dedicated to Lord Padmasambhava, a traditional dance festival dedicated to the reincarnation of Buddha is actual Hemis Celebration held at Hemis Monastery. It is not only the folk music, the cultural culinary or the long lost traditions that attracts one but also the breathtaking view around the place. Thousands of visitors visit Ladakh every year to experience this spiritual festival and realize that life is much above then just our physical being or what we call as a body. The most famous activity that mesmerizes tourists is the face mask dance and the tantric worship. One cannot miss the trance of experiencing nature.

Rajasthan International Folk Festival, Jodhpur:
The Lands of Rajasthan has a lot of traditions rooted, especially folk art rituals. A festivity organized to promote folk music is every year organized at the grandeur Mehrangarh Fort. Supported by the UNESCO’s “People’s Platform for Creativity and Sustainable Development’ RIFF has famous international artists featuring exclusively in the lineup. Originally started with only focusing on folk music, RIFF has now even started including fusion melodies as a part of the enriching journey.

Bandra Wine Festival, Mumbai:
A celebration that literally gives you sadness as soon as it’s over, because you literally were having so much fun that as soon as it ends you start missing the celebration again. Stomping grapes with your partners, grooving over the salsa tunes and socializing with like-minded wine lovers is the greatest attraction of this festival. Tasting food from across the nation, enjoying a live band and sipping one of your favorite wines is something that one may find common here. A leisure festivity, where you just need to relish the taste, every year thousands of visitors flock to Mumbai just to uncork some of the best wines of India and the world.

National Street Food Festival, Delhi:
Organized by the National Associate of Street Vendors of India NSFF is held in Delhi since past 3 years offering some of Delhi’s most famous delicacies and street food. There is something for everyone, no decimation of whether you being a vegan, vegetarian, nonvegetarian or Jain. The three-day festival had more than 50 street vendors across Delhi celebrating culinary arts almost touching all the recipes across India. So must make sure to have his gastronomic check after being to this grand eating feast fest.

Kila Raipur Sports Festival, Punjab:
From the land of power and Lassi comes this fantastic festival where contemporary Desi sportsmen participate in traditional Punjabi rural sports including cart race, rope pulling, Kabbadi, Patang Bazi and various other sports. Thousands of tourists and even foreigners flock to Punjab every year to take a glance on the sportsmen spirit of maintaining the age old legacy. Imagine since half a decade every year in a single playground, people from more than 7000 villages participate and strive for victory. The main attraction during the festival is the cart race as the bulls of different breeds are left open to get caught by the brave sportsmen of Punjab.

Vautha Fair, Gujarat:
Donkeys and camels everywhere, and finding the best one are the essence of this fair. Vauthaa animal fair is the largest animal fair in Gujarat held at Sangam Tirtha where 7 holy rivers meet and people come from varied regions of Gujarat and India to trade their animals. The Vautha village has a population of only 2000 people but on this holy fest, around 500,000 visitors flock every year to this small town, located hardly 50 km near to Ahmedabad. It is believed that the sacred purifying bath in the sacred river on Kartika Purnima removes all sins, this might turn out one reason why every man woman child must go to see this mindful chaos.

The Ambubachi Mela, Assam:
Usually celebrated during the monsoon season Ambubachi Mela is also called as Ameti or Tantric Fertility Festival. Held at Kamakhya Temple in Assam, the festival is dedicated to the yearly menstruation course of goddess Kamakhya, the mother Shakti. Tourists usually come up to see the Tantric Babas who usually live in seclusion and relish the natural beauty around this mountain, while the temple doors are closed for three days.
As a follow up to this feature, stay tuned for a feature that shall let you feast upon the not so lime-lighted International  Festivals that should be on every wanderlust wish list.
Image Source : Internet
Graphics : Romanch Soni
< previous next >