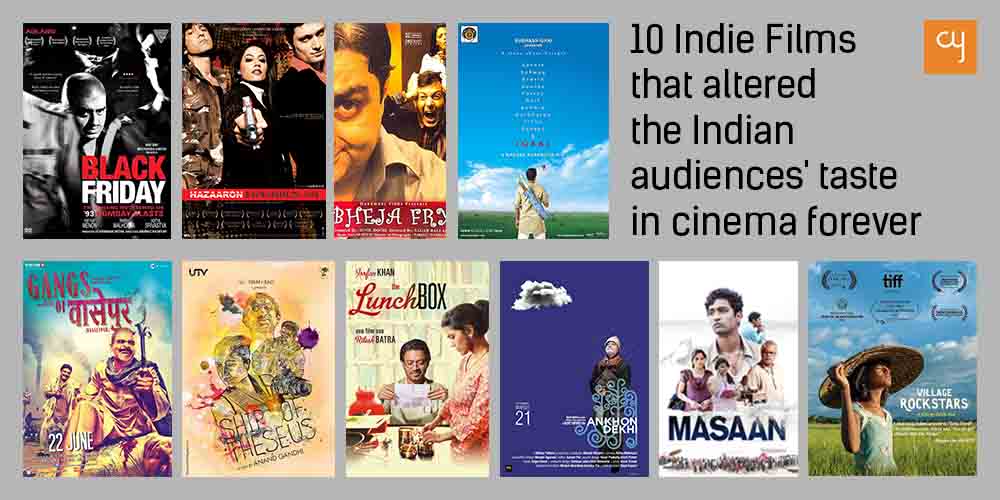 While commercial Hindi movies have hogged the attention of Indians, there are various Indie & off-beat movies in the shadows that puts forth some of the freshest ideas and techniques. These films apart from being cinematic achievements have also played a big role in shifting audience perception and acceptance towards the new vocabulary of filmmaking in India. Here, we list down 10 such films released over last 2 decades.

Cinema is one of the biggest contributors to the entertainment industry. And people, especially in India, love it. While being seventh biggest box office market worldwide, Hindi Film Industry aka Bollywood, is constantly buzzing with new ventures. The quintessential Indian film is a potpourri of masala action, over-the-top drama, item songs and super star cameos. However if we look at some of the successful releases on past couple of years, the trend seems to be changing. Offbeat themes, unconventional characters, song less routines – elements that were considered untouchable in mainstream have found resounding acceptance from audiences all across. Zoya Akhtar’s Gully Boy, Saket Choudhary’s Hindi Medium, Shoojit Sircar’s Piku, Anubhav Sinha’s Mulk and Article 15, the Ayushman Khurana brand of films like Shubh Mangal Savdhan and Bala. Many experts believe this is the best time for Indian Cinema in decades. This is a new development, and we believe the seeds for this change were sown long back.

Post 2000s the wave changed, and a slow but gradual process of merging of the two parallel lines began. Popular film stars like Aamir Khan started creating his films that were meaningful and yet entertaining. He chose to star in a low key film of his own production Dhobi Ghaat, which brought in lot of new eyeballs to the parallel genre. The upsurge of filmmakers like Ram Gopal Verma, Anurag Kashyap, O Nir, Vishal Bharadwaj pushed the envelope and we have come to the point where the two parallel lines of Indian cinema seems to be merging.

Here we shall look into 10 films, released over last two decades, that we believe created the gradual shift, merging the two parallel thoughts of film making in India. These films apart from being cinematic achievements have also played a big role in shifting audience perception and acceptance towards the new vocabulary of filmmaking in India, one that is less fantastical, more realistic and yet entertaining enough.

This Sudhir Mishra directorial takes its title from a poem by Mirza Ghalib. The film set during the times of Indian Emergency, tells a textured tale of India, through the lives of its three protagonists. The socio-political unrest and the shifting ideologies, the transition from the Gandhian era towards a more capitalist era are weaved into the dramatic narrative,  giving viewer a chance to decode the complex narrative of the making of modern India. The film received a lot of appreciation for its brave characterization, with each of the three lead actors Kay Kay Menon, Shiney Ahuja and Chitrangada Singh receiving critical acclaim. The film also benefitted from its soaring music composed by Shantanu Moitra and written by Swanand Kirkire.

Written and directed by Anurag Kashyap, Black Friday is based on Hussain Zaidi’s book Black Friday: The True Story of the Bombay Bomb Blasts. The film narrates the true events which led to the 1993 Bombay bombings, it uses a compelling plot and a haunting soundtrack (Indian Ocean) to create a never before experience for the Indian film viewer. The film, Kashyap’s second directorial after the controversial ‘Paanch’ (which never got theatrical release), is considered by critics in India and around the world as a master-piece and  till today is considered as Kashyap’s best work. The film is epic and raw, and along with narrating the brutal story it raises pertinent questions amount religious intolerance and terrorism. The film was supposed to release in 2004, but it faced judicial challenges and finally got a theatrical release in 2007.

Nagesh Kukunoor is among the early ones to introduce Indian audiences to different cinema. Hyderabad Blues, his debut film was a massive surprise- hit and it gained tremendous popularity among the campus crowd of India. Iqbal is the story of a cricket-obsessed deaf and mute boy from a remote Indian village, who overcomes multiple challenges to fulfil his dream of becoming a cricketer and playing for the Indian Cricket Team. The film excelled in every department – writing, screen play, acting, music and direction, everything was top-notch.  The film received the National Film Award for Best Film on Other Social Issues.

Adapted from 1998 French Movie Le Dîner de Cons, Bheja Fry directed by Sagar Ballary was the break out comedy film of the year. One of the most unexpected box office hits, the film is a comic depiction of a outlandish premise wherein an elite business person takes pleasure in inviting ‘idiots’ home and ridiculing them for fun. Led from the front by the amazing Vinay Pathak, the film benefits from solid writing that provide enough twists and turns, creating laugh-out-loud situations.

We had to include another Anurag Kashyap film in this list. The two part gangster crime drama is among the the best cinematic achievement in India for narrating a crime saga rooted in the Indian milieu. Centered on the coal mafia (Mafia Raj) of Dhanbad, and the underlying power struggles, politics and vengeance between three crime families story spans from the early 1940s to the 2000s. Loved by cine goers and applauded by critics for its vision and depth of storytelling, the film is a milestone for the Indian film industry, as far as the merging of realism and fantastical narratives is concerned. Critic Danny Bowes of RogerEbert.com called it  “[o]ne of the most ambitious gangster films ever made, and quite possibly one of the best”, writing that it is “worthy of discussion alongside Coppola’s first two “Godfather” films, or Leone’s “Once Upon a Time in America.”  The film substantiated Manoj Bajpayee’s position as the leading acting talent in Hindi film industry and it also gave wings to yet another talent, Nawazuddin Siddiqui, who later on went to give many sensational and off-beat hits.

One of the most visually stunning films to come out of India,  Anand Gandhi’s debut film went on to become the most successful international arthouse film at the Indian box office. In 2014, it won the award for the Best Feature Film of the year at the 61st National Film Awards. The film is a depiction of the Theseus paradox, a concept of western philosophy, in the form of a narrative film. The film explores stories of a visually challenged photographer, an ailing monk and an enterprising stock broker. Through their story the film discusses the idea of identity, justice, beauty, meaning and death. The film beautifully expresses how each one of are living in the cave of their own existence, falsely believing the temporary as having permanence.

Written and directed by Ritesh Batra, The LunchBox is an endearing tale of two lovelorn individuals who are connected by fate through the unlikely medium of a Lunch Box. Written in epistolary method, the love story unfolds as Sajan, played by a terrific Irfan Khan receives lunch from Ila, played by the beautifully understated Nimrat Kaur, by way of an accidental mismatch. The beautifully nuanced film touches upon subjects of loneliness and love, and people’s spirit to challenge destiny so as to remain happy. The film became Irfan Khan’s highest grossing Indian film, until Hindi Medium took over in 2017.

Written and directed by Rajat Kapoor Ankhon Dekhi is a fine film with deep philosophical undertones. Powered by an achingly beautiful performance by Sanjay Mishra as the simpleton Bauji, the film shows us the value of living by our own choices. The film bases itself on the absurd premise, Bauji’s belief that he will only believe what he has seen; leading to an euphemistic finale. The film received multiple accolades and has been generously appreciated by all leading critics. Watch the film for its performances, for its affectionate portrayal of family bonding and above all to understand the beauty in living by one’s own choices.

The debut film by Neeraj Ghaywan, Masaan is a deeply affecting film that showcases the pulse of small  town India in an extremely engaging manner. Written by Varun Grover, who has also penned by lyrics the film beautifully weaves the character of Banaras in the narrative. The movie follows two parallel plots, one of a woman struggling with social stigma of pre-marital sexual relations and the other which narrates a blossoming love story, the two strains eventually meet on the banks of Ganga. The film has fantastic music composed by Indian Ocean and it makes the film so moving that the visuals and the music lingers in your mind, long after you have seen the film.

Recipient of the National Film Award as the Best Film in 2018, Village Rockstars by debutant Rima Das in an excellent film that offers a poetic view of the contemporary rural India. The Assamese language film is a coming-of-age story of 10 year old Dhunu who dreams of having her own rock band, and desires to own a real guitar. The story takes a turn when she is faced with tumultuous challenge of devastation by floods and brings us close to her ordeal in coping with life’s realities. Through the perspective of the tween protagonist the film offers an innocent view of life and gives the audience a chance to look at life without any societal filters.

We end our list with this. Film Critic Dalton L declared Village Rockstars as “a milestone film of sorts”, adding, “Village Rockstars epitomises the trials and tribulations, and heralds the coming of age, of a filmmaker, of her protagonist, and of the indie film movement in India”.

All of these films are available on streaming platforms, and can be a good diversion during the quarantine period the world is facing due to COVID-19.